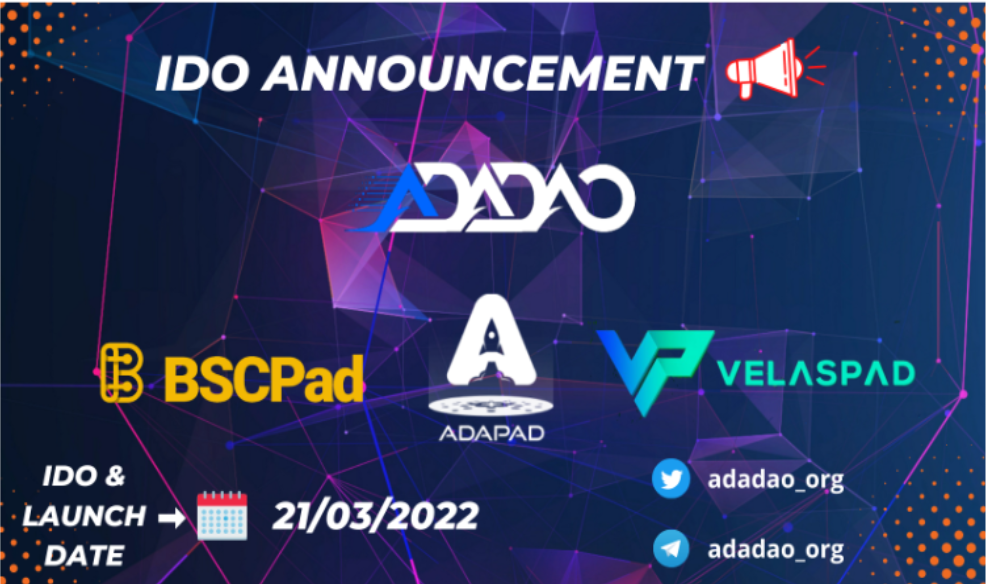 ADADAO has partnered with BlueZilla for  IDO on its platforms. BlueZilla has announced to conduct the IDO on ADAPad, BSCPad, and VelasPad launchpads. IDOs in the BlueZilla ecosystem have a tremendous reputation. For example, the average ROI on BSCPad is 6400%. ADADAO is expected to follow the same trend as other BlueZilla projects and presents a great opportunity for early entry on the first day.

ADADAO is a DeFi protocol on the Cardano blockchain which facilitates the creation of fully collateralized stable coins leveraging Native Cardano Assets. AUSD is the Stablecoin generated using this protocol, which is on-chain overcollateralized using Bluechip Cardano assets. ADAO is the utility and governance token that allows users to decide how the protocol functions and also gives them a share of the fees raised through the protocol.

The protocol has a unique design with the following salient features:

BlueZilla – A force to be reckoned with

BlueZilla  is a blockchain incubator that helps some of the most cutting-edge projects in the industry get off the ground through its launchpads: BSCPad, Tronpad, ETHPad, KCCPad, NFTLaunch, ADAPad, VelasPad, GameZone, PulsePad, DotPad and MetaVPad. In this way, they provide security to investors, while allowing them to participate in the early stage investments of their partner companies. The platform is a renowned incubator that nurtures and props the founders’ ideas before providing further development, legal, technical, and marketing support as the project finds its footing.

The ultra high demand of tokens launching on BlueZilla  has resulted in massive ROIs in its IDOs. For example, WagyuSwap—a DEX on Velas—has a 106X ROI and is within the territory of TronPad, which rallied around 255x. A standout performance thus far is the vertical rise of ETHPad’s $ETHPAD, which currently has an ROI of approximately 170X. Recently, MetaVPad did a 1290x, Valhalla and Astroswap did 630x and 527x respectively.