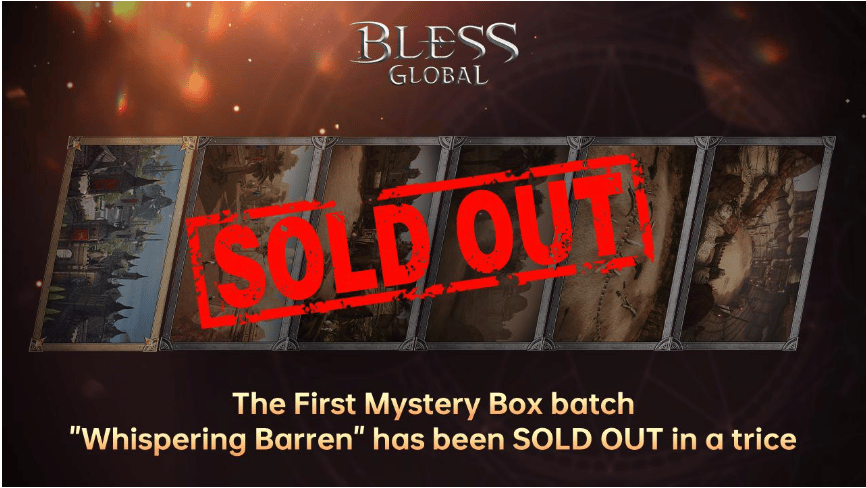 Whispering Barren, Bless Global’s first limited-edition Mystery Box series, was sold out right after going on sale, drawing great attention in the market. When things are bearish, such an achievement wouldn’t have been possible if it weren’t for the vibrant game ecology, solid market recognition, and the numerous prospective users who are loyal and highly engaging. These factors together ensure players an opportunity to monetize their in-game assets in Bless Global.

On Oct 18, Tigon Mobile, the subsidiary of Longtu Korea, started to sell the first batch of Whispering Barren at 19.9 USDT each with a limited stock of 2,000 on the NFT platform PocketBuff. The series contains desert-themed Mystery Boxes of Bless Global, a new GameFi based on the PC game Bless Online.

While the GameFi industry, alongside the entire market, is in a downturn, Whispering Barren shows the opposite. All Mystery Boxes were sold out right after going on sale. This special series has attracted substantial attention in the crypto market once it was out.

Though many players didn’t get a chance to snap up the Mystery Boxes, the Bless Global team said on Twitter that there will be a second round of sale, details of which are soon to be announced officially on different platforms.

It is surprising how Whispering Barren Mystery Box turned out to be a big hit against the backdrop of a declining market. Of course, the profitable in-game assets inside the box are one reason for its popularity. But what’s more important is the acknowledgment and recognition the game received from the industry as a whole.

1.What Can Players Get from Whispering Barren?

Reportedly, users who purchase the Whispering Barren boxes will randomly obtain one of the following two NFTs: Postcards and VIP PASS. 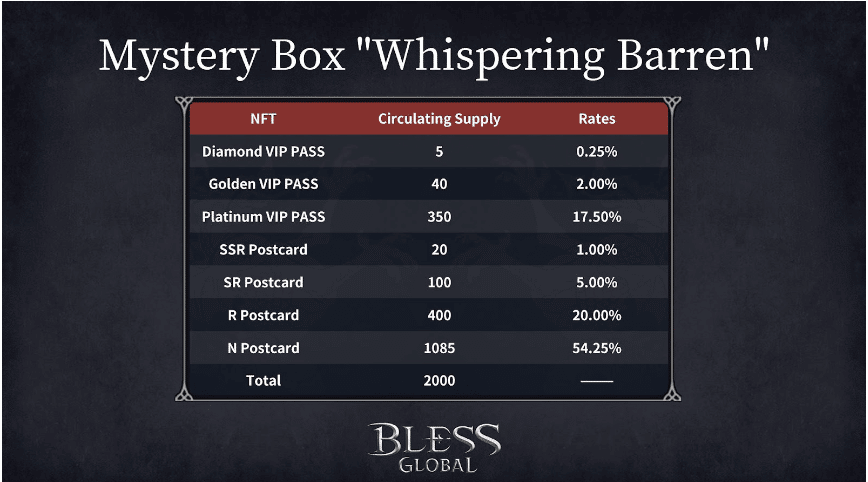 Each Mystery Box sold in the first batch has six items in its pool, including five different Desert Postcards (which can appear multiple times) and one hidden Sculpture Postcard (which appears randomly).

A set of five different Desert Postcards can be redeemed at a specific time for the limited Mount NFT Iron Lion, a rare and vital in-game asset that can be traded in the market and greatly boost Stats of the characters when deployed, including ATK (Attack), HP (Health Point) and SPD (Speed).

The lucky players can get the one and only Sculpture Postcard of its series, a hidden limited-edition SSR that appears randomly in the Whispering Barren Mystery Boxes.

A full set of Sculpture Postcards stamped with different scenes can be redeemed for a Diamond VIP PASS with the highest bonuses, beta access, and much more.

Of course, players can also get VIP PASS directly from the box. There are Platinum (the most common PASS), Golden, and Diamond (the rarest). Only 5 out of the 200 Diamond VIP PASS available were sold in the first batch, which makes them extra rare.

The VIP PASS is all about boosting your mining efficiency, such as Corestal mining. You can consume Corestals in the game to obtain BLEC, a Wallet asset that can be used to buy NFTs on PocketBuff. Different VIP PASS will offer players different benefits and bonuses.

To conclude, players’ earning expectations of these in-game assets and the wealth effect behind it added indispensable fuel to the booming sales. But again, recognition from the industry of the game itself as a treasure with an established presence in the current market is the underlying contributor.

2. Bless Global Has the Potential to Become a Phenomenal AAA GameFi

Bless Global is an AAA-level MMORPG GameFi based on the world view and content of the Web 2.0 PC game Bless and revealed by Tigon Mobile, a subsidiary of KOSDAQ-listed company Longtu Korea.

As a benchmark manufacturer, Longtu Korea has a high market presence in this field, owning an extensive collection of AAA games. Sword And Magic and Yulgang Mobile have won the favor and support of more than 10 million users worldwide. Over the past decade, the company has provided game services to more than 200 million users.

Longtu Korea has already explored GameFi before. Yulgang Global released by Tigon Mobile went popular after launching. 50 servers were set in Asia and 20 in North America. More than 5 million players praised it as the game launched and more than 1 million downloaded it on Google Play. Bless Global’s pre-registers have now reached 1 million, which shows Tigon Mobile’s experience and capability in the design, promotion, and marketing of GameFi. In addition, this lays the groundwork for the soon launch of Bless Global.

Although GameFi experienced a short outbreak period last year, it was difficult to continue the momentum after the market froze. Therefore, GameFi is still at an early stage. One reason is that GameFi players are mainly speculative crypto investors, different from traditional Web 2.0 gamers. Lacking loyalty and stickiness, investors pay attention to profits while gamers focus on the experience.

Beyond that, existing GameFi products are crudely made, thus not attractive to Web 2.0 users, and also hard for crypto investors and other potential Web 3.0 players to experience joy.

Bless Global applies an NFT-centered GameFi 3.0 economy model, which avoids the negative effects of the Token downturn in the bear market and allows users to focus on gameplay, not just P2E. The values of assets are anchored by rarity and the players’ preference, building a reliable transaction environment.

Consequently, Bless Global has the potential to introduce a large number of Web 2.0 users and other resources to the industry, so as to achieve remarkable innovation.

As an AAA MMORPG, Bless Global follows the well-crafted features of Bless. Based on an advanced development engine, Bless Global has developed a variety of designs, including multi-dimensional game scenes, environments, biological systems, model faces, and vivid material performance. A game with a grand story and awesome visual presentation is born. 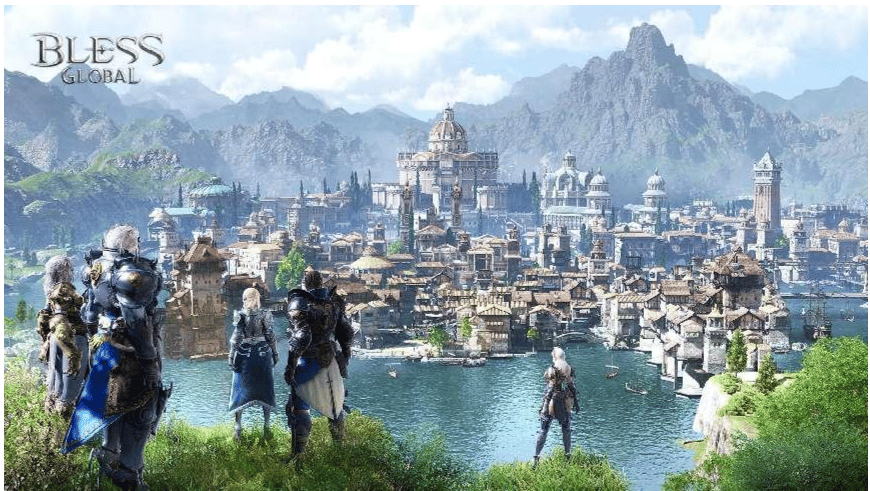 Additionally, Bless Global has designed a range of gameplay.

Bless Global has different classes with varied traits. Players are free to choose from Ranger, Priest, Berserker, Crusader, and Mage. Obtain NFTs-like mounts with bonus stats to raise power and get more fun.

Also, Bless Global has plenty of modes in the game such as PVP, PVE, developing systems, etc. Players can level up their characters and craft items to make selves stronger and explore this epic world through various gameplay. They can also fight against other players with strategies and even have team battles to enjoy an immersive sense of achievement and motivation.

Bless Global is bringing the ultimate sensory enjoyment to players in its own way, combining perfect comfort and wonderful impact. With this in mind, it further boosts extreme fun and long-term playability, while giving players a profound emotional experience.

At present, it lacks phenomenal applications in GameFi area and AAA game is expected to take the lead role (there are almost no such games in the industry now). The game is well-made by an experienced traditional game manufacturer with epic stories and well-known IP. Therefore, Bless Global must have considerable market prospects.

In general, the popularity of the “Whispering Barren” Mystery Box shows the market’s recognition of Longtu Korea and the gaming ecosystem of Bless Global.  A strong ecosystem and massive potential loyal, sticky players are the guarantees of in-game assets’ value. Bless Global is expected to fill vacancies in AAA GameFi. It also has the potential to be phenomenal and will drive growth across this industry.