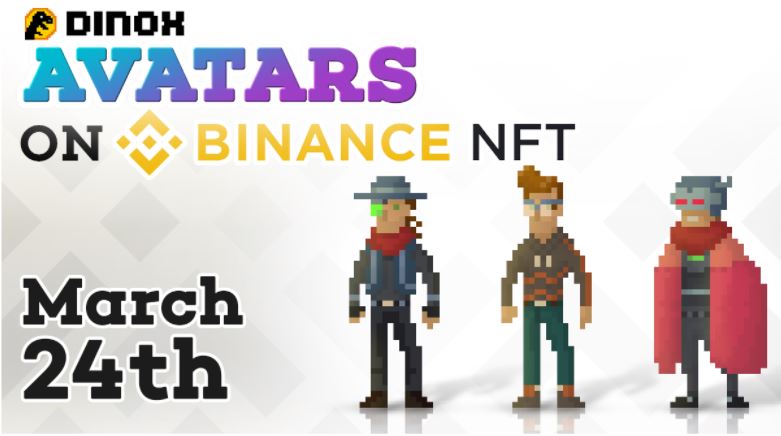 DINOX World is an expansive metaverse gaming world where NFT dinosaurs come to life! Currently in its public beta testing phase, the game is constantly introducing new features and putting to use the valuable feedback from more than seven thousand daily active users to continuously improve gameplay and user experience.

One of the highly anticipated rollouts for the game is the introduction of DinoX Avatars – fully animated and unique game representations of the player in DINOX World. Each Avatar will have special abilities (passive, active, or both), which have the potential to enhance the strength of a player’s dinosaur team during battles, increase their earnings after defeating enemies, revive a fallen dino during combat, just to name a few.

In addition, each Avatar also has the capacity for a temporary ability that will expire after some time or a specific number of uses. These abilities are NFTs themselves (in the form of Ability Cards) and, just like the Avatars and Dinosaurs in DINOX World, are tradeable on NFT marketplaces such as OpenSea and will be available on DinoX’s own marketplace targeting release in Q2 of this year.

There are a total of 4,500 DinoX Avatars being minted and only 1,500 available in the DinoX Avatar Sale on Binance NFT. Meaning, they’re going to be a rare and desirable commodity in DinoX’s dinosaur metaverse (aka Dinoverse), so participants will want to be fast in the upcoming sale to ensure they get one of these coveted Avatars.

Every Avatar will differ from one another visually and, making them even more unique, will be divided into five groups of rarities – COMMON, UNCOMMON, RARE, LEGENDARY, and MYTHICAL, well known to DINOX World players and owners of their NFTs. Higher rarity Avatars have stronger abilities, making them more beneficial to the player and, therefore, more valuable on the open market.

DinoX’s Avatar sale on Binance NFT will be done in a “mystery box” style, where all the 1,500 Avatars are sold at the same price and the purchaser won’t know which Avatar or rarity theirs is right away. DinoX will host a special event for revealing the Avatars at a later date, so buyers have even more anticipation to look forward to.

“Partnering with Binance NFT for our Avatar sale is a huge milestone for our project. Our team’s hard work and dedication are reflected in each major accomplishment we achieve and we’re just getting started!” – Filip Tomaska, DinoX CEO & Co-Founder.

To keep the community informed, DinoX constantly posts on its Twitter and the core team is very active on Telegram and Discord.

DinoX is building an entire ecosystem for collectible, tradeable, and playable NFT dinosaurs living on the Ethereum & Polygon blockchains. Their dinosaur-themed, play-to-earn game – DINOX World – is a fun and interactive digital gaming world where pixel-art NFT dinosaurs are playable characters. In their game, you can own your very own dinosaurs and take care of them, breed them, train them, and even battle them against various other creatures. The DinoX Metaverse (aka Dinoverse) ​​is not only about dinosaurs but also includes NFT Avatars and Lands which expands the player experience.

ApeCoin and the story behind becoming ‘most traded’ among Ethereum whales