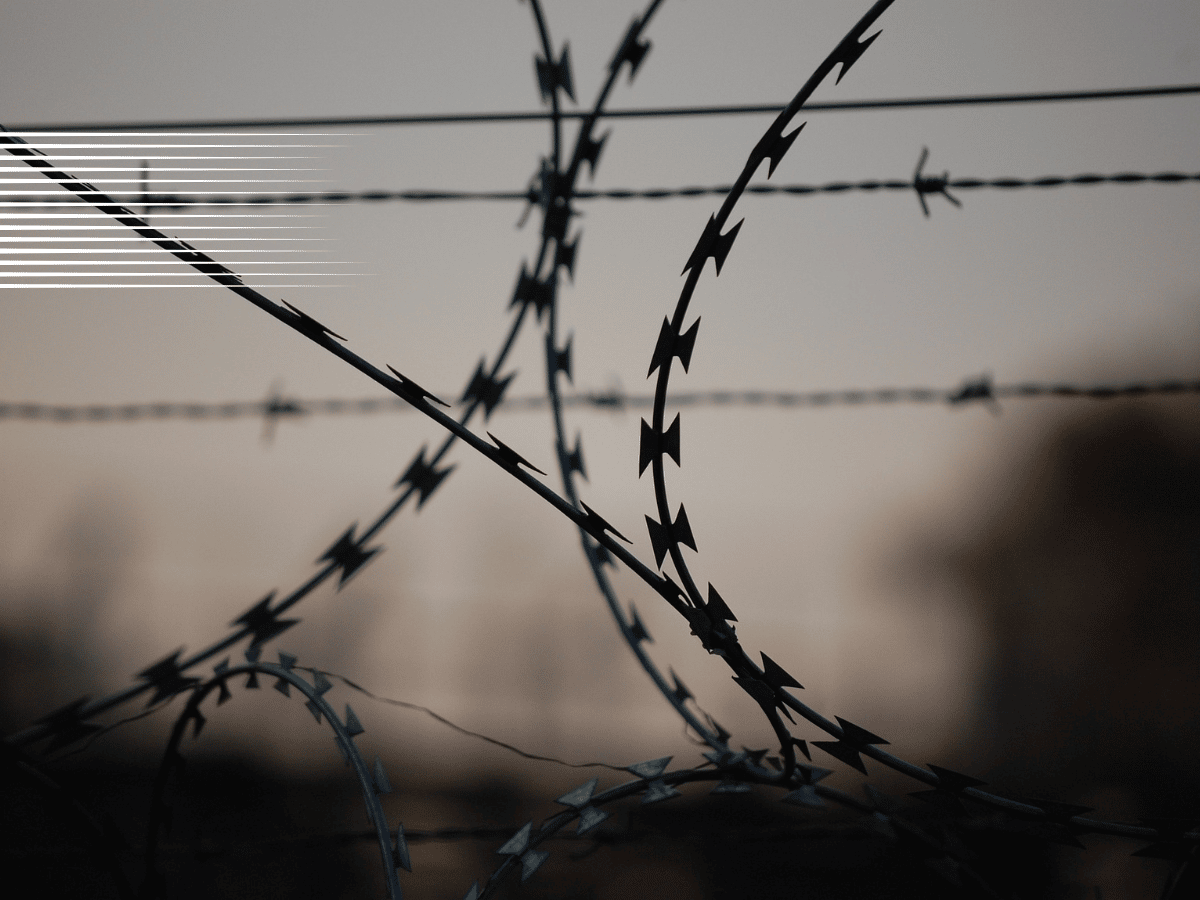 Litecoin [LTC] has been in a volatility bondage. This was the opinion of John Bollinger, renowned analyst, and inventor of the famous indicator, Bollinger Bands.

Speaking in anticipation of the 2022 Litecoin Summit, Bollinger noted that LTC had been stuck in extremely low volatility regions for five months. He also pointed out that there was a squeeze on the weekly LTC/USD chart as of 26 September.

Litecoin has been in a tight trading range for five months. Now you can see a Squeeze on the weekly chart. I will talk about this at the Litecoin summit.https://t.co/vcryn5xWRj$LTCUSDhttps://t.co/dE02stUoVU

Any truth in this?

Interestingly, Litecoin did not only show that kind of volatility against the United States Dollar alone. On the daily chart, LTC had done the same against the dollar-pegged Tether [USDT].

While the Bollinger Bands (BB) showed that there have been attempts to exit into extreme levels, it has been met with resistance. For example, between 9 June and 15 June, LTC tried to exit the low volatility status but was resisted. It was a similar case around 26 June and 6 July, and lately, 13 September, and 21 September. 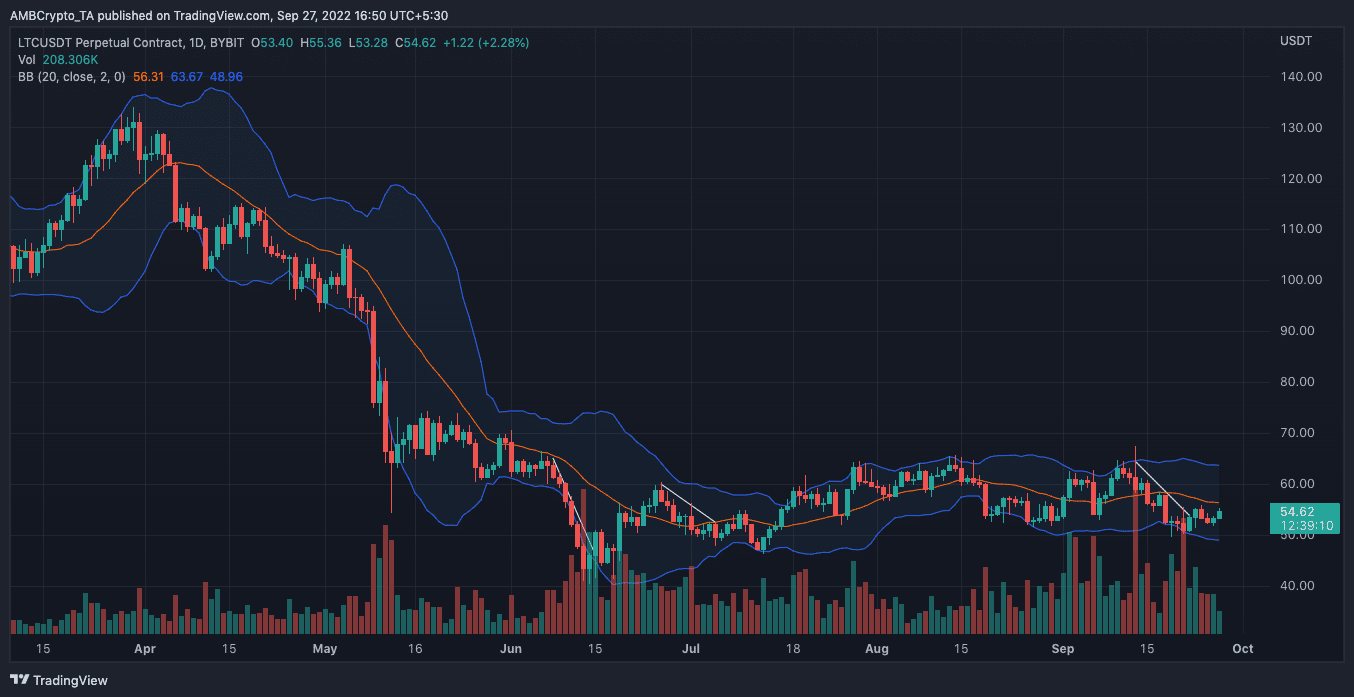 However, it may seem that LTC was on the verge of breaking out from the shackles of the five-month long state. With its price at $54.27, and close to the highest it had reached in seven days, a move into high volatility could be possible. At the same time, it may also be too soon to assume that “help” was close to the horizon.

Assessing the Awesome Oscillator (AO), LTC did not seem solidly prepared to extend the current greens. Based on the AO indication, a -2.85 value was not enough grounds to project a sustainable rally, especially as the buying momentum was below the zero-histogram point.

However, the signs of picking up a bullish momentum could not be ignored considering the green standings. Even with that, LTC investors may want to keep expectations at the lowest level. A look at the Chaikin Money Flow (CMF) did not reveal any alignment with an elongated rally at -0.11. Hence, LTC could lose its 4.48% uptick in little to no time. 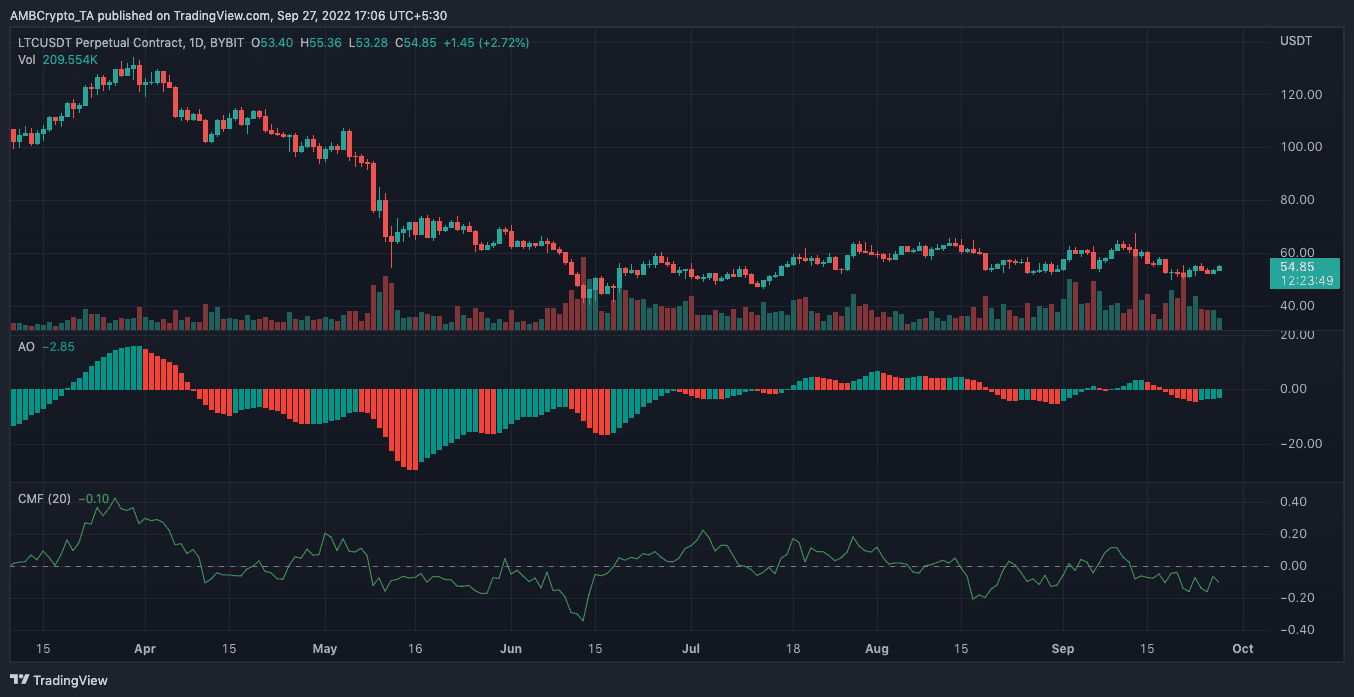 As for LTC’s on-chain metrics, it was not all roses. Santiment showed that its volume was up to 475.27 million from the previous day. On the development activity, inverse was the reality as it decreased to 0.1. Despite the ups and downs, LTC long-term investors would be waiting to hear Bollinger’s side of the story.  Still, it could be considered a good take to anticipate the sideways movement in the short term.