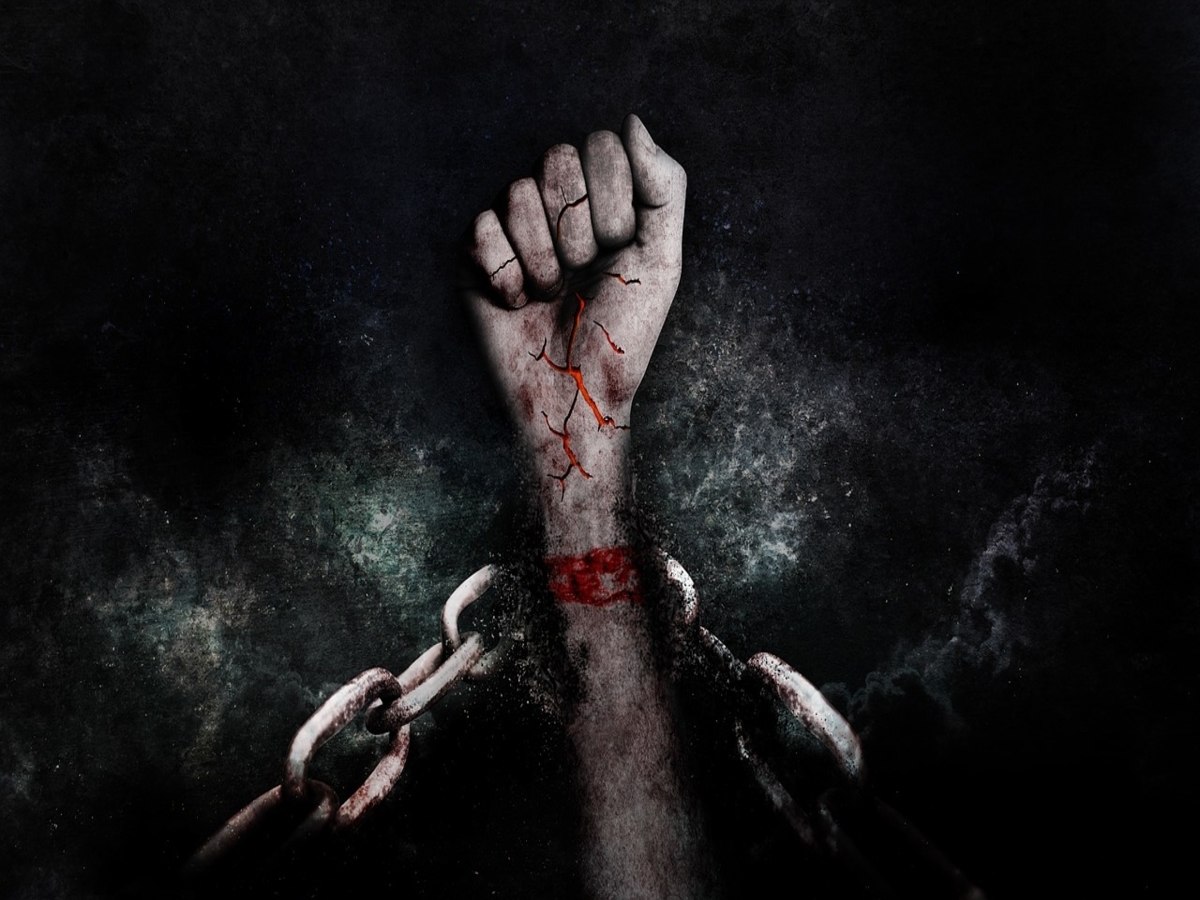 Bitcoin’s market is devoid of any major price action of late. In fact, the king coin has been restrained within a rangebound zone for close to two months now. At the time of writing, BTC had already lost its $33k support level and was trading at $31,885.27.

Nevertheless, Bitcoin now needs to buckle up and brace itself for an unusual event – An event that is set to have a drastic impact on its price. Before throwing light on the aforementioned event, however, it is essential to first examine Bitcoin’s current state. 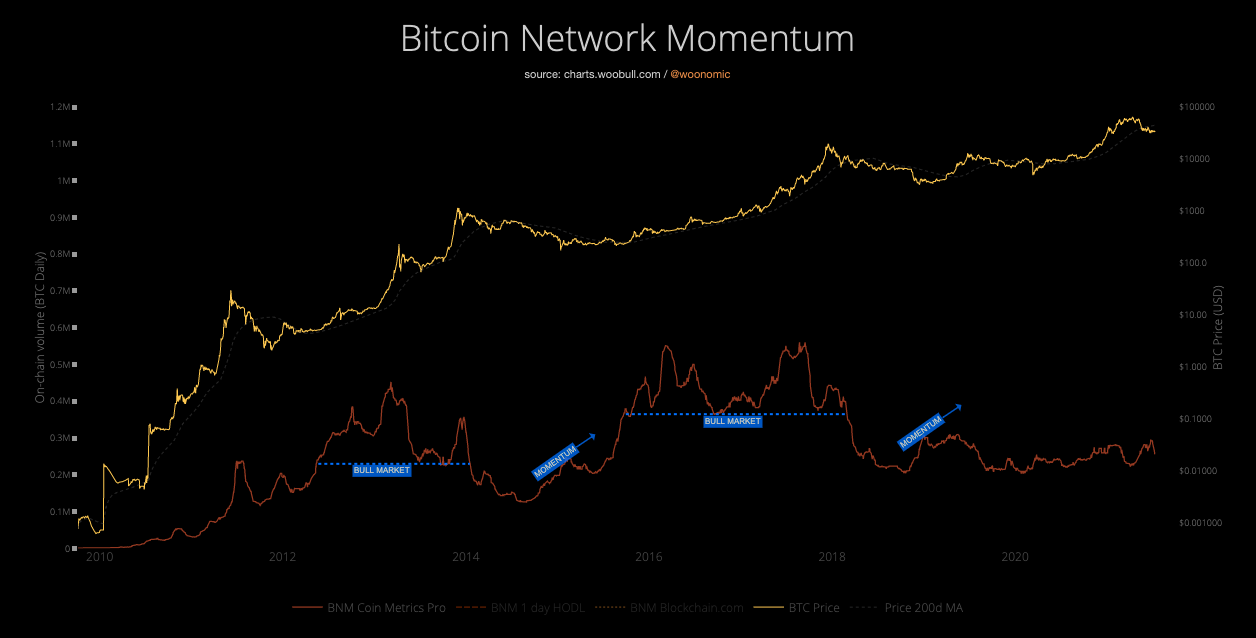 Willy Woo’s Network Momentum chart, at the time of writing, suggested that Bitcoin’s bull run had not yet kickstarted. Network momentum has always been a crucial factor in determining the fate of Bitcoin. As indicated by the chart, the momentum rose significantly before the initiation of the bull runs of 2013 and 2017. However, post-2019, the same has been stagnant.

Does the king coin’s slack momentum imply that the market cycle has skipped a phase this time? Well, not necessarily. Looking at how things have unfolded for Bitcoin in the past, it wouldn’t be wrong to claim that a bull run is positively on the cards. However, the aforementioned phase might delay itself a little further and might continue to tease the market before actually arriving.

Additionally, it is worth noting that Bitcoin has entered a coiled-up volatility zone. That, according to popular trader John Wick, could present itself either as a breakout or fakeout. Highlighting the intensity of the aforementioned move, Wick recently tweeted,

“VIOLENT move incoming & imminent. This tells you its time to start paying attention. It can resolve as a squeeze breakout or fakeout in the coming weeks.”

It should also be noted that squeezes do not happen on a frequent basis. The previous two instances have been pretty dramatic though. When the squeeze set foot in last time, Bitcoin’s price rallied from $9100 to $60k. Post that, the $60k squeeze fakeout facilitated the king coin’s crash to $30k.

Notably, the first squeeze took Bitcoin to a stage 2 bull market while the subsequent one eased Bitcoin’s path to the downside. Now, even though the exact timing or the nature of the squeeze seems to be hazy at the moment, Wick was quick to highlight his bias towards the upside. He said,

“It [breakout] could be to the downside or upside. At the moment my bias is to the upside with one of the two following scenarios in white.” 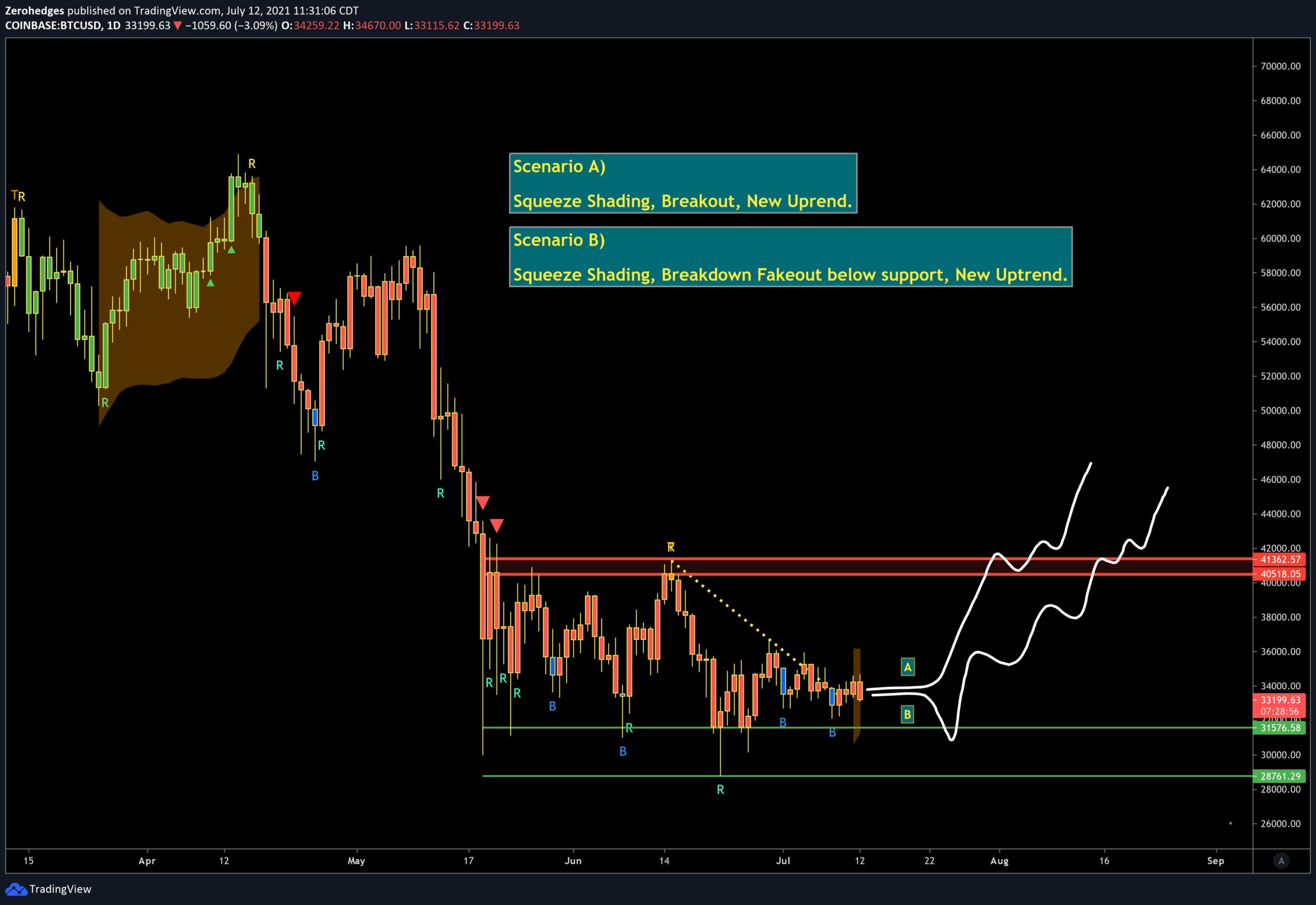 If scenario A unfolds, the coin’s up rally would hardly face any obstacles. However, if situation B unfolds, the up rally will gain pace only after paying a visit to the $30k level. Again, the odds of a fakeout, or downtrend, seem to be less likely because Bitcoin is already in its basing stage at the moment. Past price actions suggest that the second stage, like is usually the case, might be an uptrend.

Now, if at all the uptrend takes place, the momentum indicator would get the kickstart that it has desperately been waiting for and the BTC market would witness some real price action. Once Bitcoin gets out of its rangebound zone and steps into the upper $40k price band, the bull run narrative would start gaining traction again.

What could be the next target for Dogecoin?