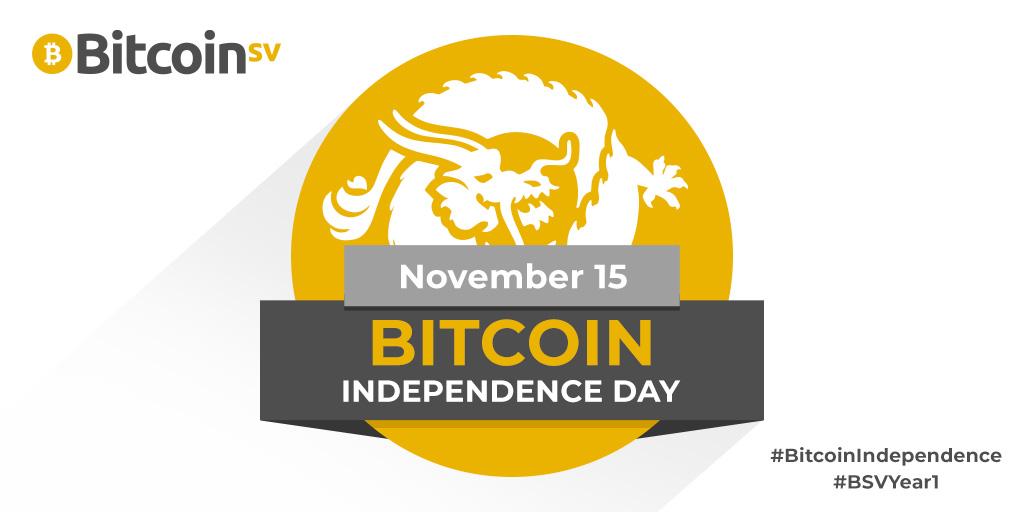 15 November 2019 marks one year since Bitcoin SV [BSV] emerged in the world’s first Bitcoin hash war, to declare independence for original Bitcoin. After years of BTC and BCH protocol developers deviating from the design of Bitcoin’s creator Satoshi Nakamoto and artificially restricting Bitcoin’s capabilities, BSV is restoring the “Satoshi Vision.” While it uses a new ticker symbol, BSV represents the original Bitcoin protocol and finally enables the blockchain to massively scale – just as Satoshi always intended.

In just one year, BSV has been solving the biggest problem facing Bitcoin to date: scaling. BSV currently handles up to 20,000,000 transactions per day and is progressing to be able to handle thousands of transactions per second. This level of capacity can compete with VISA payment network capacity, and supports enterprise usage for tokens, smart contracts, big data and other applications. The BSV network now rivals BTC for more daily transactions [Coin.Dance] on-chain as well as bigger average block sizes. BSV is the only blockchain project massively scaling to support high transaction volume, keep fees super low to enable micropayments and micro-transactions, and provide bigger data capacity for enterprise uses.

And in just one year, application development rapidly ignited on BSV. Examples of real business projects already being built on BSV include:

Unlike other cryptocurrency camps, BSV is regulation-friendly. It recognizes the blockchain’s nature as a transparent, auditable ledger where transactions can be traced and criminal activity can be stopped. The BSV ecosystem also supports compliance with KYC, AML, securities and other real-world legal requirements – which is essential to win business and government confidence for global adoption.

BSV is the only coin with a blockchain that significantly scales [now], has robust utility [now], and is committed to a set-in-stone protocol for developers to reliably build on [almost complete return to original Bitcoin protocol by February 2020]. BSV is also the only coin that adheres to Bitcoin’s original design from Satoshi Nakamoto’s white paper and early writings. In short, BSV is Bitcoin.

For more on BSV, visit BitcoinSV.com and come to the next major BSV event – the CoinGeek conference in London, February 20-21, 2020.

Disclaimer: AMBCrypto does not endorse or support any product or project mentioned on this page. Articles in this category could be sponsored in nature. Readers are advised to do their due diligence before making any financial decisions.

Ethereum could breach wedge to $170 by December