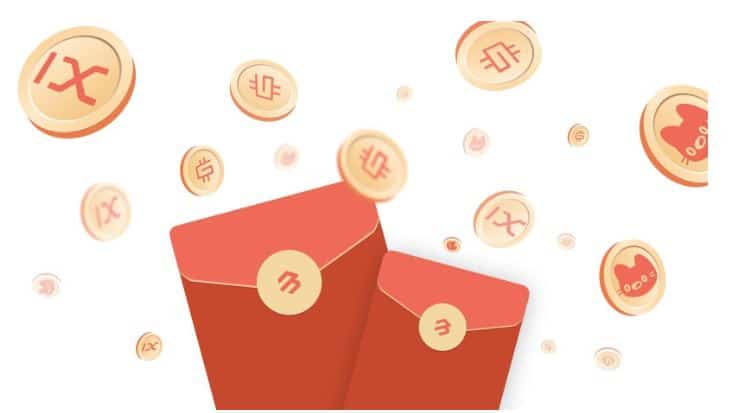 BitKeep, the leading Web3.0 wallet company, debuted the world’s first decentralized Crypto Red Packets to enable its users to share their virtual wealth on multiple mainnets including BSC, Polygon, AVAX-C, Fantom, Arbitrum, HECO Chain, OKC, Optimism, KCC, Fuse, etc. Among these thirteen mainnets, BSC and Polygon accounted for 95% of the Crypto Red Packets sent since the launch of the innovative feature, showing, in a sense, the landscape of global mainnets.

In particular, Social2Earn and Game2Earn communities on BSC and Polygon are embracing Crypto Red Packets with open arms. From June 6th through June 20th, BitKeep is sharing Red Packets through @BitKeepOS on Twitter to reward its royal users.

According to BitKeep Crypto Red Packets Popularity Ranking, in the first week, the most sent tokens are GMT, IXT and MILK. 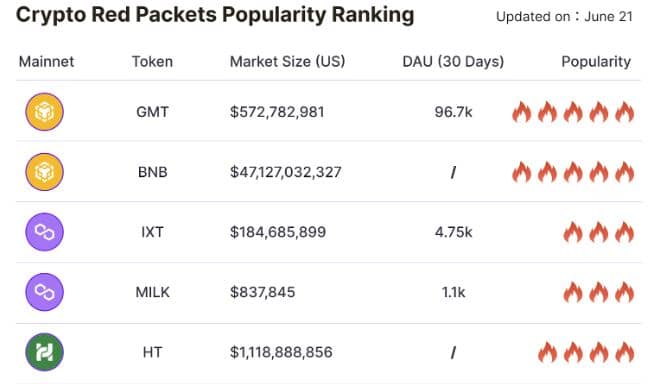 GMT is the governance token of StepN, a Move2Earn game and one of the most popular Web3.0 projects in 2022. Although the plummeting price of STEPN sneakers has roused suspicion about the project being a “ponzi scheme”, the StepN game is still hot. It has a Discord community with more than 770k members and boasts more than 70k daily active users. On April 28, 2022, the price of GMT hit US$4.17, with its total market value reaching an astonishing US$25 billion. But after that, the token price has fallen to a relatively stable range of around $1, making it an ideal choice of token to share through Crypto Red Packets.

IXT is the governance token of Planet IX, a popular Game2Earn project on Polygon. The IXT token was launched on November 20, 2021, to facilitate peer-to-peer transactions in the game. IXT is playing an important role in Planet IX, and it can be used in liquidity mining. Planet IX has a Discord community of more than 56k members. Five thousand players are active in the game each day. The price of IXT is now slightly above $1. The popularity of the game makes IXT the best choice for Planet IX community members to send “Crypto Red Packets”.

The MILK token, on the other hand, is derived from Cool Cats, an NFT project on Ethereum. It’s now used in the Cool Cats and Cool Pets ecosystem. Cool Cats is one of the most famous NFT projects in the world, with an accumulative transaction volume ranking No. 13 on OpenSea. and a total transaction volume exceeding 100,000 ETH. A lot of artists and art collectors have gathered in the Cool Cats community for its unique culture. The Cool Cats project now has a Discord community with 97,000 members and more than 10,000 daily active users.

Cool Cats NFTs generate MILK for their holders, and the token can be used to buy properties and improve combat power. It can also be used in the Cool Cats metaverse for Cool Pets evolution. MILK hit the highest point of $0.187 when it was released on February 15, 2022. But since the token has no supply limitation, its price has slowly declined. A generous number of MILK can be sent without cost you an arm and a leg – a great way to make a stir in the community since it sure looks a lot.

The Crypto Red Packets feature can be a great promotion tool for NFT projects and mainnets, too. For example, for NFT projects, the team could send Red Packets to the community members to cover part of the NFT minting cost, thus encouraging more users to get their NFTs; for mainnets, the stuff can choose to share their native tokens with existing and potential users through Red Packets so that the users can explore different projects on the mainnet with lower cost.

It’s no surprise since BitKeep’s Crypto Red Packets feature is intended to boost user engagement and spice up the community, making it more fun to interact on social media platforms.

Users can share their tokens in Crypto Red Packets. And their friends, once claimed one of the red packets, can make a direct deposit in each of their BitKeep wallets and then use these tokens for transactions.

Maybe the next time when posting “Good morning” in the chat group, you’ll send BitKeep Crypto Red Packets, too.

OVER partners with Sandbox to launch the NFT NYC Treasure Hunt