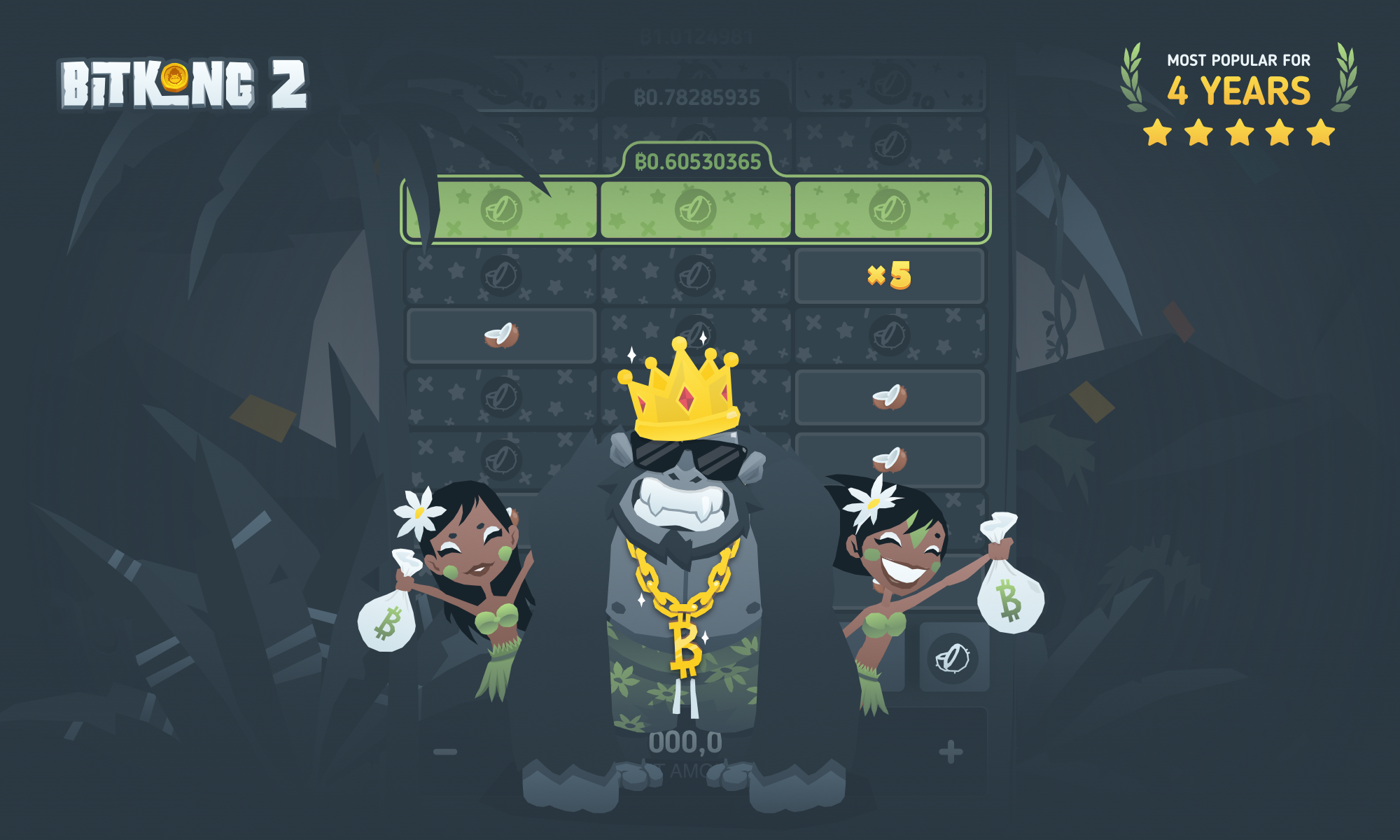 BitKong is an engaging crypto casino that features a free-to-play mode. This game supports a wide range of cryptocurrencies on their site and Android app (BTC, ETH, DASH, DOGE, LTC, and XRP), and they even give users the ability to play with real money, using a Free Faucet, as they get used to the game. But BitKong is not alone in the family. This great ape has two-game brothers called Luckydice and Simpledice.

BitKong has a very defined design with whimsical and attractive graphics. But the design aspect is not the only thing that stands out. The game is carefully well thought from conception since it offers different intuitive gameplay modes.

You have three options to begin playing on BitKong: deposit BTC or another cryptocurrency, use the “for fun” mode, which allows you to test the game for free, or use the bitcoin faucet to earn some BTC and possibly win big without making a deposit. Each of these options works seamlessly, and everything has been highly optimized. At the time of writing this review, BitKong offers just one game, but the staff is working on two new games: a classic Keno game and Poops, a minesweeper.

Even though BitKong offers a single game, it has very engaging gameplay and design, which means that you won’t miss the unnecessary flashy features of other games. BitKong has two sibling websites that feature dice games: Luckydice and Simpledice, and all three games use a provably fair system for the sake of transparency. The “My Bonuses” section in BitKong has been updated recently, so it’s difficult to judge the current display.

How Do You Play BitKong

When you start playing BitKong in Easy mode, you will see four columns and nine rows of cells; you’ll be able to turn one out of four cell options on each row. One of those four options hides poop and uncovering it will make you lose the game, and the other three will allow you to move on to the next row. Each successive row features greater rewards. You can cash out anytime throughout the levels, but of course, the longer you hold, the bigger your potential earnings. 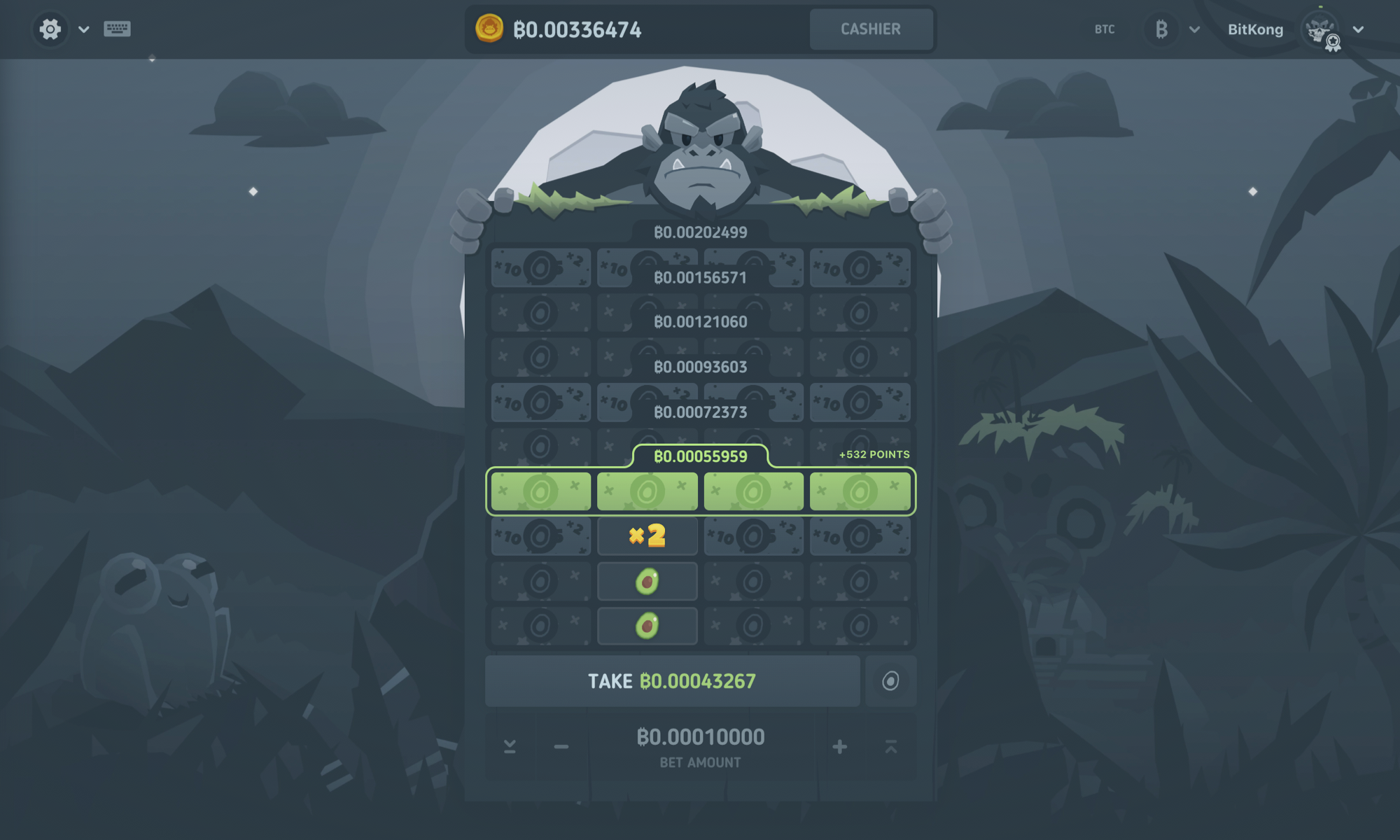 BitKong levels are Easy, Medium, Hard, Extreme, and Nightmare. In the Nightmare Level, just one option out of four allows you to pass on to the next row, which means that the payout is higher. For the Easy level, the payout starts at 1.29x, Medium at 1.42x, Hard at 1.90x, Extreme at 2.80x, and Nightmare at 3.8x. All levels offer the chance to get a random multiplier, allowing you to drive up winnings even further.

The minimum bet on BitKong is 10 Satoshis, but you can bet up to 1 whole bitcoin if you’re feeling lucky. It’s worth noting that BitKong has a house edge of 3%, so bear that in mind.

When it comes to the Cashier, BitKong has a very attractive feature since all deposits are free of charge unless you deposit less than ₿0.0005. If you deposit under the minimum, a ₿0.00005 fee will automatically be deducted from your deposit. BitKong allows deposits from Legacy and Segwit addresses, and they even support lightning network deposits; lightning has just a ₿0.00001 minimum deposit. 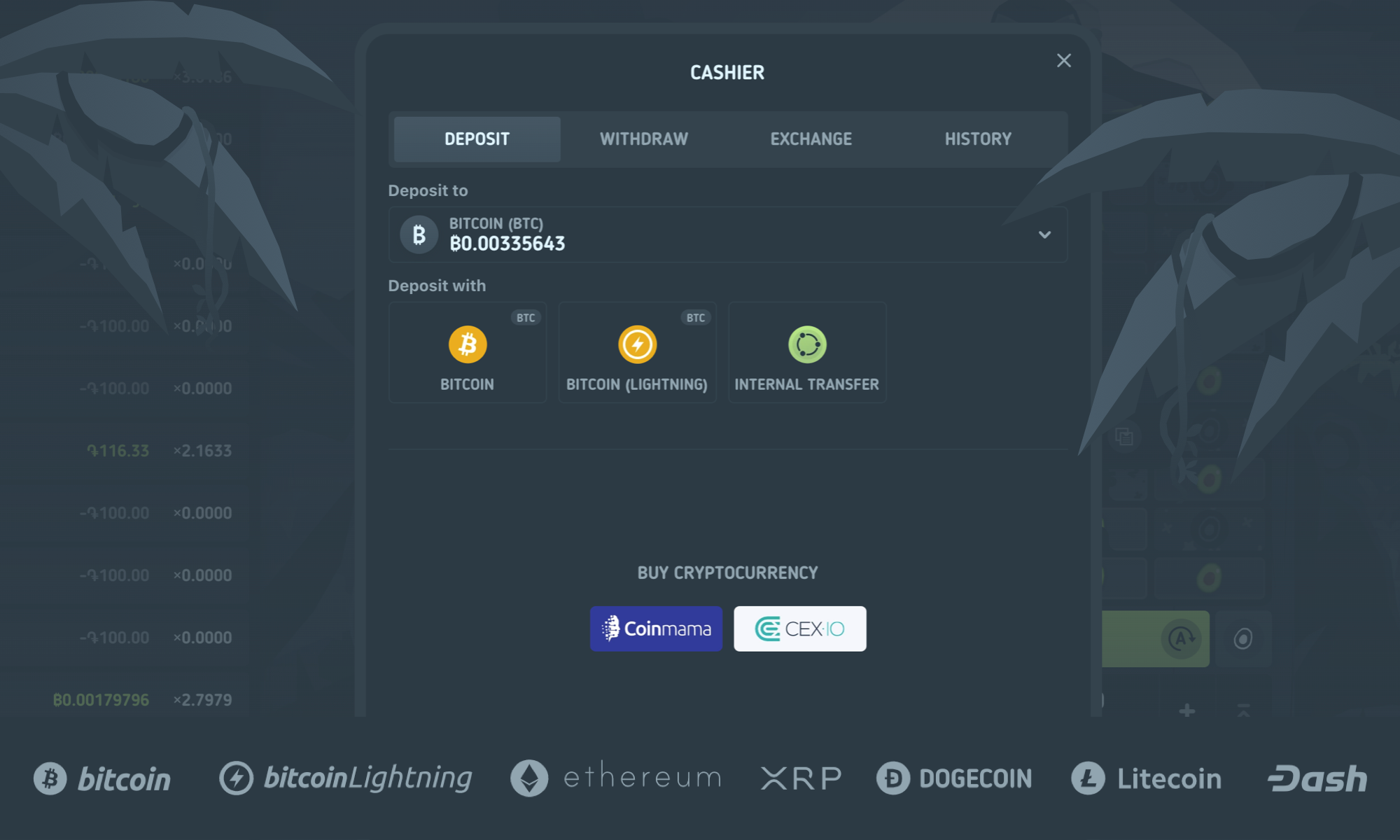 BitKong charges a regular fee of ₿0.0001 for withdrawing, which is the same as other casinos. Still, you have the option of speeding up the transaction by choosing a high-priority withdrawal and paying  ₿0.00025 if you need your funds immediately. You can also exchange your bitcoin for other cryptocurrencies inside the BitKong casino.

Players can enjoy a lot of rewards and win different bonuses with BitKong. But, before starting scoring bonuses, it’s important to understand why the game grants Experience Points and Credits. Experience Points are the metric BitKong uses to measure and compare the performance of all the players, while Credits are the unit used to award bonuses.

Their jackpot is the chance to win big at any time. The only requirement is that you have a winning bet. The jackpot can get massive depending on players’ bets. The chances of winning the jackpot are, to be honest, slim (1 in 268 million, or somewhere in that ballpark), but that’s the way it goes when you’re shooting for a top prize.

The game also rewards the best players of the day, week, and month through BitKong’s Leaderboards. Players with the highest amount of Experience Points get to the top of the leaderboard for each period and receive prizes. BitKong also awards cashback according to Ranking: players with a “King” rank get 0.3%, but each lower rank gets a percentage starting from 0.05%.

Recently, the game has incorporated a new reward system: Level Up. Basically, the players get an incentive bonus while they work on their Rank promotion. There are 60 levels distributed in between the ranks; each new level the players reach gets them a specific amount of credit reward.

Last but not least, Magic Chests. These bonuses are also based on Experience Points; the higher amount of XP you win, the better the chest category. There are three categories of Magic Chests: Silver, Gold, and Black. When players win magic chests, they get a random amount of credits out of a range that depends on the Magic Chest category.

Each week, BitKong throws a different Tournament, but once a month, a high-paying tournament splits a prize juicer than usual. To get in, players need to have a minimum of 5,000 experience points. The most significant part of the prize gets divided among the top three players. What is left is split among the rest of the players.

Besides contacting support, you can also share bets with other players and rain money on them by clicking on the icons at the bottom of the chat. The Rain option allows you to shower up to 25 random players with money or choose people specifically.

You can either reach out to BitKong through email at support@bitkong.com or talk to the staff through the live chat available inside the game for registered users.  The email address is used only to notify web malfunction or for complaints. They do respond to emails incredibly fast (even when it’s late at night), so players can rest easy knowing that they will receive a quick reply to their questions.

To keep your information and funds protected, BitKong gives you the option of using 2FA authentication. And that’s not all, the game takes security very seriously, so they also support security keys, which isn’t that common among cryptocurrency casinos.

They give you the option to use Trezor, Leger, and other hardware through BitKong; additionally, you can enable Telegram and Line authenticators for even more peace of mind.

Instead of providing an endless selection of games to choose from, BitKong has opted to keep it simple and flawless. BitKong offers a simple yet innovative cryptocurrency betting game equipped with tons of exciting extras and dynamic graphics. BitKong designs are so strong that you’ll enjoy looking at this game, even if you aren’t winning money. You’ll never have to worry about fairness or security, thanks to all of the extra efforts BitKong has taken.