Ethereum, at the time of writing, seemed to be getting a lot of attention from all corners of the industry. While the successful beacon launch of Ethereum 2.0 has been its most recent highlight, the price of Ether continues to establish itself at a higher range. Now, as far as its price is concerned, its network has been indicative of the said growth as well. 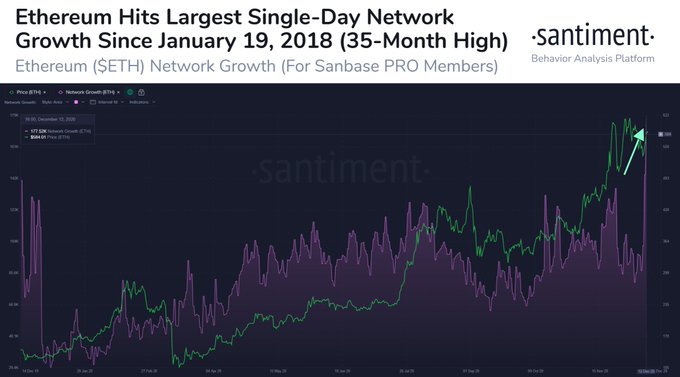 According to Santiment, Ethereum addresses registered their highest single-day spike as over 177k addresses were created in the last 24 hours. It is an extremely positive metric and one not seen since January 2018. However, in light of Ethereum’s price movement, maybe the growth of addresses is not a new development. Ergo, the question – Does the present ‘newer’ situation speak volumes more?

Ethereum network growth correlated with price more than ever?

In order to understand the aforementioned narrative, observe the previous chart once again. Network growth has been common in the past as well, but it has never allowed the price to sustain a higher position. With Ethereum being considered as “Best of the Rest” after Bitcoin, the launch of Ethereum 2.0 may create a completely new identity for the largest altcoin. Wait, hear me out.

In 2020, activity surrounding ETH 2.0 did gather pace but there was always a veil of uncertainty around it. Delays did not help but eventually, the beacon chain was launched and now, the interest has skyrocketed. More than 2% of the ETH in circulation is currently staked on the new network.

The intrinsic value of Ether now lies somewhere else. After the implementation of ETH 2.0, Ether can be termed as a defensive asset. Here’s why,

There is value in a Secured Network

There is no doubt that Bitcoin will continue to carry its torch as the most prized crypto-asset in terms of value. However, with Ethereum’s new model, Ether will be burned rather than remitted to transaction validators, so the deflationary aspect might come into play in ways it hasn’t previously.

The fact that Ethereum will help participants secure transactions and settlements in a more secured way will have a value of its own, and being the world’s most defensive crypto, it will have its perks.

The value in defending an important blockchain network will remain pronounced and that might be Ethereum’s future market.

Hence, we are possibly at a point where network growth and price action might get more correlated for Ethereum. Users are paying attention to all the technical jargon now, and it might not just be about making money anymore.