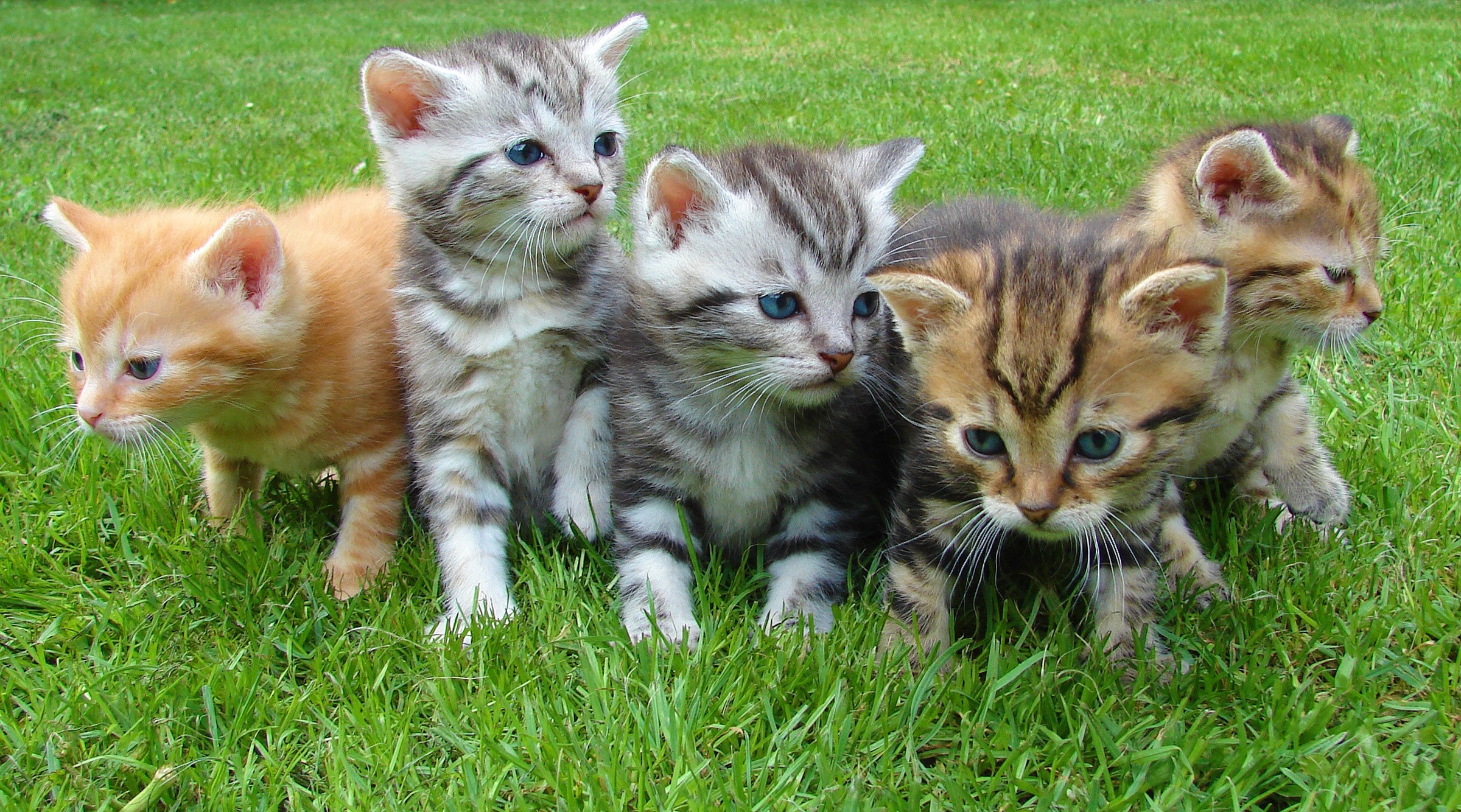 With Bitcoin still trading under the $37,000 mark, most altcoins kept their feet to the ground as well. Since the 24-hour trading volume of the total market dropped by 12% to $105 billion in the last 24 hours, Ethereum, Solana, and VeChain’s movement remained restricted within their respective support and resistance levels. 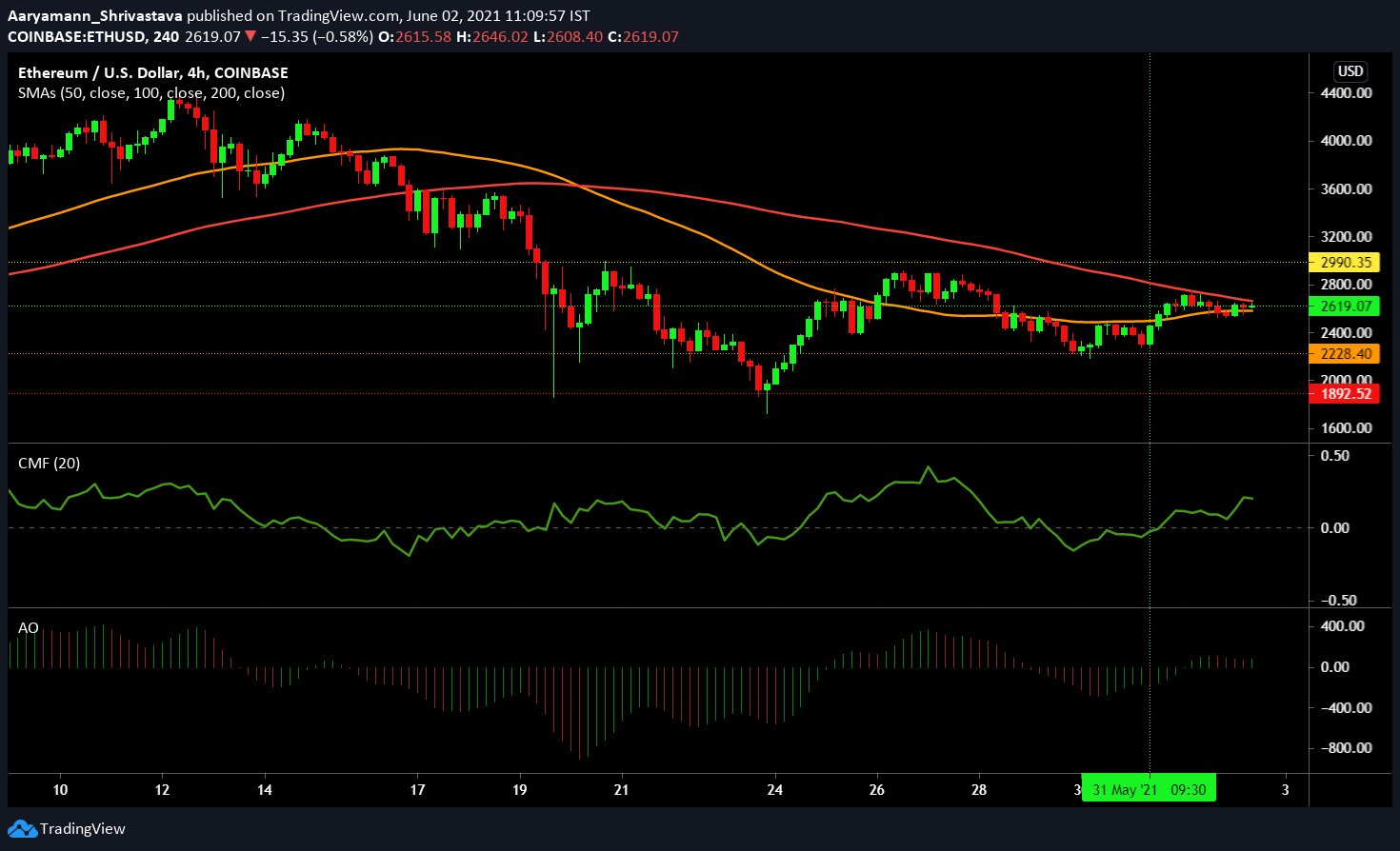 For the last 2 weeks, ETH has kept its movement consolidated within $2990 (resistance) and $2228 (support) levels. Some attempts to breach through the resistance failed and the coin, on May 24, dropped below the support line briefly before coming back up. Such regular corrections have enabled ETH to stay less volatile. Although capital inflows had been fairly strong on the Chaikin Money Flow, post May 24, they were not strong enough to maintain that rally. At the time of writing, the indicator remained close to the neutral line.

Awesome Oscillator made some upward movement to place the indicator above the neutral line. In spite of bearish momentum building up in the last 24 hours, the green bars’ appearance at the time of writing indicated bullish momentum creeping in. Simple Moving Averages lines displayed optimistic movement. At press time, 50 SMA (orange) line shifted its position to move below the candlesticks, while 100 SMA (red) line was moving close to the price indicator. This could indicate an upcoming uptrend.

With ETH trading at $2619, the coin would need a strong uptrend to break past the resistance level. Until then, the altcoin will remain above the aforementioned support level. 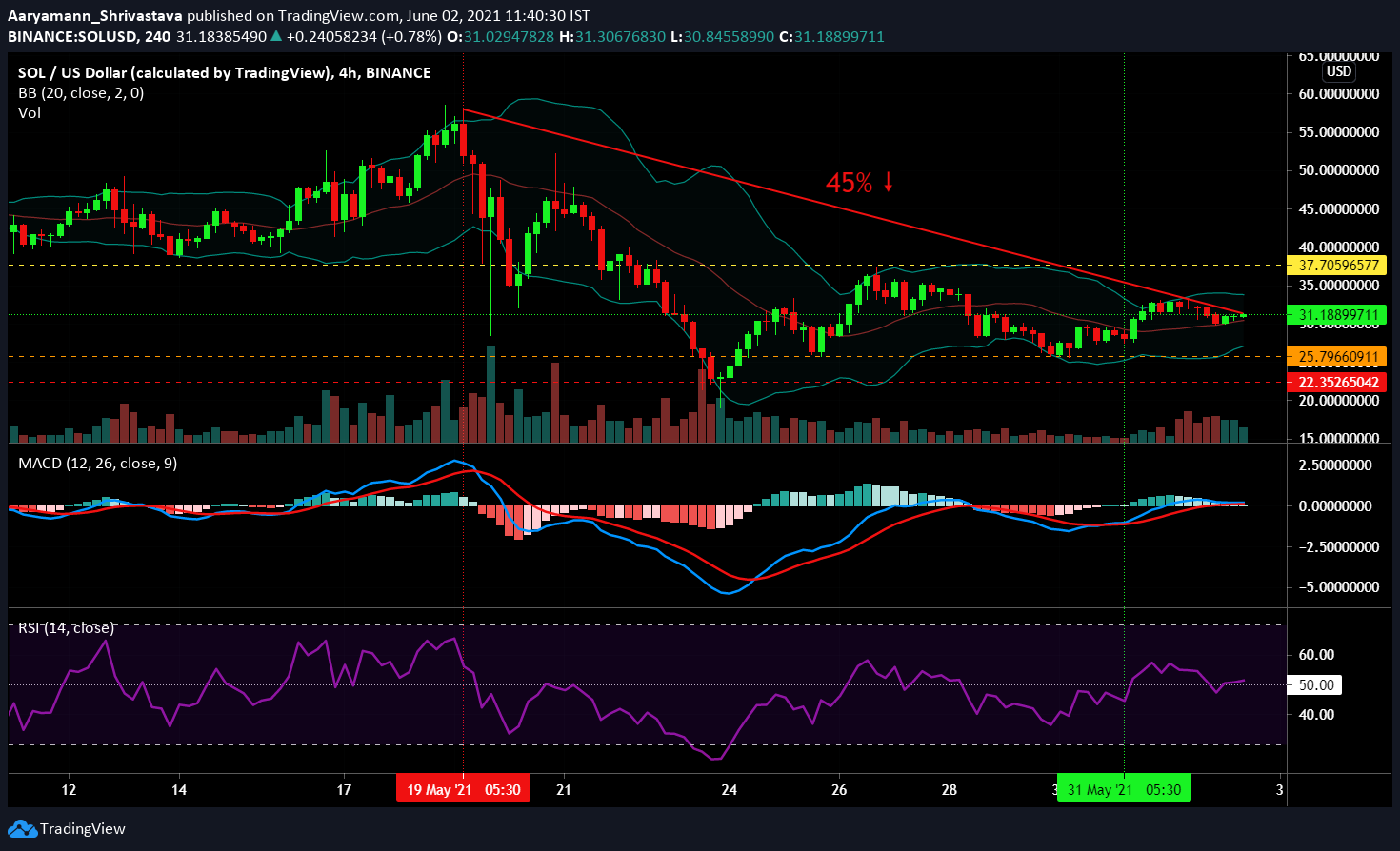 Unlike other coins, SOL has been consistently weak since the May 19 dip. The coin, at press time, trading at $31.18, was down by 45% from $51.70 since the dip. Relative Strength Index mostly remained below the neutral line, suggesting that selling pressure was dominant. However, on May 31 the coin witnessed a trend reversal as RSI stood at 51.2.

MACD displayed a similar movement as the indicator exhibited bearish crossover in the last 2 days. However, at the time of writing, the red signal line inched closer to blue MACD indicator around the neutral zone. Although the Bollinger Bands began converging on May 31, they did not display any significant volatility in the market. Since then the bands have remained parallel, with a tiny hint towards another convergence possible in the near future.

Based on the indicators, no immediate volatility is expected. SOL will likely continue with its sideways movement within its $37.7 resistance and $ 25.7 support levels. 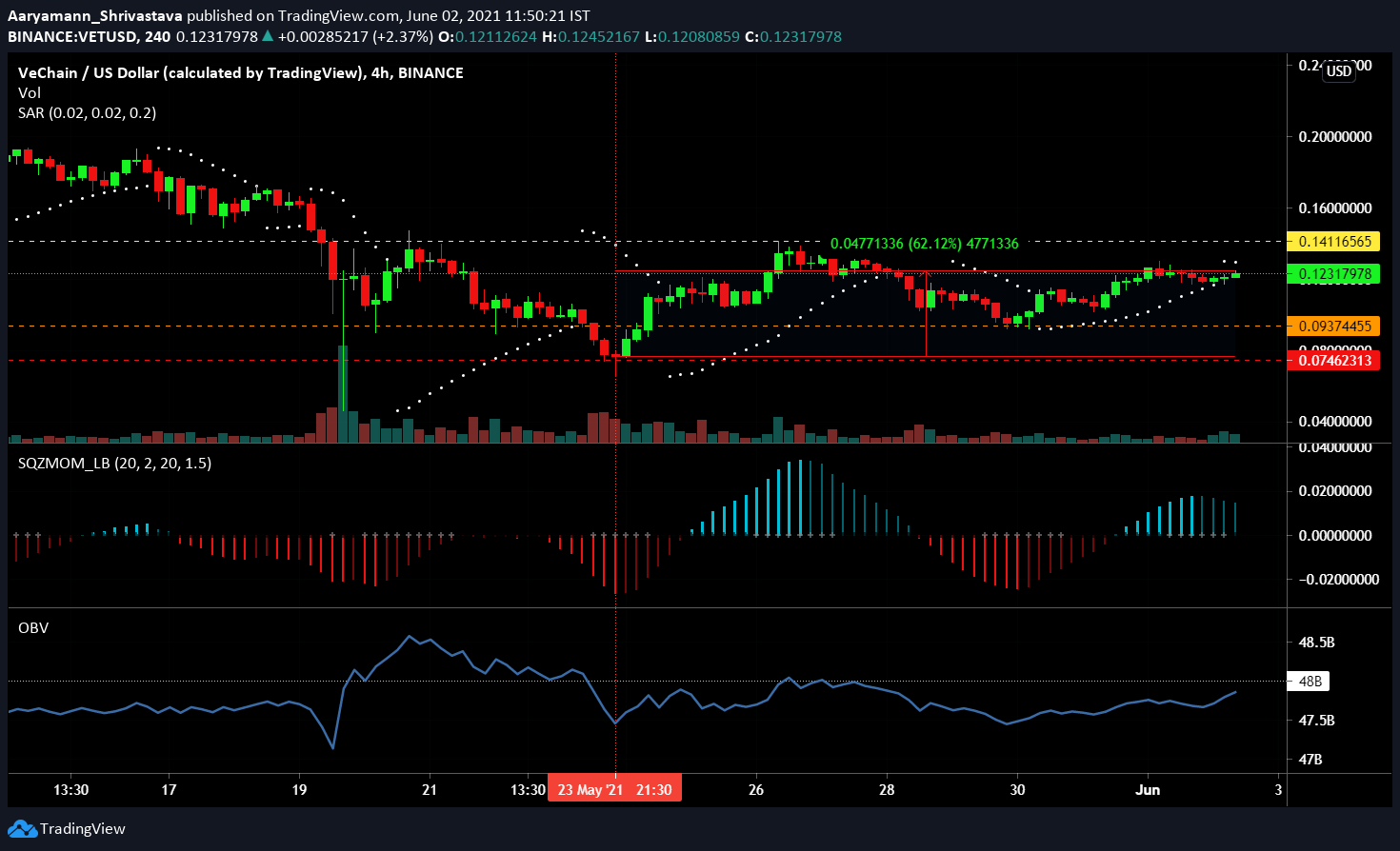 VeChain’s steady sideways movement does not seem to be coming to an end soon. Although the coin did make a huge jump in price in the last 10 days. Trading at $0.123 at press time, VET’s 62.12% jump kept it from falling any further than the bedrock $0.074 level. On Balance Volume indicator displayed consistent selling in the VET market, as the indicator remained under the neutral line since May 23.

According to Squeeze Momentum Indicator, the bullish pressure seemed to be coming down post the ‘squeeze release’ – indicated by white dots – in the last 48 hours. A possible price drop seems imminent based on the indicator’s movement.
This is backed by Parabolic SAR indicator’s shift in positions, as the white dotted lines moved above the candlesticks, a downtrend had been initiated at the time of writing.

While all indicators suggested a further drop in price, based on broader market cues, this drop won’t drive down VET significantly. As long as the coin maintains its movement within the $0.141 resistance and $ 0.093 support levels, VET HODLers need not worry.