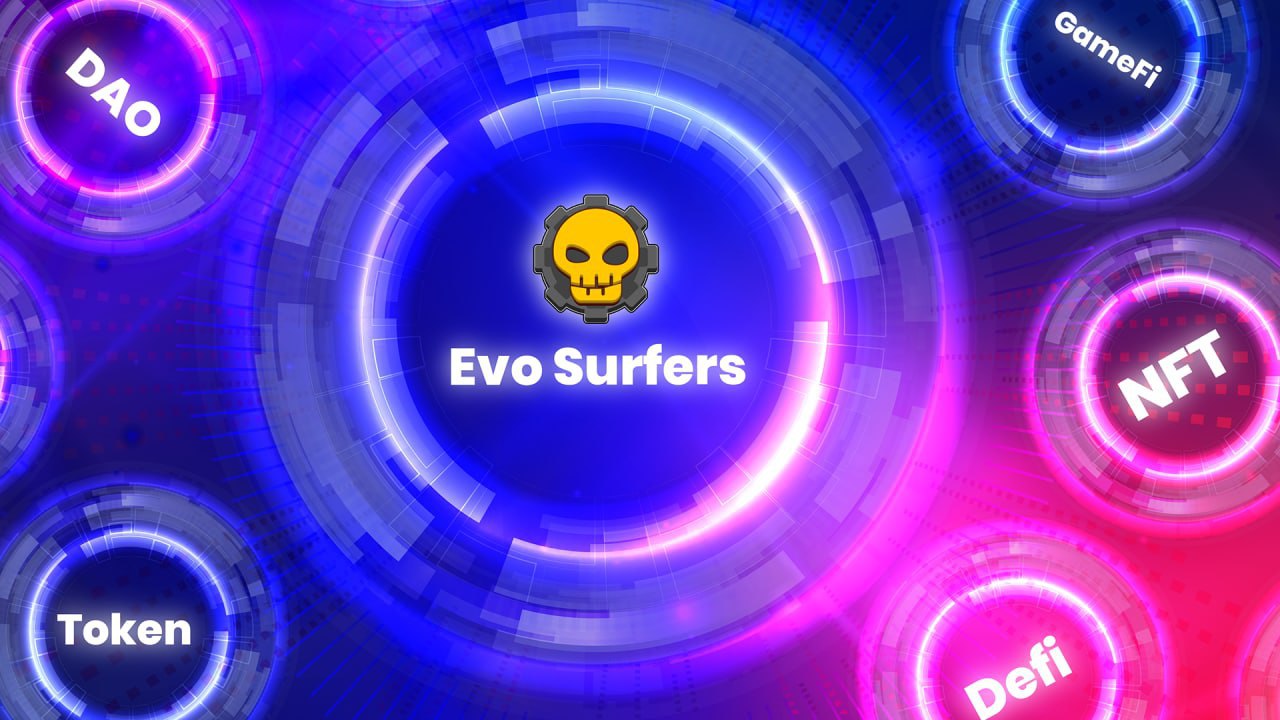 The pandemic has dragged many things into downtrends, but one thing has definitely been given a thrust: blockchain-based games. By implanting NFT (non-fungible token) and crypto into gaming, these games have not only provided virtual fun but also nurtured a new way for users to make money at home: play-to-earn. According to DApp Radar, the game applications on the blockchain have climbed 71% from last year. And the craziest? The top game Axie Infinity has harvested $4 billion from its NFT sales and more than $2 billion from its in-game crypto AXS. These block-chain games with earning and financial possibilities have grown massively into a whole new industry dubbed Gamefi.

It seems like a no-brainer that Gamefi will have a bigger boom in 2022. Facing more fierce competition and more sophisticated users, it’s important to find the key to unlock the further success of Gamefi. Just recently in May, a new blockchain-based game called Evo Surfers garnered huge attention instantly from the community after its release.

Evo Surfers is the very first Gamefi project taking on the giant theme of civilization evolution. It is also deemed as one of the most authentic metaverse games because of its immersive gaming experience including interstellar travel, and the fact that it allows the users to capitalize on the lands in the game to build their own territory with economic rules. But what attracts the players most is the innovative integration of play-to-earn, Gamefi, and Defi which presents a whole cohort of ways for players to make profits and opportunities for the game to develop into an infinite ecosystem.

Players will engage in a variety of missions, and battles and can acquire different in-game assets such as Cachas, tools or equipment called patents and lands. The assets can be traded as NFTs in the inner marketplace or in secondary markets and can be even used to generate additional profit like how it works with copyrights. The initial process of getting NFTs is called egg twisting. As of now, the community is counting the days for the egg twisting to start because it is said that the early egg twisters can get SSR NFTs, i.e. superior NFTs with high quality attributes and hence high values. These NFTs may pay back the investors in 10 days at the fastest.

Besides, the game also has a well-designed dual token model and also incorporated Defi products to give users more earning options. And it will have its own DAO to manage the distribution of the growing profit from the game’s ecosystem as it grows.

As can be seen, not only Evo Surfers deliver an elevated gaming content and design, but it also makes the unprecedented innovative integration of multidimensional profit-earning mechanisms within the game and pushes the boundary of Gamefi. It wouldn’t be reckless to predict that Evo Surfers has a pretty good shot at leading the new Gamefi Race.

Evo Surfers’ overall gaming experience is much more complex and yet well structured. It has abundant elements from cute characters, diverse settings from each stage of civilization, different races with different occupations and abilities, different types of missions and adventures, and multiple ways to recover strength, etc. Players will have diverse fun putting together different combinations and applying various maneuvers and strategies.

The game is also embedded with a well-designed rewarding system. Whenever the civilization is advanced with joint efforts, the game will upgrade and release new lands, tools, adventures, techniques, and rewards to keep incentivizing the players and keep the excitement going.

The biggest rewarding system of Evo Surfers is made up of the play-to-earn mechanism and the blockchain-based rewards such as NFTs, tokens, and additional income generated by them. The three major Evo Surfer NFTs include Cacha NFTs, the avatar of the main cute skeleton characters, and the tools and techniques NFTs which are called Patents in the game as well as the fashion NFTs which can improve the attributes of Cacha.

The ways to get Evo Surfer NFTs are plenty. The most interesting way is the above-mentioned egg twisting from which users can get Superior Cachas, patent NFTs including genesis patent which guarantees a fixed income, and fashion NFTs. But users wouldn’t know what exactly they are getting with the eggs which provide a kind of excitement similar to blind boxes.

One of the biggest innovations of Evo Surfers NFTs is that among all types of NFTS, the patent NFT owners can not only profit from selling the patents, but also from collecting copyright-like income. That is to say, every time someone else consumed crypto for the patent, part of the expense will go into the account of the original owner as dividends until the patent is sold to the new owner.

After getting to a certain level of the game, users can also acquire the land and capitalize on the land by renting it or charging certain fees for the usage of the land, making it a small Metaverse real estate business.

If trading NFTs and enjoying the patent commission isn’t enough, Evo Surfers will also issue its not one but two platform tokens which are EVO and EVOG to form a dual token economy within the game.

Evo will be the main carrier of the game value and will be traded on DEX and major exchanges. It is the in-game currency to purchase eggs, Cachas, patents and trade NFTs. It is also the holding proof to get dividends from the game. All kinds of decentralized financial activities will be carried out with EVO.

EVOG on the other hand will be mainly used as a utility token in the game. Players will consume EVOG for breeding Cacha or Cacha synthesis and other in-game needs. However, the value of EVOG can be bridged with EVO by creating and trading NFTs. Users can consume EVOG to hatch or synthesize higher-level Cachas and sell them to obtain EVO.

The dual token model may be more complicated, but it is vital for the appreciation of the value of EVOG. Using Evog to meet the frequent in-game demand can free the Evo holders from the concern of excessive inflation to hurt the value of Evo.

Perhaps the most innovative integration Evo Surfers has made is combing Gamefi and Defi. If a user somehow doesn’t want to play or trade, he or she can take advantage of the Defi innovation, lay back, and still enjoy the growing profit of the gram.

Evo Surfers offers a bunch of Defi options including liquidity mining, Evo bond and staking, among which staking presents the most diverse way to get benefit in a financial manner. User can use their Evo tokens as collateral, i.e. to do staking, to get dividends of different percentages depending on how much they stake and whether or not they burn their EVO. Last but not the least, users can also stake their EVO tokens in the Evo Surfer DAO to become shareholders of the entire game and get dividends from the revenue of the whole platform. Evo Surfers puts 50% of the earnings into the DAO every week as dividends to the DAO investors.

As can be seen from the above, Evo Surfers has incorporated the copyright-like passive income model of patent NFTs, the metaverse land business, the dual tokenomics, and Defi into one single game. This mufti-dimensional integration itself is the biggest innovation of Evo Surfers and is also probably the key to becoming the next hit in the Gamefi space.

Solana: Decoding the aftermath of the recent losses on SOL’s technicals

Bitcoin- Buy the dip or not? Your guide to the bear market