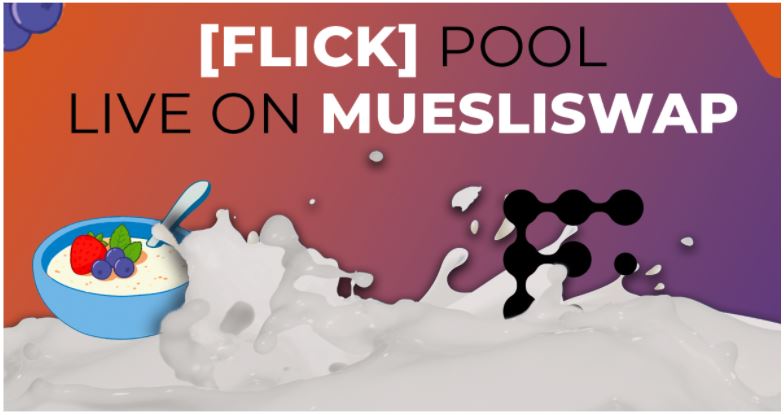 The birth of Flickto arrived in November 2021. Their inception saw the introduction of a project that would help to tackle the disparities that are prevalent in mainstream media. Flickto is a one-of-a-kind platform that aims to bring equality and diversity to the forefront of society, with the introduction of what they have coined as decentralized media (DeMe).

On the other hand, MuesliSwap is the leading DEX on the Cardano network. This puts them in good stead for leading the charge of a decentralized future. The MuesliSwap DEX allows their community to exchange tokens in a decentralized manner and without the need for a third party. They use their native $MILK token as a governance token, which allows their users to participate in their stake pools and have a say in community proposals.

Flickto and MuesliSwap made their partnership official last week. Partnerships like these are essential in order to push the overall adoption of blockchain in the right direction. MuesliSwap was the first DEX to launch on the Cardano network and Flickto the first Decentralised Media incubator, this has the ability to become a powerful partnership, not just on the Cardano network but throughout the cryptocurrency industry.

Muesliswap is launching a pool on their exchange that will allow users to stake their native token $MILK and be able to receive rewards in the form of $FLICK tokens. With decentralization, the underlying aim for Cardano, a partnership like this helps to solidify the chances of this coming to fruition. Even though Flickto and MuesliSwap are encompassing two different industries, both are determined to bring decentralization to their respective fields.

The formation of this partnership puts both parties in good stead with their future endeavors. With Flickto leading the charge for decentralized media and MuesliSwap doing the same with governance this partnership is one that will potentially go down in the history books. As both their communities continue to thrive and grow there are big things expected of both of them, and it is clear for all to see that they don’t intend to stop pushing forwards any time soon.

With Flickto’s ISPO Remastered now live those staking with [FLICK] now have the opportunity to be rewarded in a very tasteful manner. Their ISPO saw them increase their token distribution rewards from 0.15 $FLICK to 0.33 $FLICK. This means that for every ADA, a delegator stakes these are the rewards they will receive. In addition to this Flickto has been releasing NFTs with real-world utility that will allow those who hold them access to production and studio discounts, as well as creative and business consultancy.

These two projects are ones that investors need to be keeping a close eye on in the future. The road to decentralization is a long one but both projects are determined to make it a realization.