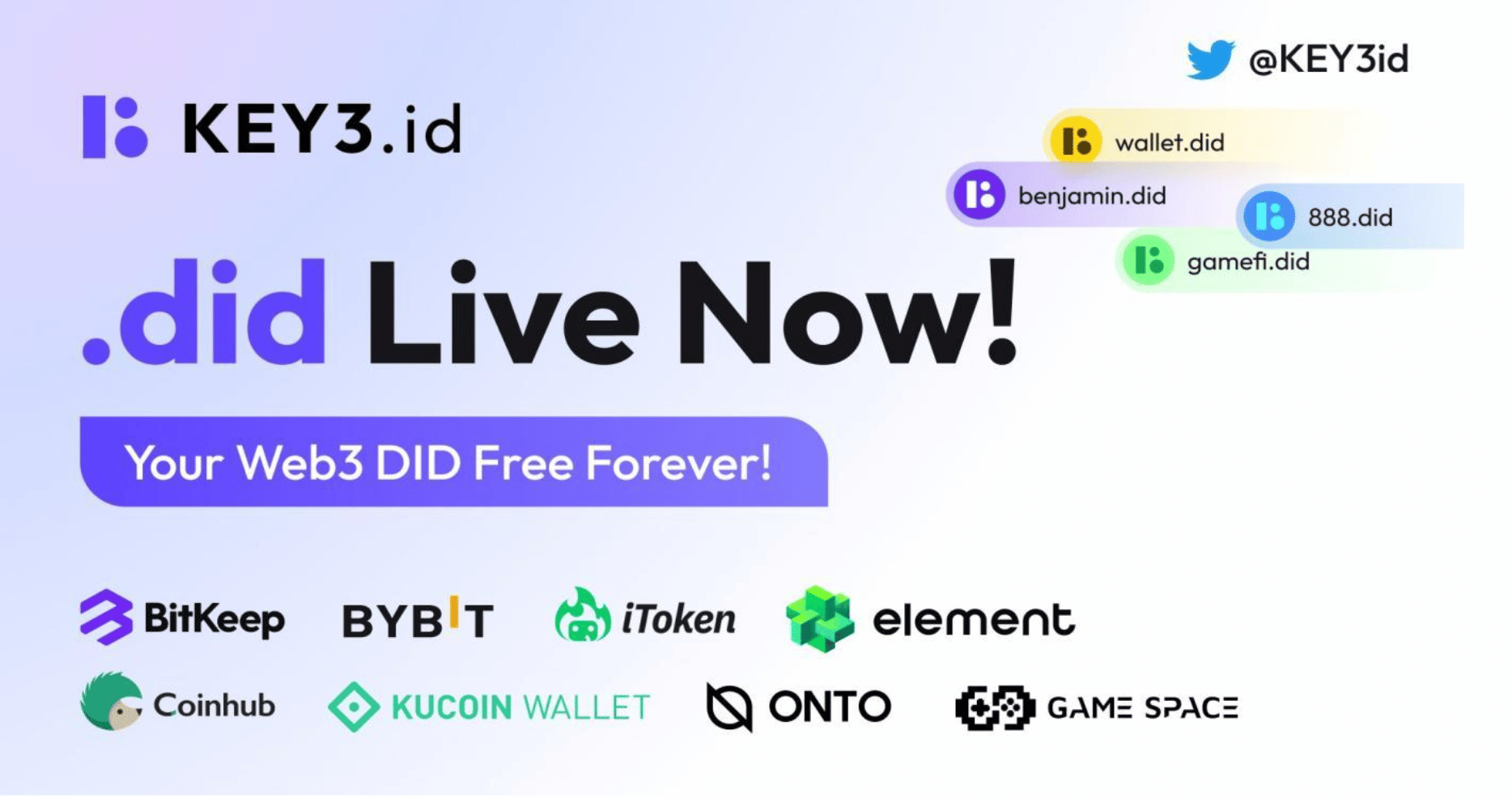 The DID protocol KEY3.id is live on November 10th at 20:00 (UTC+8). KEY3.id strategically launch the .did domain name and initiated an early bird campaign for all ENS holders to claim the same domain name they already own for free. Earlier on November 7th, GameFi Future Fund, a subsidiary of Game Space, announced a $3 Million investment in KEY3.id.

Within 48 hours only, KEY3.id gained over 16,000 Discord users, over 22,000 Twitter followers and over 16,000 users participating in the Early Bird campaign. KEY3.id has partnered with BitKeep Wallet, iToken Wallet, Bybit, KuCoin Wallet, Coinhub Wallet, Onto Wallet, Element.market, and many other wallets, DeFi, exchanges, DAO organizations and others to build a network of applications for the .did domain.

Kory Pak, CEO of KEY3.id said: “The choice of a neutral term .did was made with the intention of being inclusive to express that Web3 is a big unified world and should not be divided and factionalized at the entry level. On a broader perspective, it should also not contradict with the core philosophy of Web3, but instead encourage each other and take part in the development of the ecosystem, building the Web3 industry together.”

KEY3.id possess distinctive features compared to existing live domains or DID projects that include:

KEY3.id is a Free to Claim, perpetual ownership requires no renewal fee and an inclusive DID protocol dedicated to providing free, available and decentralized identities for every user who wants to enter Web3. KEY3.id ushers in a new phase of Free to own DID, empowering users with a free DID experience at a low threshold, and breaking the circle to attract new users to join Web3.

KEY3.id has chosen .did as the main domain name due to its profound meaning. Most of the current mainstream domain names have public chains as their factions, such as .eth, .bnb, .sol, etc., which are incompatible with each other and form fragmented user groups. Among the many domains with distinct factional characteristics, .did appears more neutral and inclusive. Noun-as-category is a smart choice.

KEY3.id also supports cross chain, a DID can be bound to multiple chain addresses to achieve multi-chain parsing. For example, for users who often transfer money across exchanges and wallets, they often have both an ETH and TRON wallet. KEY3.id can bind multiple chain addresses and resolve them intelligently by chain, thus facilitating users with much more convenience. KEY3.id chose to deploy the first phase of .did on ETH due to the fact that it has the largest user base. In the near future , the deployments and applications will also be supported on multiple chains.

KEY3.id has opted for a more equitable distribution scheme for issuing premium domain names, as well as a more decentralized DAO vault. In response to the current situation that the demand for digital domain names in the DID scenario remains speculative, KEY3 has reserved short digital domain names with less than 4 digits and will subsequently distribute quality short domain names to users who contribute to community, building through airdrops and auctions in a fair manner of which the proceeds from the auctions will be used to support project development.

In terms of partners, KEY3.id also has resources of leading partners in the industry, and has quickly gained the support of many wallets including BitKeep Wallet, iToken Wallet, Bybit, KuCoin Wallet, Coinhub Wallet, Onto Wallet, Element.market and many other wallets, DeFi, exchanges, DAO organizations and others before it goes online.

With the support of many partners, KEY3.id now can provide free, fully autonomous and controllable DIDs to a broad audience of Web3 users without renewal fees, maximizing the digital identity that can be created and used by anyone who needs it, and may become a new force in the DID sector.

KEY3.id is a Decentralized Account System that is free to claim and permanently free to own without any fees for renewal. KEY3.id lowers the entry barrier and uses a neutral term.did with the intention of being inclusive of the major ecosystems and not taking sides to encourage more existing and new users to enter Web3. Users can create any sub.did and assign ownership to anyone you’d like, even set up your own registrar for your .did.