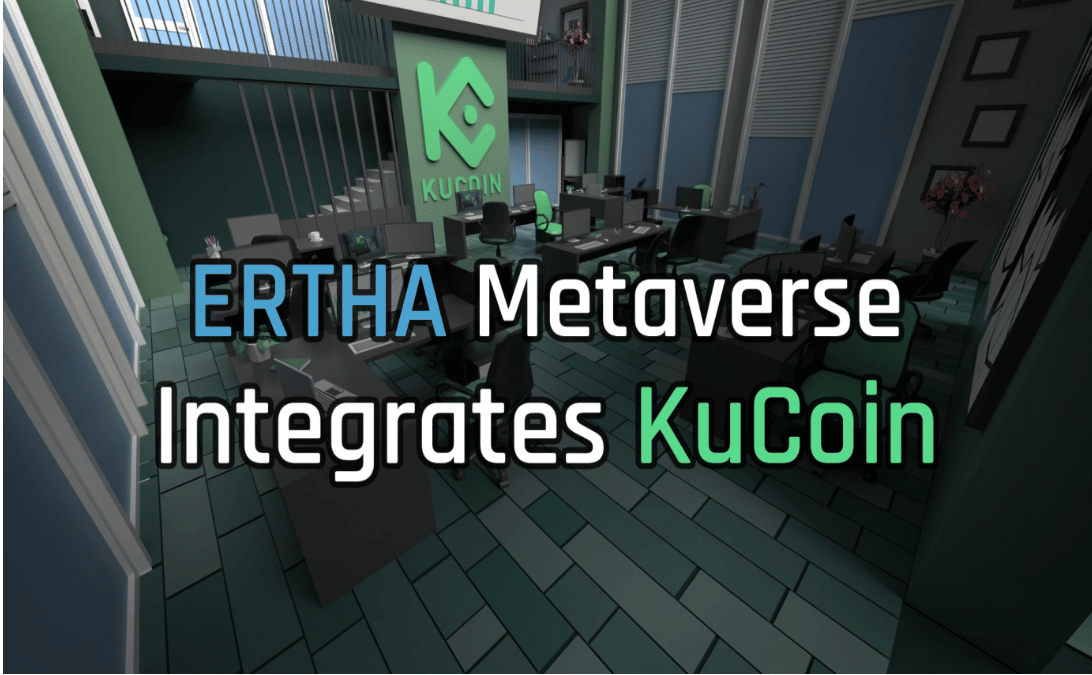 KuCoin, one of crypto’s largest exchanges has announced its arrival in the metaverse. Renowned for their pursuit of high-quality blockchain projects, they have partnered with Ertha, a metaverse with mass-market appeal.

From today, players who log in to Ertha’s Early Beta will be greeted by a state-of-the-art and fully functional KuCoin Office. Stop by to browse live market charts and begin trading within seconds!

The KuCoin Office is located in the first playable ERTHA NFT Land plot. ERTHA’s Play-And-Earn mechanics present NFT owners with a real opportunity to earn income from their land. With more than 24,000 land plots already purchased by investors, KuCoin couldn’t miss the opportunity to get on board. Take advantage of an exclusive offer to get revenue-generating ERTHA NFT Land for 30% OFF for a limited time only!

Ertha continues to position itself at the forefront of innovation within GameFi. Few projects have successfully integrated notable brands into their ecosystems and KuCoin’s backing speaks volumes for Ertha’s long-term potential and trust within the market.

Open to all, Ertha’s Beta has given players a closer look at its gameplay and role-playing systems. In addition to exploring a large metropolitan area, the recently revealed Play-and-Learn mechanics have opened up a host of exciting options for players wanting to create a metaverse-ready identity. There is an exciting road ahead for Ertha!

In Ertha, mankind finds itself on the brink of extinction. World leaders failed with their last-ditch attempts at saving Earth, and in the years that followed untold natural disasters devastated the planet.

Players are given the opportunity to right the wrongs of our past by building a new world, from the ground up. Extract resources, develop land, rebuild economies, and reform governments in the way they see fit. Each player’s actions can have lasting impacts within an ever-evolving metaverse.

Ertha’s world is a complex and intricately designed playspace ripe for the creation of new governments, economies, and shaky alliances between its player bases. The Metaverse is divided into NFT land plots, each of which collects taxes, fees, and other forms of revenue from the transactions taking place on them. Players must balance production, trade, and financial budgets, to stay one step ahead of the competition.

For those looking for an introduction to metaverses with the possibility to play and earn, Ertha represents an opportunity like no other.

How to Play and Earn in Ertha?

Player ownership is connected to unique NFTs called HEXs. Each HEX grants its owner complete control over their land within the metaverse.

Ertha has been designed to replicate a real-life environment with a player-driven economy. A Player’s actions, whether political or environmental, in times of conflict or peace, can create real change and have far-reaching consequences.

Wealthy investors have already made Ertha their metaverse of choice. The game recently announced a series of high-value sales, including Rome for $120,000 and Tokyo for $59,000.

Landowners have a say in everything, from international trade laws to taxes on the transactions being conducted in their territory. Just like in the real world, each HEX owner can profit from their real estate investment.

Launched in September 2017, KuCoin is a global cryptocurrency exchange with its operational headquarters in Seychelles. As a user-oriented platform with a focus on inclusiveness and community action reach, it offers over 700 digital assets and currently provides spot trading, margin trading, P2P fiat trading, futures trading, staking, and lending to its 18 million users in 207 countries and regions.

In 2022, KuCoin raised over $150 million in investments through a pre-Series B round, bringing total investments to $170 million with Round A combined, at a total valuation of $10 billion. KuCoin is currently one of the top 5 crypto exchanges according to CoinMarketCap. Forbes also named KuCoin one of the Best Crypto Exchanges in 2021. In 2022, The Ascent named KuCoin the Best Crypto App for enthusiasts.

Optimism clan can leverage this upgrade to maximize profit