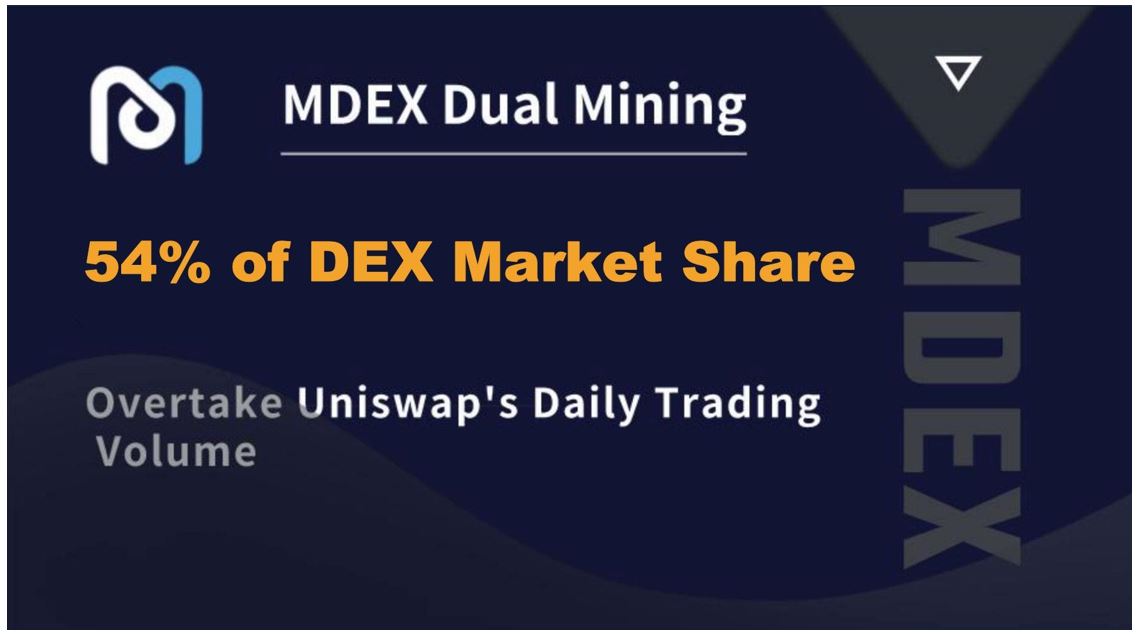 Fast-growing Heco-based MDEX recently announced record-breaking daily transaction volume of USD 5.05 billion. Implementing a unique ‘dual-chain dual-mining’ mechanism on the platform, MDEX burst on the DEX scene just slightly over a month ago on Jan 19 and has not looked back since.

The young and ambitious DEX has its sights set on dethroning Uniswap and has surpassed the DEX king a number of times in daily trading volumes, the most spectacular being its USD 5.05 billion volume on February 24. Currently, in terms of the DEX market share, MDEX is ranked number one on CoinMarketCap, capturing 54.49% of the market at the time of writing.

2020 saw the DeFi market begin its exponential surge with a temporary slowdown in November. From December to the beginning of 2021, the pace picked up again with a vengeance and a number of the top DEXes have begun to boast daily trading volumes exceeding USD 1 billion.

Amid concerns about Ethereum’s high gas fees on Uniswap, however, many DeFi users are beginning to look at alternatives in the DEX space.

Based on the Huobi Ecological Chain, MDEX leverages the Heco public chain to deliver low transaction fees and fast delivery times. Presently, MDEX.COM transaction fees only cost about 0.1 cents per swap, which means that 1 USDT equivalent of HT can support nearly 1,000 swaps.

Implementing both liquidity pool and transaction mining (dual mining), trading on MDEX can generally achieve zero and even negative transaction fees. This is because, excluding slippage losses, the MDX rewards generated by the MDEX platform users for trading and mining are much higher than the transaction fees required for the transactions.

In addition to the zero or even negative transaction fees, MDEX also boasts fast delivery times. With transaction speeds of 500 TPS on the Heco public chain, transactions on MDEX take only about 3 seconds.

With a user interface designed for excellent experiences for both projects and users, zero-fee and fast transactions combined with low slippage, good depth, and high APY for transaction and liquidity mining, MDEX has been attracting an increasing number of popular DeFi projects on its platform.

Popular projects such as BAGS (Basis Gold Share) originated on the MDEX platform. The first algorithmic stablecoin protocol on Heco, after landing on Huobi Global, BAGS’ initial price jumped from USD 20 to reach as high as USD 1,022, an increase of 51 times.