The Tron network harnesses blockchain technology to create a platform for Decentralized apps (dApps). Since its establishment in 2017, the network saw solid growth over the last few years in committing itself toward the decentralization of the internet.

Tron offers public blockchain support of high throughput, scalability, and availability for all dApps within its ecosystem. The July 2018 acquisition of BitTorrent further reaffirmed and expedited the network's decentralization efforts.

At its core, Tron aims to host a decentralized entertainment system for the cost-effective sharing of digital content. It seeks to deploy the features of the blockchain and peer-to-peer (P2P) network technology. In doing so, Tron eliminates the middleman by allowing content creators to sell their work directly to consumers.

The network utilizes the 'Delegated Proof-of-Stake’ (DPoS) as its consensus mechanism.

A DPoS-based blockchain uses a voting system where stakeholders outsource their work to a third party. In other words, they can vote for a few delegates that will secure the network on their behalf. Most importantly, DPoS blockchains generally tend to have higher transaction processing speeds per second than the PoS ones.

Tronix or TRX is the currency used to transact on Tron's blockchain. Users of the network can use TRX to pay the content creators for access to their applications.

Transaction fees on its network are calculated based on energy, bandwidth, and transaction type. A typical transaction has negligible costs compared to other networks. All in all, they exist but in a nominal way.

Immediately after its October 2017 launch, TRX rallied toward its ATH in the next two months. Then, TRX failed to initiate momentum until March 2020. However, since the covid era, the altcoin marked a consistent rally as it kept flipping its resistance levels to support over the last two years. Nonetheless, owing to an over 50% correlation with Bitcoin on average, TRX declined alongside most cryptos in the market.

This decline induced a retest of its 19-month support in the $0.05 zone. Keeping in mind the press time macroeconomic conditions, the sellers could aim to constrict the buying rallies in the short-medium term.

However, TRX's readings on the front of tokenomics have reignited bullish recovery hopes in the recent past. Let's dive deeper into some other developments to gauge its potential to lift off in the coming times.

In the coming times, Tron could see an increase in the number of its burned tokens with the issuance of the USDD stablecoin. The USDD (Tron's stablecoin) increases the burning rate concerning its swap mechanism.

This mechanism puts TRX on track to becoming more deflationary in the coming times. 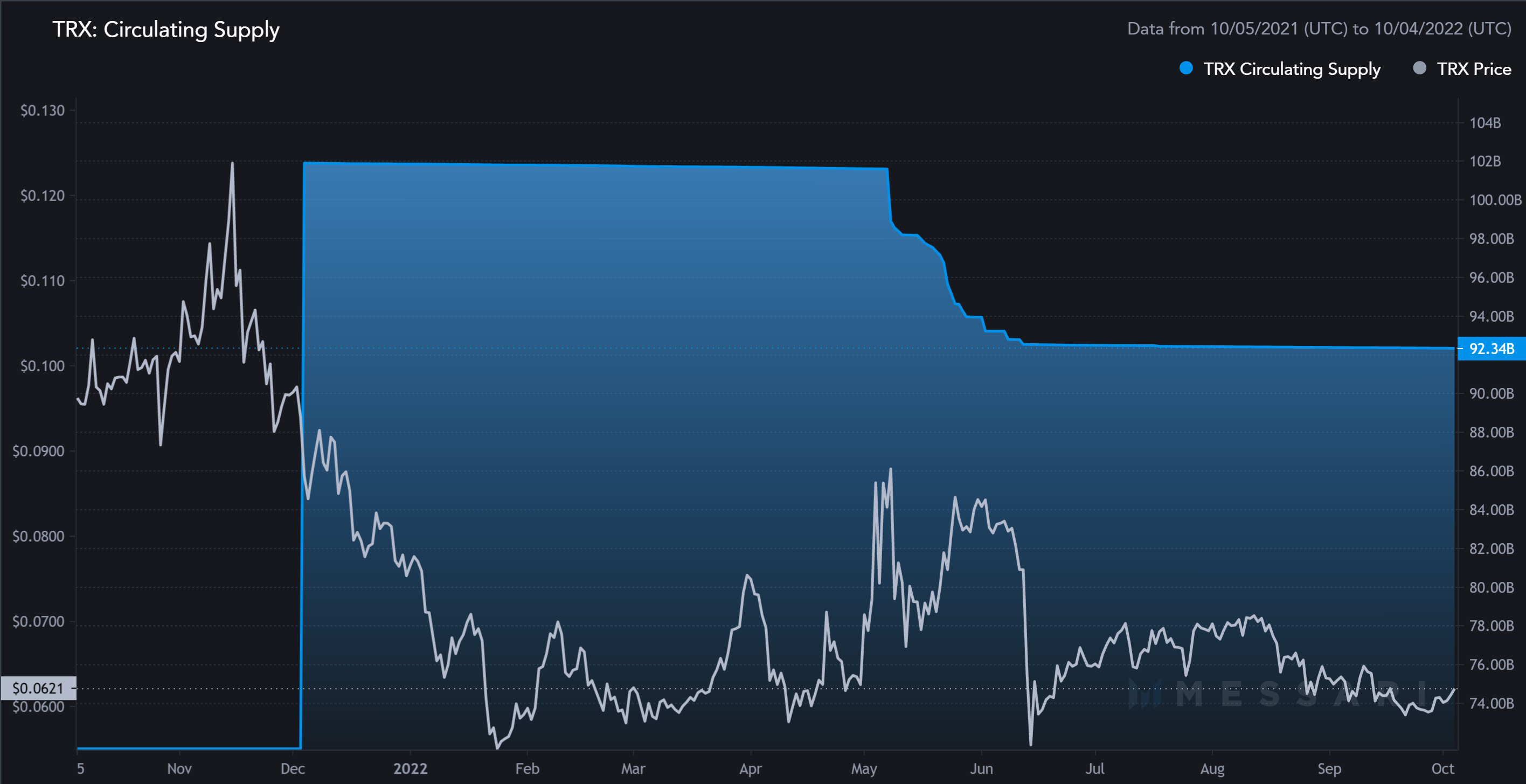 The aforementioned readings illustrate the fall in TRX's circulating supply since the launch of USDD in May 2022. Due to this mechanism, TRX's value could register an uptick in the near-medium term.

However, following the meltdown of the UST stablecoin, many people have questioned the reliability of this mechanism from a long-term perspective.

With the recent announcement of its Peg Stability Module (PSM), users can swap USDD and USDT at a 1:1 ratio and provide a more stable price with no sudden slippages or hidden fees.

Furthermore, according to DefiLlama, the press time total value locked (TVL) across Tron's ten different protocols stood at $5.71 billion as it overtook Binance Smart Chain to become the second-largest blockchain in terms of TVL.

Since May 2022, Tron has seen solid growth on the front of its development activity.

The price and the social dominance were understandably quite sensitive to each other, especially since August 2022. Interestingly, the social dominance metric did not mark an uptick after the recent hike in prices. This reading entailed a slight bearish preference considering both of these metrics' correlations.

Nonetheless, the increased development activity could set the foundation for more dApps and better processing. In fact, from a yearly perspective, Tron has been consistently marking an uptrend in its active addresses.

TRX registered a solid growth on its charts during 2020-21. The buyers induced a rally above the 20 EMA (red), 50 EMA (cyan), and 200 EMA (green). In doing so, they flipped these moving averages to support. As a result, the coin touched its three-year high in mid-April 2021.

The broader market fallout pulled TRX by over 65% from its multi-year highs as it fell toward the $0.057 support level. The token curtailed its volatility near the 20/50 EMA as it plateaued from its immediate support level.

Also, the bearish rally entailed an 18-month trendline resistance (white, dashed) on the weekly chart. The token was yet to prove its bullish edge as it strived to break above this resistance.

An eventual break above this trendline resistance could open doorways for near-term growth. In this case, TRX could attain the highs of $0.082-$0.09 in the coming times.

The Relative Strength Index (RSI) displayed a slight selling edge after consistently hovering in the bearish region since June 2022. A plausible break above the equilibrium would hint at a recovery in the coming times.

Should you consider buying TRX?

With a new burning mechanism in place, TRX could continue to flash deflationary tendencies in the coming times. Also, its DeFI and development activity seemed to be on the positive side. Consequently, the alt's price could play out in the favor of bulls from a long-term perspective.

From a near-term perspective, the altcoin still needs to find renewed buying pressure to jump above the constraints of its descending 20/50 EMA. The buyers could look for the entry triggers and targets as discussed above.

Further, according to our analysis in the long term, TRON price prediction for June 2023 shows the average price of TRX at $0.13 and the highest possible price for June 2023 would be $0.14.

TRON’s long term Price Prediction below is a look at TRX’s future prospect with regards to price. TRON was last seen at $0.054, with a market cap of $4,981,230,527 and trading volumes of $174,372,772. TRX’s price prediction is possible by analyzing historical price action, current developments and social sentiment from the community.

Is TRX a good investment?

Investing in TRON, TRX will purely depend on your personal risk appetite. As you can see over the past 24 hours TRON’s price has witnessed a -0.85% decrease and over the past 30 days TRON has decreased by -12.24%. So it all depends on if this investment will hit your trading goals.

According to our latest TRON Price prediction for 2022, TRX should vary between $0.072 and $0.048 Please keep in mind that the crypto market is very volatile and this TRON price prediction does not account for extreme wild swings in price.

What was the highest price of TRON?

The highest price for TRON was recorded in 5th January 2018 during which TRX hit an All Time High of $0.23

What is the price of 1 TRON?

The price of 1 TRON according to current market rate is $0.054