Bitcoin’s price has rebounded from the correction that followed the new ATH and the asset is now trading close to $48000, well on track for price discovery beyond the ATH. As the price continues rallying, a total of $602 Million worth of Bitcoin short positions got liquidated in the aftermath of the Tesla news. If this is combined with the shorts that got liquidated in the aftermath of Elon Musk’s Bitcoin tweet, then a total of $1.2 Billion shorts have been liquidated on events that can be attributed to Musk. This short squeeze has had an impact on the sentiment and in turn on the trade volume on spot and derivatives exchanges and has resulted in a drop in the funding rate. 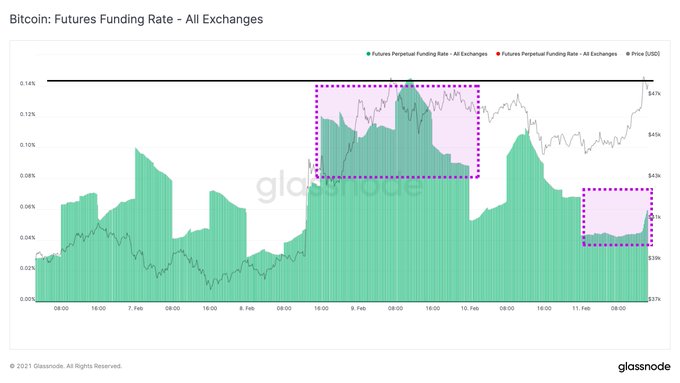 Based on the following chart, the higher the funding rate, the hotter the market. However, the more saturated the market is the lesser room for vertical growth in price. The chart suggests that post the short squeeze on Bitcoin’s long and short positions, the funding rate is now well below what it was when the price hit $48000, and if nothing else, this leaves room for vertical growth in Bitcoin’s price.

In contrast to this, the options market continues to remain uninspired and uneventful with 36 contracts changing hands on CME Bitcoin options. Besides, the Bitcoin to Fiat trading volumes and demand is up in Asia and there is an 18.7 percent increase in Bitcoin trading into USDT in January. Bitcoin trading in USD increased by 63.2 percent and hit 2.7 Million Bitcoin. Trading in other Asian fiat currencies like Japanese Yen and Korean Won increased by 20.5 percent and 26 percent respectively.

These metrics combine to hint at an increase in Bitcoin’s price in the long-term in keeping with the goal of hitting $100000 by the end of 2021. The above chart signals a rise in demand from new traders on spot exchanges and in both USDT and USD markets. The short squeeze may have had a negative impact and may have led to liquidations, however, it has had an opposite impact on demand for Bitcoin. The short squeeze signals that Bitcoin’s price rally may be an extended one.

Related Topics:Bitcoin 2.0bitcoin athfeatured
Up Next

Cardano has over 100 commercial projects in the pipeline, says Hoskinson