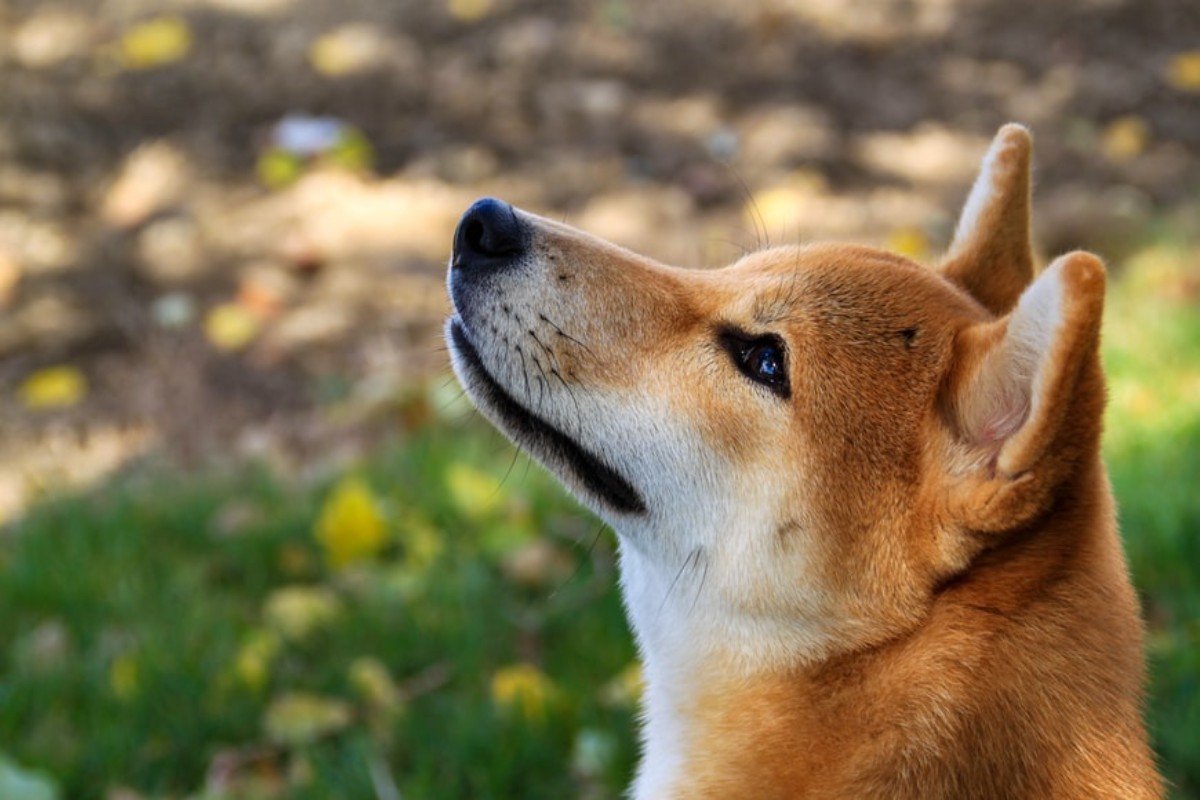 Shiba Inu has been in the headlines for the entirety of October owing to its meteoric rise. Curiously though, the altcoin has placed itself on the list of the biggest losers of the month. Yet, more than the coin it is always about the investors. Perhaps, it’s time for them to take stock of their investment in SHIB .

While 26 November was a bad day for all altcoins, SHIB’s situation wasn’t just confined to yesterday. After being kicked out of the top 10, the meme coin has been registering dips regularly throughout November. Consequently, throwing its investors into losses.

Though yesterday was the biggest dip of November for the entire crypto market, it wasn’t the case for SHIB as it has had a way a bigger drop of 20% on 3 November.

Since then the price has just been cascading and investors have been consistently losing their profits. As of press time, SHIB  lost out on 50% of all the growth observed during its October rally. 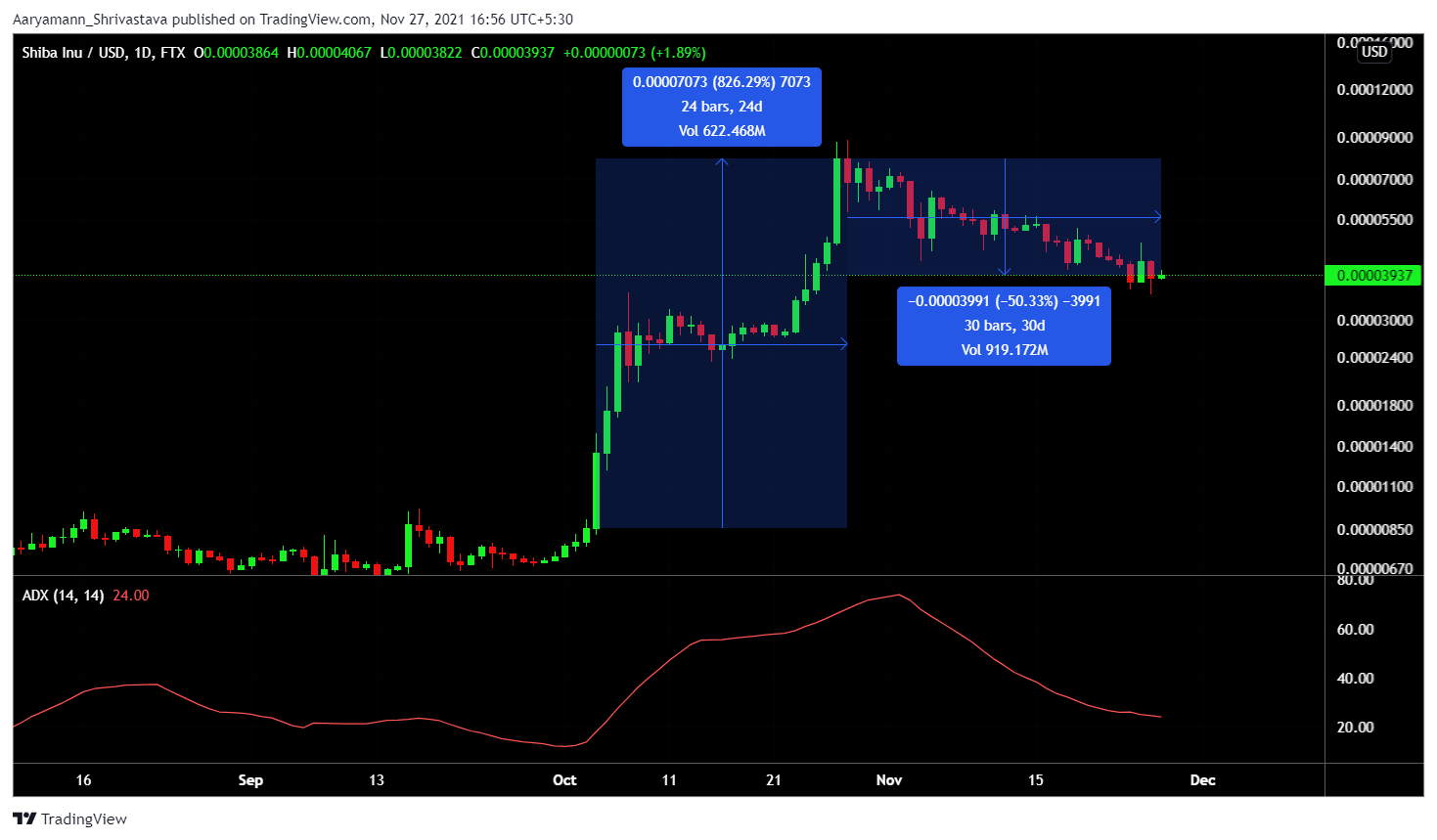 About 100k investors who brought about the all-time high price of $0.00003135 are turning out to be the biggest sufferers at the moment. But they aren’t alone as over 39% of all SHIB investors are currently at loss. 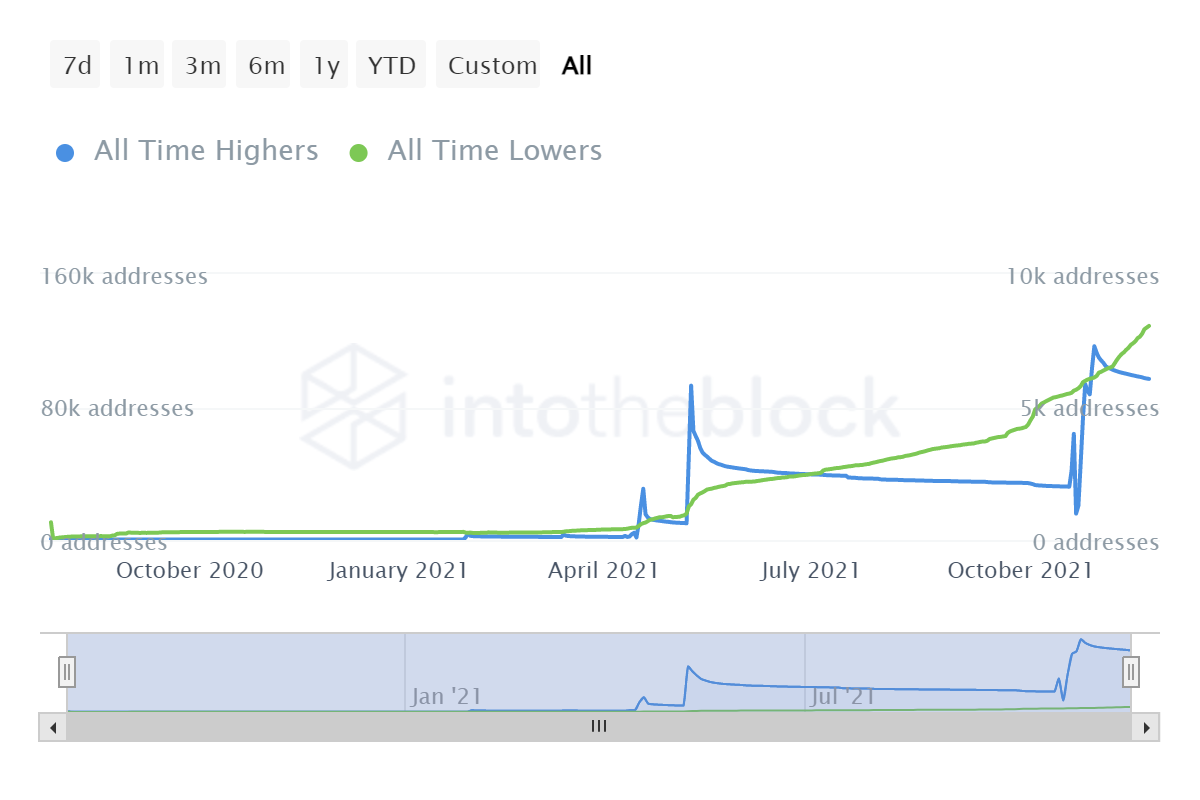 However, with the bearish trend coming down for SHIB (ref. Shiba Inu price action image – ADX under 25) it looks like investors are preparing for a rise.

At the time of this report, the amount of SHIB being sold is equal to what is being bought back. Well, it possible that this could be the whales acquiring more SHIB. 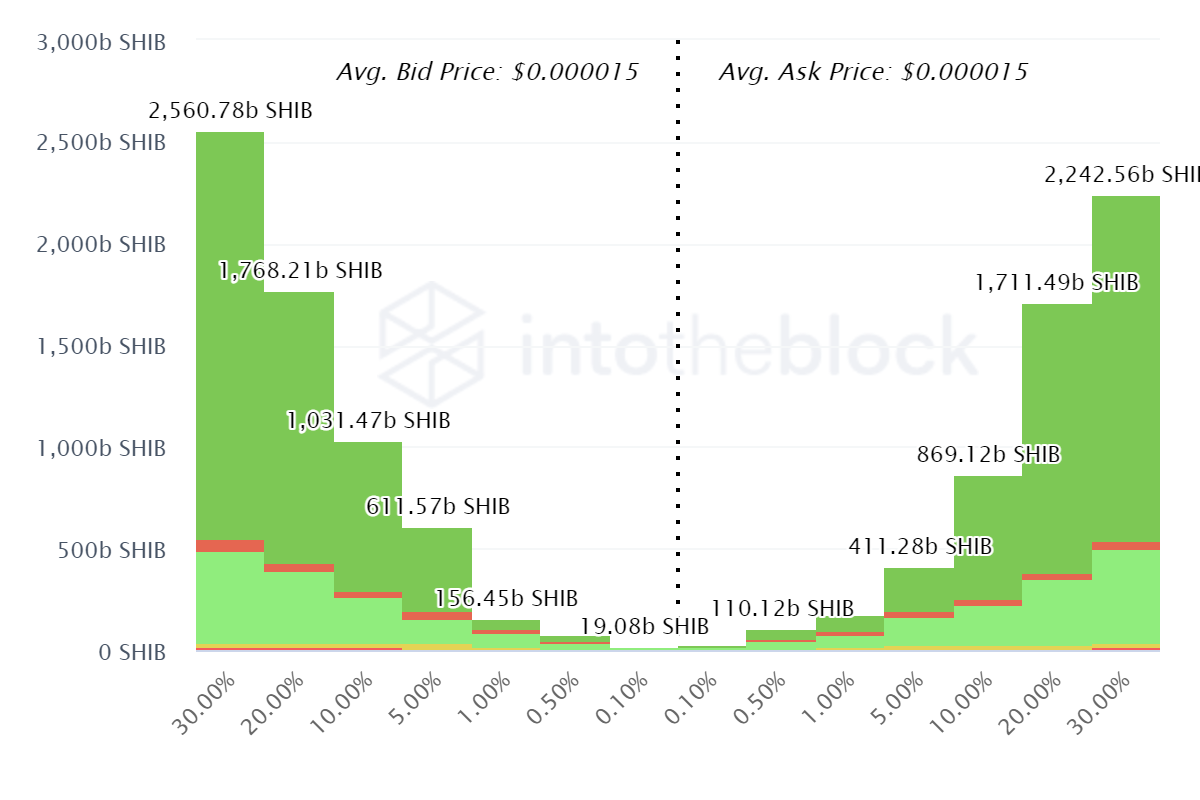 As for the entirety of the month, they have been very active with volumes averaging at $200-$300 million and it even crossed $1 billion on 26 November. 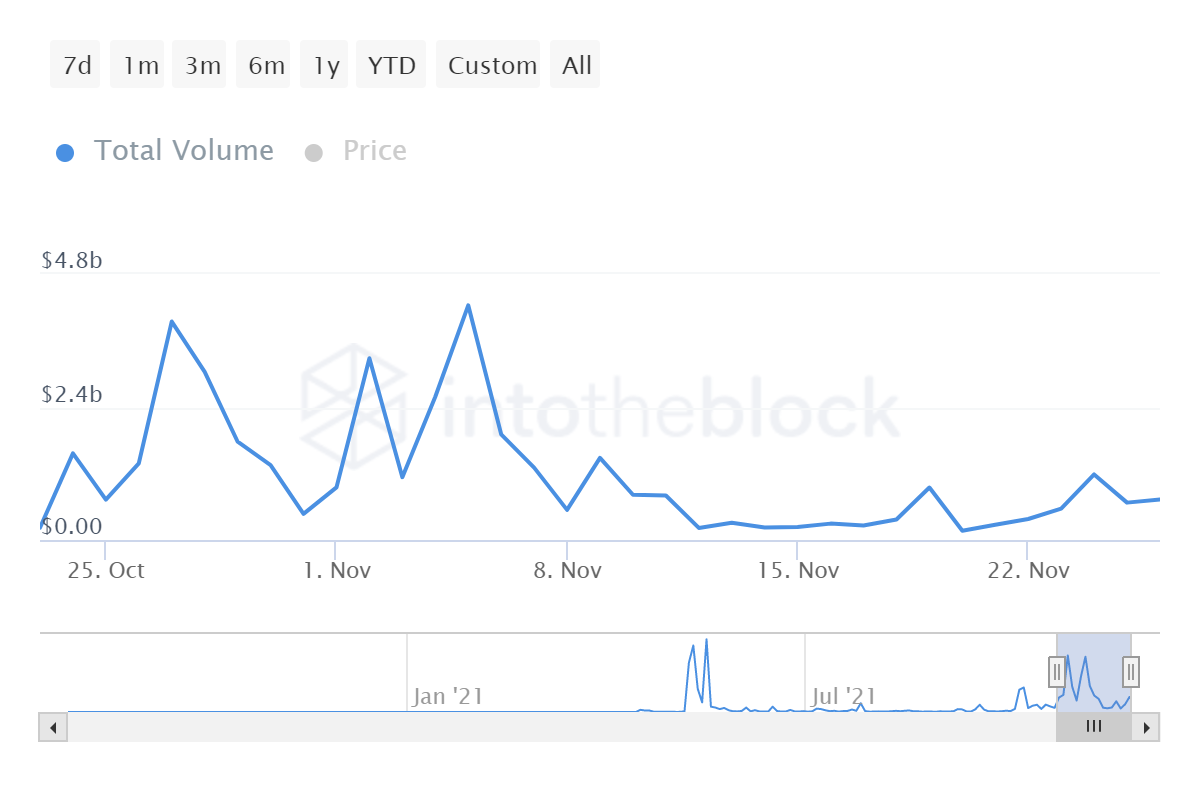 Further, since whales alone control 68% of all supply it wouldn’t be surprising if they try and acquire more. 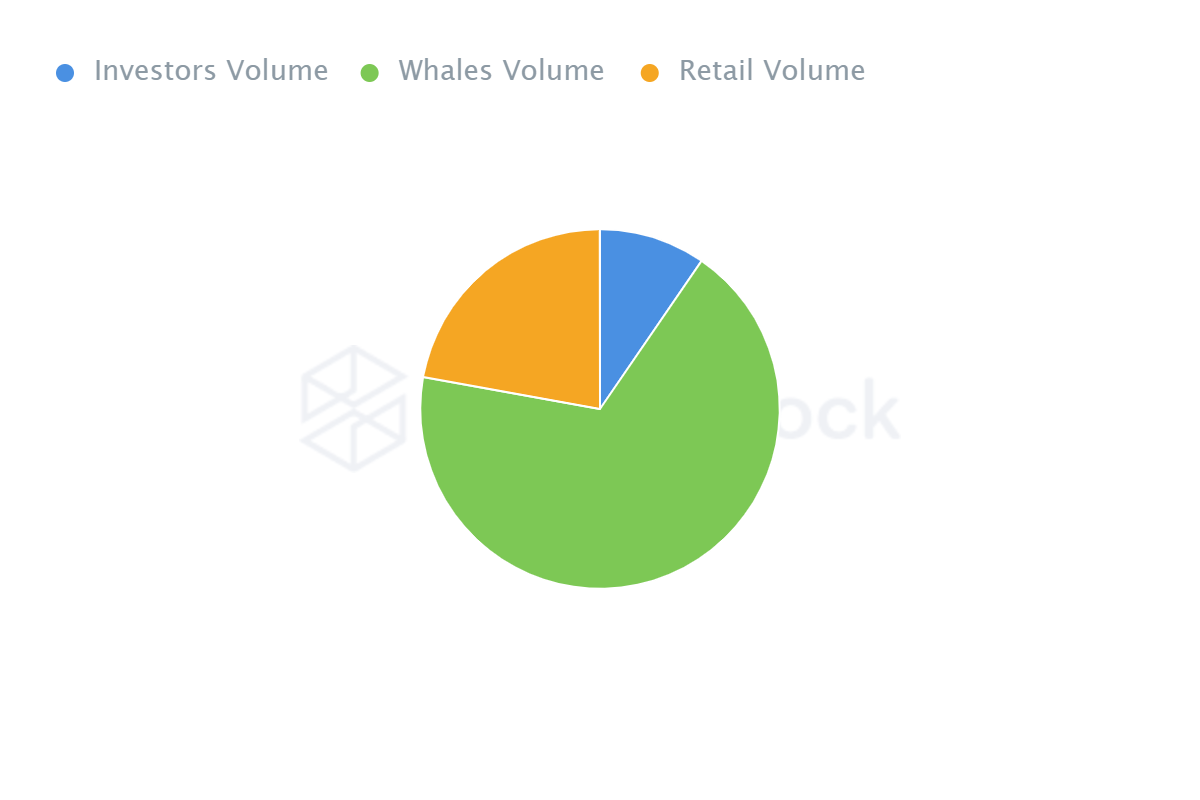 Anyhow SHIB’s loyal army continues to grow as the network achieved the milestone of one million holders on 25 November. Moreover, it also received support for deposit and withdrawal on Crypto.com via Cronos, so adoption too continues to rise.

Analyst calls this a ‘very natural corrective move’ for Bitcoin, before 2022