XRP briefly ascended past a region of supply and flipped it to demand, but was pushed lower once more. Aave saw a clean breakdown under $360 and bounced off the $300-level. Finally, VeChain projected relative strength in the market. 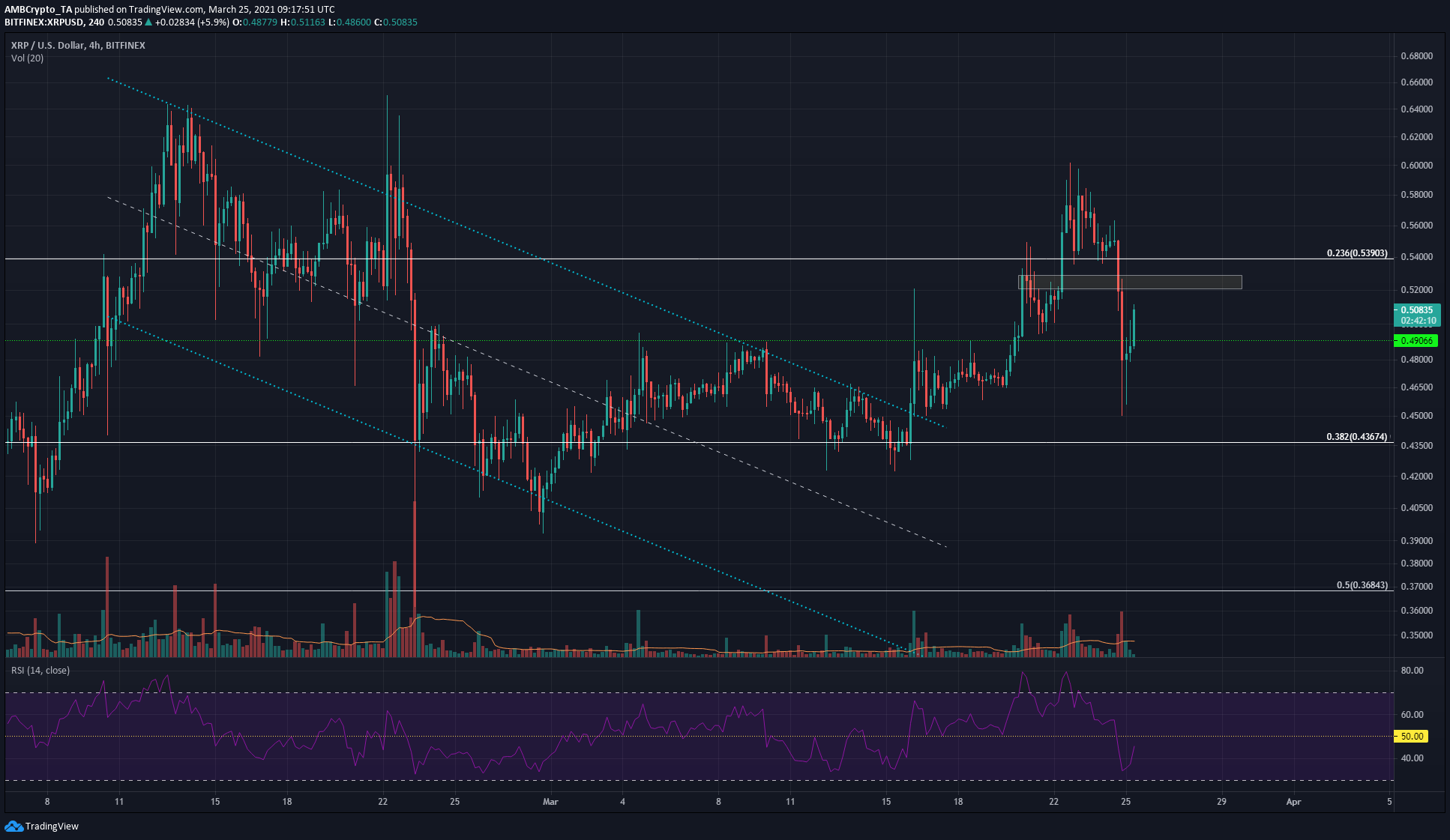 Since mid-February, XRP had been trading within a descending channel (cyan), with the same reversing in recent weeks to see a surge to $0.58. In fact, the alt looked to have flipped the $0.52-$0.528 region from supply to demand.

Recent selling pressure saw XRP plunge under this zone to find support around the $0.49 region and bounce to trade at $0.51, however, at the time of writing. The RSI continued to remain under 50, underlining that a bearish trend was in progress.

A retest of the $0.52-area as supply and another move south can be expected soon. 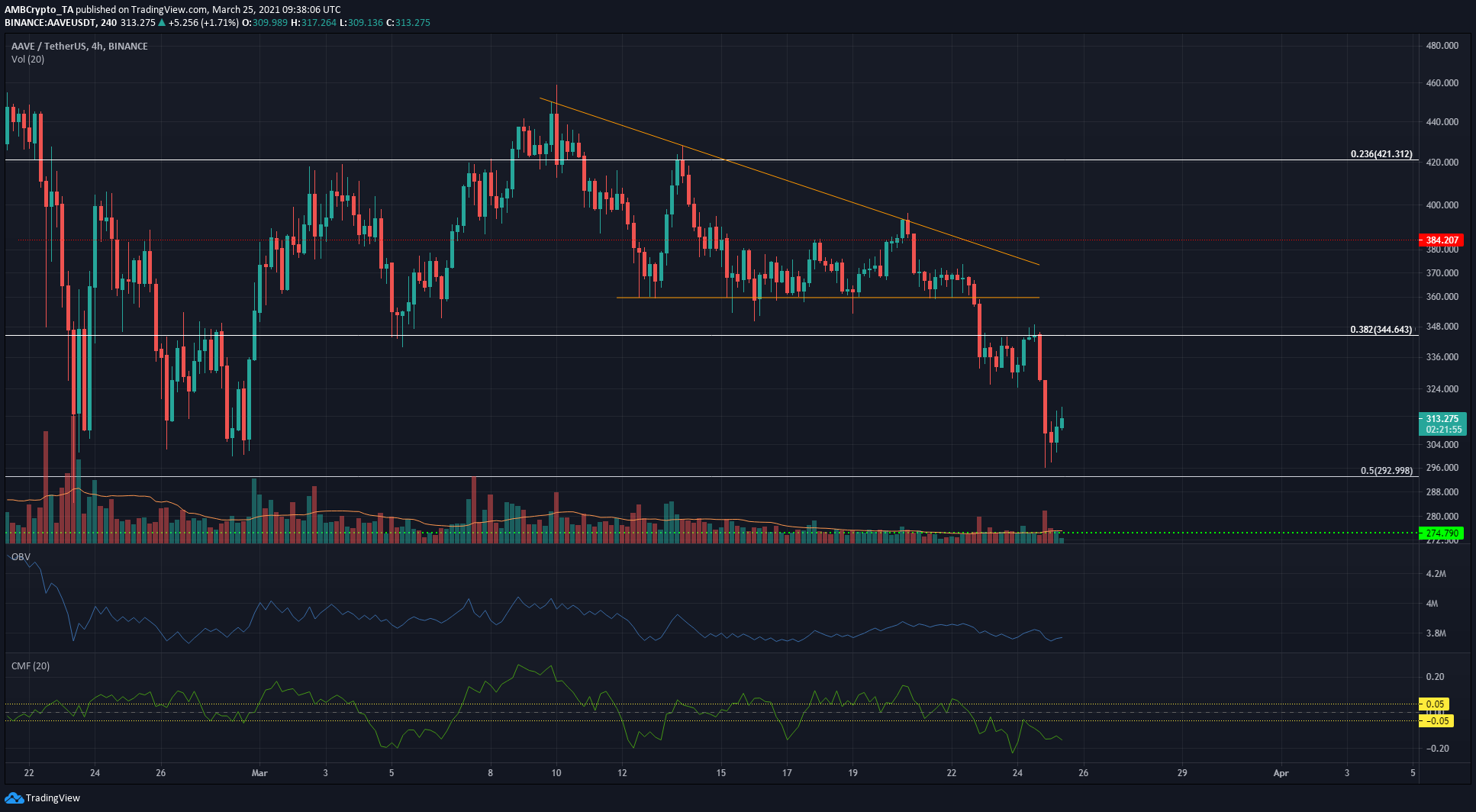 A descending triangle was seen on AAVE’s 4-hour charts (orange). It saw a breakdown beneath the floor of the pattern and retested as resistance the $344-level, a Fibonacci retracement level from a previous move to $582.

It also noted a bounce from the $300-region, but the technical indicators were all pointing towards seller dominance. The OBV has been on a steady downtrend in recent weeks, with the same seeing minor bounces in between southbound movements, showing a lack of buyers.

The Chaikin Money Flow was also under the -0.05 value, showing net capital flows out of AAVE markets. A revisit to $300 and a move below the same seemed likely, at press time. 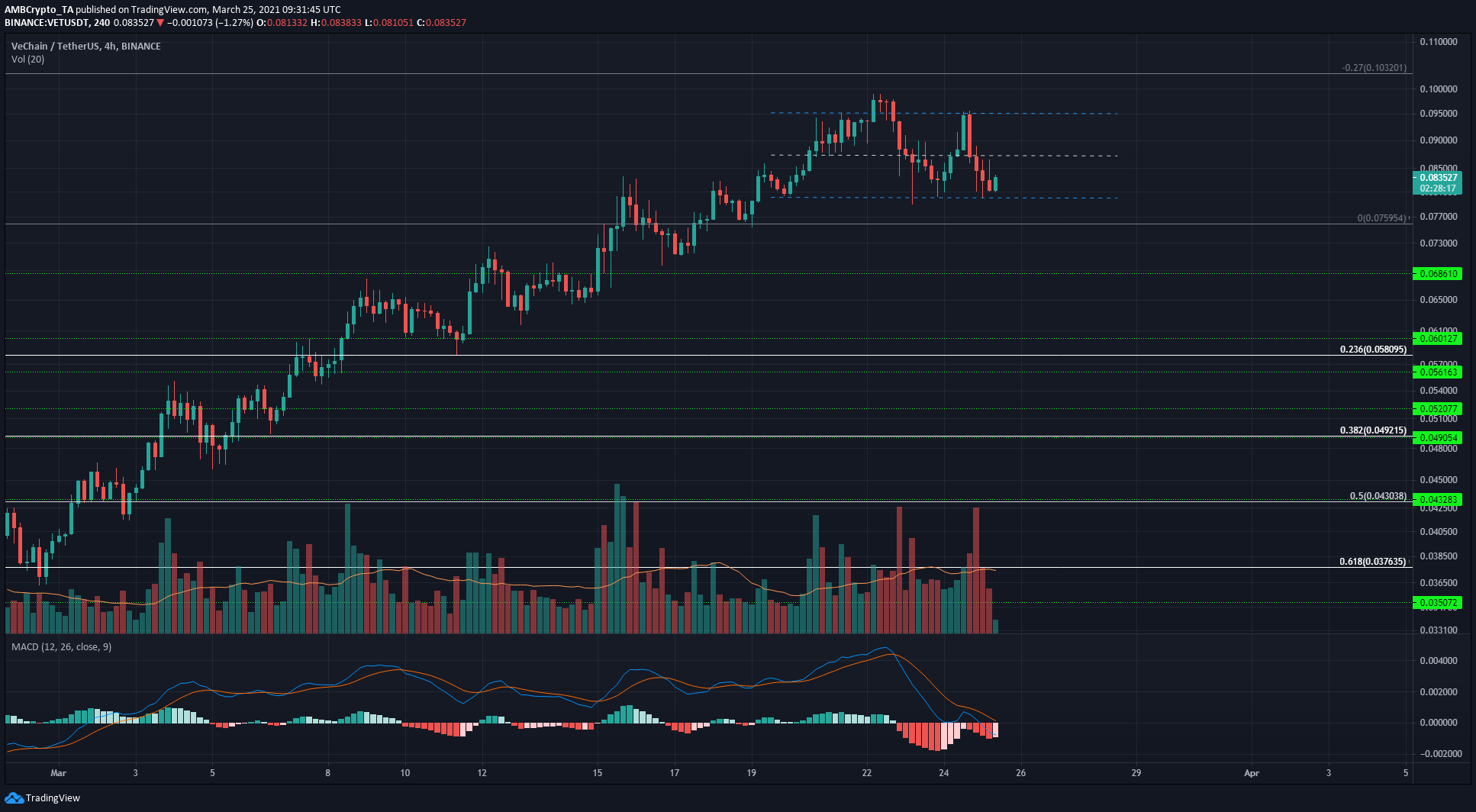 VET, it can be argued, is actually in a position of strength relative to Bitcoin and even the rest of the altcoin market, even though it lost 16% of its value in the last 24 hours. Against BTC, VET has been trending upwards over the past month. In recent days, even as Bitcoin chopped about the $54k-mark in the face of the Options expiry at the end of Q1 of 2021, VET held on to the $0.08-mark with strength.

It appeared to form a rectangle pattern, a range at the top of an uptrend. Breaking down beneath the range lows could see VET head further south, but there were numerous levels of technical support.

The range lows at $0.08 can be used to enter aggressive long positions with a tight stop-loss at $0.0785, expecting a move to mid-range at $0.087. However, these would be scalps. Momentum was with the bears, and long positions can be sought after a breakout past $0.095 to confirm bullish strength.

Bitcoin at $80k in April: What are the market expectations?