The cryptocurrency market as a whole has been on a severe downturn of late. Considering the first half of 2022, this isn’t something new either. The market capitalization of the larger crypto-market has fallen by over 14% in the past week alone. And, recent CPI numbers from the U.S have been nothing short of a kick in the gut.

However, the last 24 hours has been especially harsh on a few of the headline altcoins in the market – namely Cardano, Solana, and XRP. These have fallen by 12%, 8.3%, and 7.5%, respectively. Let’s take a look at their charts. 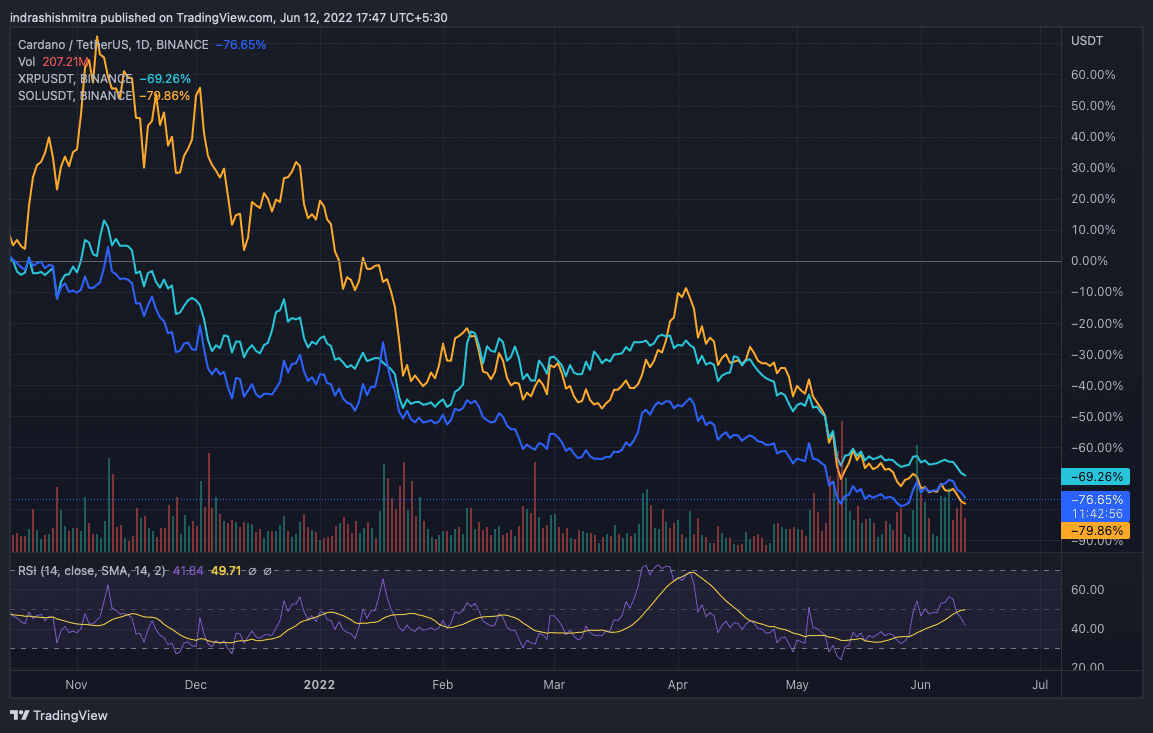 From the charts, it is quite evident that all these three coins have been falling in tandem since their November highs. Now, while the broader crypto-market fell by an odd 3.5%, one of these three coins managed to tank by double digits. The other two seemed to be just a blink away from breaching similar territory.

This has been one of the most hyped billion dollar plus cryptocurrency in the space. People have been promised a lot, but what of ADA’ price? Well, the downward slide that began mid-November and still is in the works – hasn’t been very helpful either. Even the anticipation of the Vasil hard fork hasn’t been enough to show some positivity on the charts.

Technically speaking – thanks to a small rally in the third week of March – ADA is trading above a long-term trendline resistance flipped into a support. However, one shouldn’t forget that it is still nearly 83% down from its November highs.

Now, it is well known that there may be a number of metrics that can indicate whether a coin is doing well or not. However, only a handful that tell you so the quickest. Most indicators are lagging – Prices of these assets are the quickest indicators of bad news and right after that comes active users count.

In fact, according to data from Santiment, Cardano’s Daily Active Addresses have been eroding almost on a daily basis.

Now, this altcoin can be best described as perplexing, but we’ll come back to that later.

From a technical point of view, it has broken below every imaginable support level. It is now trading at its August 2021 levels, levels that were seen before its near 500% rally on the charts.

However, this comes despite it having several good things in its bag. From burgeoning NFT mania on the network to incredible transactions speeds – Solana has it all. But, its occasional network blackouts have been a source of constant concern and pain for investors and network participants alike.

Now comes the perplexing part – On-chain metrics seem to be holding somewhat steady, despite the wholly negative price action. For example, its Development Activity data is just a bit below its November 2021 levels! Considering how much of a market cap it has shed in the interim – this is indeed perplexing. Funnily enough, its social dominance data has also been doing pretty good.

XRP has been trading within somewhat of a range over the past month and with positive developments coming in from inside the courtrooms, its 7.5% fall did come as a surprise. However, it is mostly in line with the heavyweights of the market including Bitcoin and Ethereum. The latter two fell by 5% and 7.2%, respectively, as of press time.

It has been forming a base around the $0.3-level and investors are waiting patiently to see the day when it manages to break out of the $1-zone. Along with that, on-chain metrics seem to suggest attractive valuations for the coin too.

XRP’s 30-day average MVRV Ratio is currently around -12.5%, suggesting that it is trading well below ‘fair value.’

Ergo, broadly speaking, except for Cardano, despite major sell-offs, Solana and XRP are holding out pretty well. However, with the crypto-winter raging on well below freezing temperatures, your guess is as good as mine as to when these coins will be able to revive themselves.

With U.S CPI data pushing markets off the ledge, here’s what investors need to know

Bitcoin: Why this investment expert believes BTC could touch highs of $250k