For decades, contemporary artist Cai Guo-Qiang has been internationally acclaimed for his unique gunpowder art and large-scale installations. In 2022, on the occasion of the Year of the Tiger, Cai Guo-Qiang and his daughter Cai Wen-You collaborated for the first time to create a small gift for an important “tiger” in their life: Cai’s wife and Wen-You’s mother Wu Hong Hong. Together, the father-daughter duo created the interactive Tiger Year, Tiger Explosions NFT, announced on Hong Hong’s birthday April 26th, in collaboration with 721Land.

While the work was conceived in the hands of these two artists, it calls for collectors’ input to bring it to maturity. After collectors enter their birthdays on 721Land’s website, different birthdates will trigger different dynamic visual effects of the “golden tiger,” including nine blessings for collectors whose birth years fall on tiger years and one blessing for all other collectors. The birthdates of all collectors will be recorded directly on the blockchain of the artwork and circulated in perpetuity.

“Tigers” born in different years will receive different blessings for this year. The different ages of “tigers,” ranging from 0 to 96 and beyond, will result in different blessings, such as: Grow strong like a tiger; Elevate the body and mind; May you grow wings, amplifying your power; Soar to new heights, like a great bird; Unbridled progress, like a rising sun; Eternal blessings of luck; May all your wishes come true; May you stay happy, safe and sound; Endless happiness and longevity.

For collectors of this NFT who were born in a Year of the Tiger, owning this work symbolizes savoring a piece of good fortune and receiving blessings. Once this Year of the Tiger is over, on the first day of the Lunar New Year in 2023, the golden liquid will automatically revert to the image of the golden tiger, symbolizing “the passing of bad luck.”

Inspired by tigers, gold, and their humanistic connotations, this NFT’s design originated from the Tiger Year red envelope designed by Special Special, a creative platform founded by Wen-You. Tiger is a brave and fierce Chinese zodiac sign and gold gives off a steady and splendid feeling. The ancient Chinese theory of the Five Elements professed “fire produces earth, earth bears gold, and gold collects water.”

Gunpowder, known in Mandarin Chinese as fire medicine, and gold both have their origins in alchemy. Throughout the history of currency transactions––from the usage of ancient gold and copper coins to modern traditional financial systems to contemporary blockchain and encrypted tokens––the history of alchemy persists. Cai Guo-Qiang is often referred to as the “contemporary alchemist for his unique gunpowder art.

Against this background, the Tiger Year, Tiger Explosions NFT combines “explosion” and the melting of the golden tiger through alchemy, tempering, generating, and restraining the fierceness of the tiger to achieve a balance of fortunes in the year of the tiger and drive away any lurking evil spirits or disasters.

“It was a great honor to collaborate with Mr. Cai and Wen-You. Through this collaboration, we hope to offer a unique NFT artwork, allowing collectors to experience the interactive and immersive nature of this work through the 721Land platform. The spirit of innovation and exploration of these two artists aligns well with the philosophy of 721Land. We also hope to share with everyone aspects unique to Chinese culture and the familial warmth and affections embedded within Tiger Year, Tiger Explosions. This work presents an innovative form in the NFT space, also bearing precious thoughts and blessings from Cai and his daughter.” ––Vicky Yu, Founder of 721Land

“Compared with my other NFT experiments, Tiger Year, Tiger Explosions is more about sharing love between family members; I am infinitely blessed to be able to collaborate with my daughter! I invite collectors to view this NFT as a little gift for the Year of the Tiger, and pass on this warmth to their loved ones.” –– Cai Guo-Qiang. 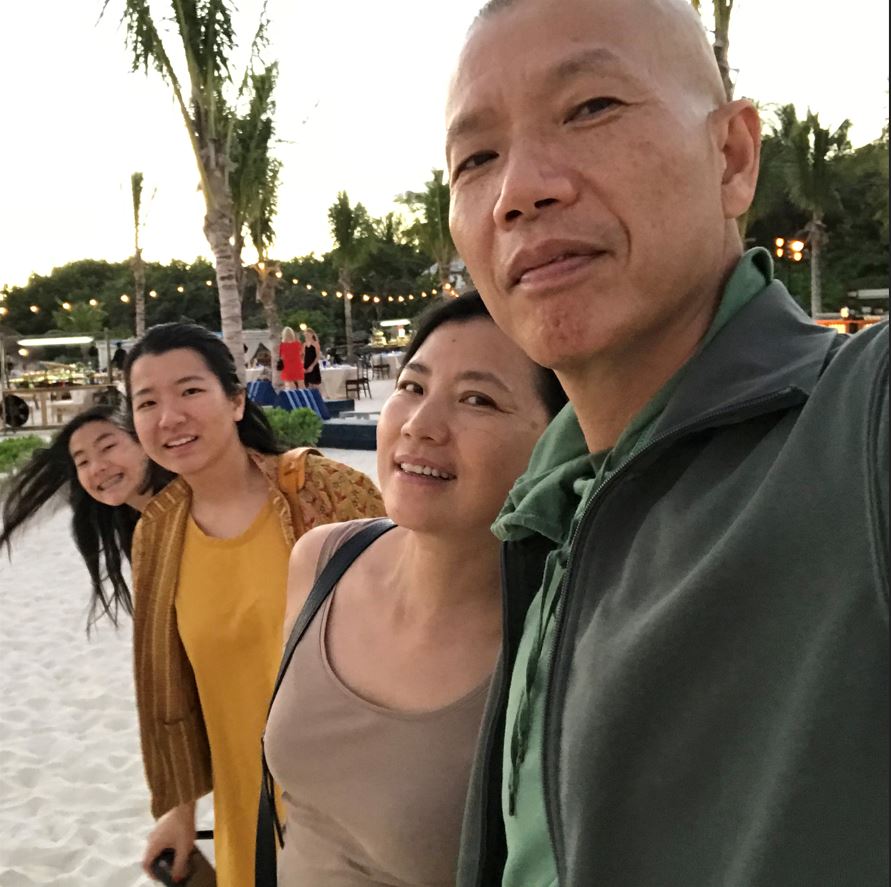 Cai and his family in Mexico, 2016. Photo by Cai Guo-Qiang

One’s birthday is like their private code. Once entered on the platform, the collector’s birthdate will be permanently imprinted on the blockchain. This way, the NFT connects collectors with the artists as collaborators, coupling them with the natural cycles of life, breathing into technologies such as NFTs and blockchains a novel inheritance encompassing humanism and history. Additionally, beginning with this project, the artist hopes to create a series of NFTs that will include all twelve Chinese zodiac signs and their respective characteristics.

721Land is a platform centered around the Metaverse for the creation and trading of NFTs. The platform derives its name from the “golden standard” ERC 721. In 2017, ERC 721 was established as the standard for non-fungible digital assets (non-fungible tokens/NFTs), with each token possessing unique properties. 721Land was founded with enthusiasm and faith in the NFT community and features attractively low transaction fees. 721Land showcases the beauty of NFTs by collaborating with important artists. It aims to build a community-based ecosystem and provide users with an immersive and ever-extending experience while emphasizing sustainability, connectivity, and self-growth.

In order to enhance the user experience of 721Land, the platform also created an NFT Hall for users to enjoy. Users are able to check out the 721Land hall in the Crypto Voxels metaverse using these coordinates.

Wen-You Cai (b.1989) is a self-identified “reluctant artist,” and founder of Special Special, a New York-based creative platform that presents art objects to be touched, used, and played within all facets of life. As a Tokyo-born, New York-raised, Chinese woman, her cross-cultural, often confused, identity has been infused in all areas of her creative endeavors as portrayed in her photography and curation. She frequently collaborates with artists and designers to seek curiosities beyond the conventional realm of art. She has authored a memoir titled When You Make No Art documenting her experience growing up in museums around the world, and a photography book Rooster Tiger Sheep by Snake featuring photographs of her family taken over the span of twelve years.

She received her BFA from Rhode Island School of Design and her MA from Goldsmiths College, University of London.

Cai Guo-Qiang was born in Quanzhou, Fujian in 1957. In the early 1980s, he was trained in stage design at the Shanghai Theatre Academy. From the end of 1986 to 1995, he resided in Japan.  Grounded in the conceptual foundations of eastern philosophy and contemporary social issues, his artworks span multiple artistic mediums including painting, installation, video, and performance art. His often site-specific artworks adapt to local conditions, interpreting and responding to the local culture and history as well as establishing a dialogue between viewers and the larger universe around them. His famed explosion art and installations are imbued with a force that transcends the two-dimensional plane to oscillate freely between society and nature. 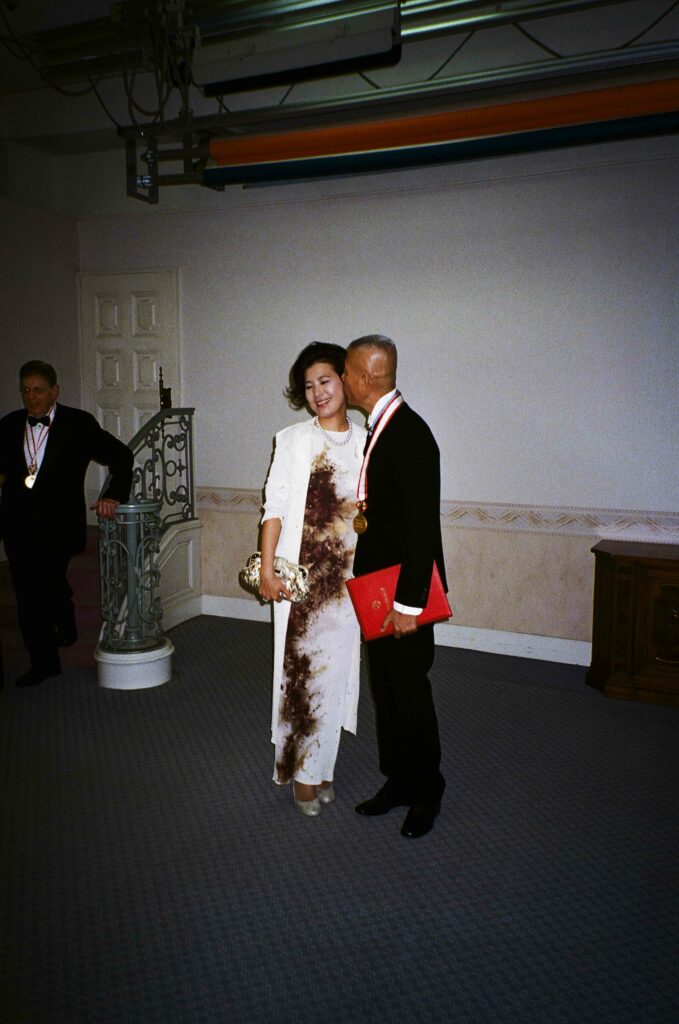 Cai and Hong Hong are photographed in the photo room after the Praemium Imperiale award ceremony, while Phillip Glass awaits his turn at Hotel Okura, Tokyo, 2012. Photo by Wen-You Cai

For the past three decades, Cai Guo-Qiang has held numerous solo exhibitions in major art museums around the world, including the Metropolitan Museum of Art in New York in 2006 and his retrospective at the Solomon R. Guggenheim Museum in New York in 2008. In 2015, Cai realized the explosion event Sky Ladder in his hometown of Quanzhou, Fujian. The artwork became the centerpiece of an eponymous documentary directed by Academy Award winner Kevin Macdonald and globally distributed on Netflix.

In recent years, he has embarked on his Individual’s Journey Through Western Art History —a series of exhibitions held in world-renowned museums, including the Pushkin State Museum of Fine Arts (Russia, 2017), Museo del Prado (Spain, 2017), Uffizi Galleries (Italy, 2018), National Archaeological Museum of Naples and Pompeii Archaeological Park (Italy, 2019), and the Solomon R. Guggenheim Museum (USA, 2019). From December 2020 to February 2021, Cai held his exhibition Odyssey and Homecoming at the Palace Museum in Beijing, marking the first solo exhibition of contemporary art in the museum’s history. In July 2021, Odyssey and Homecoming traveled to the Museum of Art Pudong in Shanghai as one of its inaugural exhibitions, where it will remain on display until April 5, 2022.

In July 2021, Cai was commissioned by the Rockbund Art Museum in Shanghai to create his first NFT, Transient Eternity—101 Ignitions of Gunpowder Paintings, to mark the 10th anniversary of the museum’s establishment. The NFT was jointly launched with TR Lab, and its virtual charity auction set the record for the highest NFT sale from a non-crypto-native artist, realizing a total of 2.5 million USD. The proceeds were donated to support the Rockbund Art Museum in Shanghai and the Asian Cultural Council (ACC) Cai Fellowship Program.

Cai has lived and worked in New York since 1995.