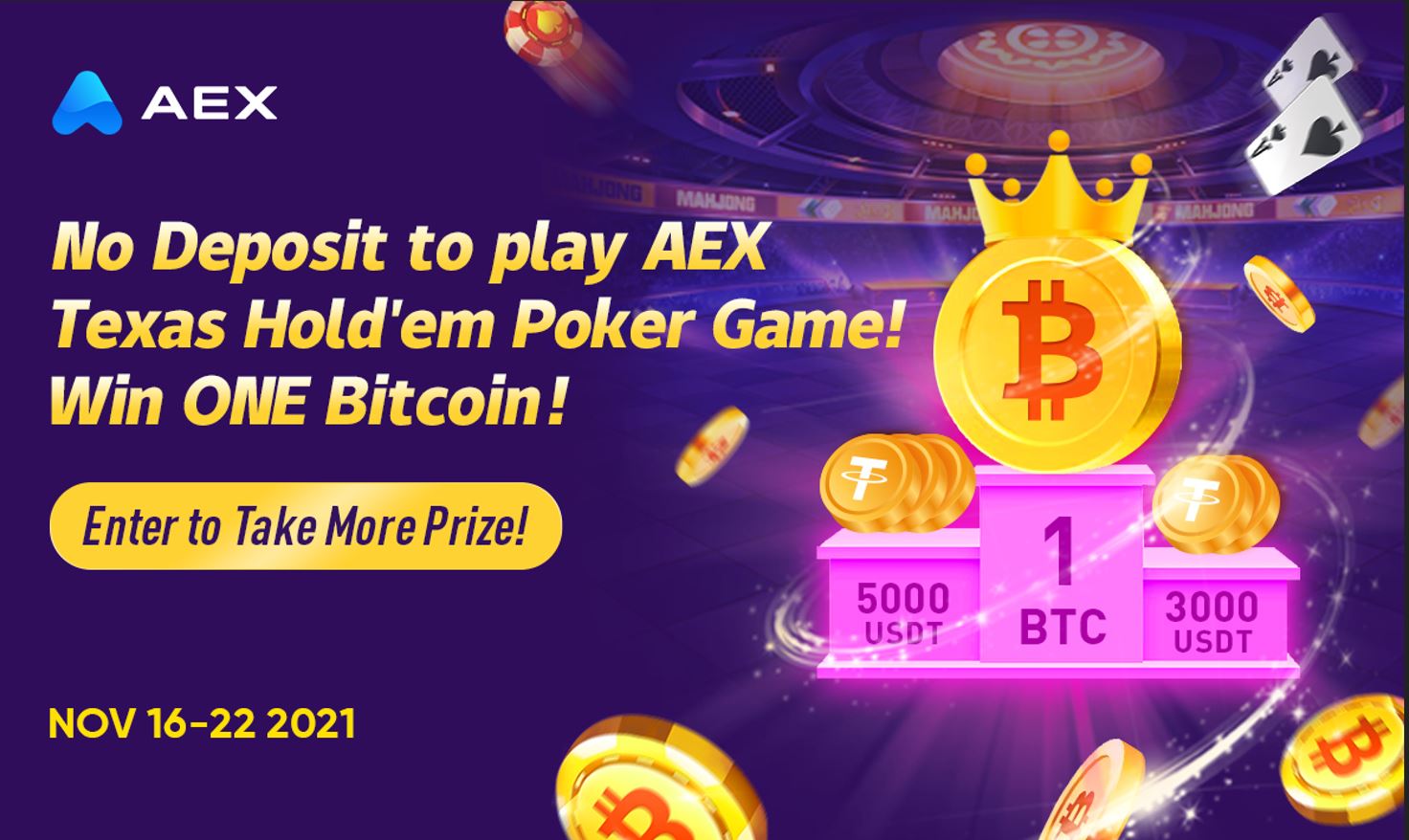 AEX celebrated its 8th anniversary with the 2nd edition of the Texas Hold’em Poker Tournament for its users. The tournament was live between 16 November-22 November and have users a chance to win 1 BTC without having to put in any deposit.

The AEX team created the platform in order to provide cryptocurrency enthusiasts a discussion space wherein they can know more about crypto and the market while also getting a chance to trade.

Every player gets 3000 points at the start of the game for free and the game sets in a resurrection mechanism. Whenever a player has less than 100 points, they enter the resurrection state and have to complete tasks to get back in the game.

AEX was founded in 2013 and is operated by Bit World Investments Limited. The platform is one of the oldest digital asset exchanges and has evolved from being an original transaction matchmaker to a global digital asset management service provider over time.

The platform has been an advocate of ‘safe investment and sound appreciation’ in the past 8 years. AEX has fiat currency trading, spot trading, contract trading, lending, DeFi mining, staking, and finance.

AEX has been able to maintain and provide its users with competitive trading, DeFi mining, and much more through bull-bear shifts, policy changes, and much more. It was the first exchange to introduce DOGE, XRP, BTS, XEM, XLM and ARDR in 2013. This helped users unlock the price potential that other cryptocurrencies carried while a lot of exchanges at the time only recognized BTC.

With the 8th anniversary, AEX intends to provide users with the chance to gain access to mainstream cryptocurrency for free.

Some of the core values of the AEX platform are:

AEX has a record of 8+ years of safe operation with a cumulative userbase of more than 1 million. The exchange has 300+ trading pairs listed with a 92.3 billion cumulative savings amount.

AEX is one of the leading digital asset exchanges that has been a part of the crypto space for a long time evolving with the space. The Texas Hold’em Poker competition gives users a chance to be a part of the 8th-anniversary celebration of the platform.

AEX Second Global Texas Hold’em Competition ended successfully, giving away a total of about $800,000 worth of airdrop benefits, including 1BTC, 55,000 USDT, and millions of GATs, benefiting over 10,000 users.

The top three players in the individual points ranking were occupied by players from China, Ukraine, and Singapore, who won 1 BTC, 5,000 USDT, and 3,000 USDT respectively as superb prizes.

The domiciles of players ranked from 4 to 10 cover countries or regions such as Russia, the UK, Hong Kong, China, and Singapore, and they all received 1,000 USDT.

For more information on AEX, please check out their official website.