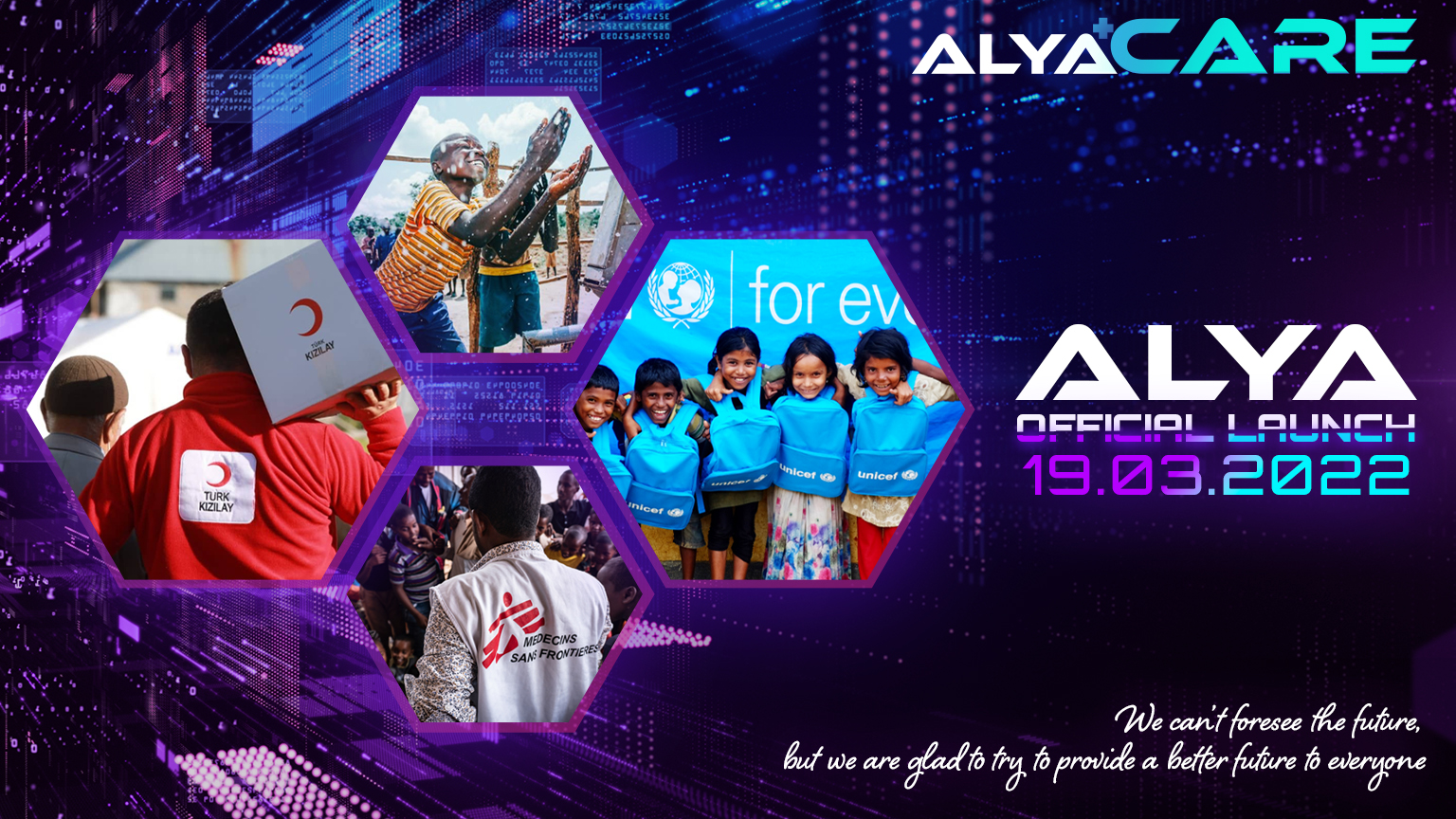 ALYATTES Platforms made its official launch with a great organization last weekend with a large audience at The Sense Deluxe Hotel in Antalya. ALYA Miners and representatives from all around World such as Turkey, Macedonia, Austria, Kazakhstan, Azerbaijan and Israel have attended the launch.

The launch started with the opening speech delivered by Ahmet GENÇ, ALYATTES Field Coordinator. Ahmet Genç started his speech by thanking the participants. He then concluded his speech by explaining the path to success and the good examples that can be experienced on this path.

Following the opening speech, ALYATTES CTO Melih Can MAVİŞ continued the presentation with the introduction of AlyaFinance v2, which is completely developed in house by the ALYA Software Team. He then explained the innovations made in the new version AlyaFinance. The CTO has presented a step-by-step guide belongs to the AlyaFinance v2 to navigate users. Afterwards, he left the stage stating that he owed a debt of gratitude to the Technical Team employees who played the biggest role in this success. 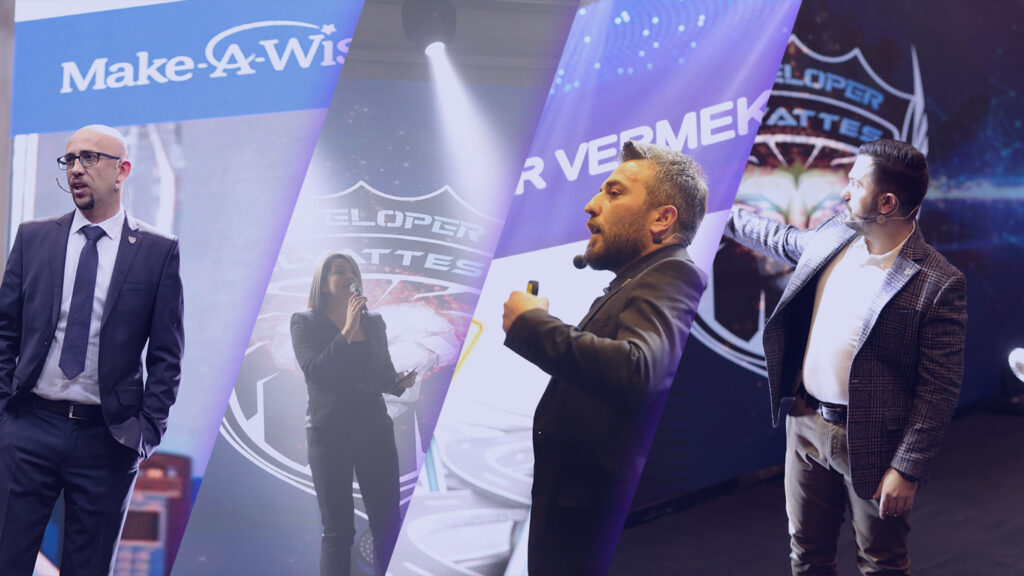 Later on, CEO of ALYATTES Sinan AY took the stage and started his speech by thanking the Alyattes Miners who made him feel this proud. After reminding the achievements that ALYATTES has accomplished so far, he again drew attention to the fact that ALYA is “the world’s first and only decentralized deflationary cryptocurrency”.

ALYA Care Foundation donated $5000 to Water.org, one of the pioneers in solving the world’s water problems, $5000 to UNICEF’s Fight Against Famine Project in Africa, $2000 to KIZILAY’s Aid to Palestinian Children Project (30.000 Turkish Lira), €1000 ($1100) to Doctors without Borders, which provides health services to the needy in 70 countries around the world, and finally, 1000$ to Make-A-Wish, which fulfils the wishes of seriously ill children. He finally shared the receipts of these donations with ALYA lovers. 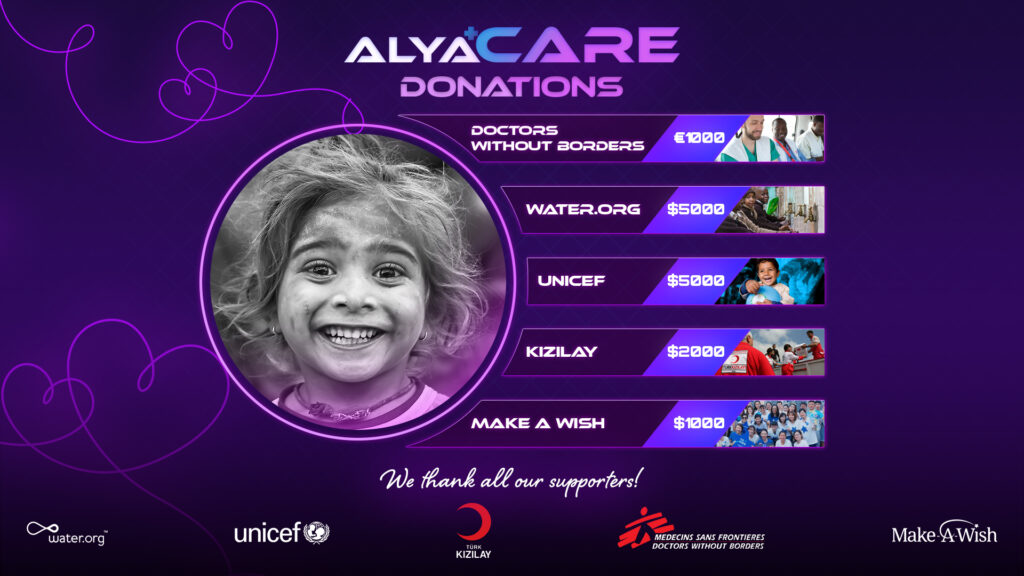 It was stated that the ALYA Care Foundation will continue its operations by getting stronger. In the future, the management of this foundation will be chosen from among the members of the community and the team will personally go to the countries in need within the limits of the possibilities and perform its operations in first-hand.

After it was announced that 290,000 ALYA was distributed to ALYA Holders for the launch, the burning transfer of 5,000,000 ALYA worth 3.2 million dollars was shared with the participants on the screen. ALYA started its adventure on January 5, 2022 with 205.000.000. After this massive burning, the maximum total Supply was reduced to 199,470,000 and the total value of circulating ALYAs was increased.

At this meeting, the ALYA Team shared with ALYA Miners that the incorporation process continues in Dubai Silicon Valley, which has started to become the centre of the crypto money industry.

ALYATTES started its journey with pre-sale on November 15, 2021 and continued with its listing on January 5, 2022. We all witness that Alyattes continues on its journey with steady and strong steps by quickly absorbing the coin inflation that occurred in the presale, thanks to its strong deflationary structure and mining feature.

ALYATTES has crowned this strong upward momentum, the high level of trust it gives, and this path it has walked without sacrificing transparency, with a wonderful launch.

What is ALYATTES in Brief?

ALYATTES was developed on the Binance Smart Chain network and it is a new generation Token that has been certified as decentralized and contracted by CERTIK, the world’s best-known auditing company in the field of Security Audits. ALYA Token can be mined individually with Proof of Stake and Proof of Active methods, or it can be mined through Pool Mining.

The auto ecosystem integrated into ALYA Token distributes the 5% deductions made in each transfer to namely 2% to Holders, the other 2% is sent directly to burning wallet and the remaining 1% is transferred to the funds of the ALYA Care Foundation. In this way, it provides a daily increase even for those who only keep Alya in their wallet, while reducing the amount in circulation after each transfer with 2% burns, and at the same time guaranteeing the future of ALYA Care Foundation with a 1%.

ALYATTES Team stated in their roadmap and Whitepaper that many sub-platforms centered on ALYA Token will be developed and made available for crypto lovers and the ALYA community. These platforms are announced these one by one.

ALYA Token made its first stock market listing on the Pancakeswap Decentralized Exchange on January 5, 2022. As of the writing the team has added the liquidity of $523,000 and locked 100%. Afterwards, the team was not satisfied with the live transmission of all its data (Following Listing) on leading crypto platforms such as Coinmarketcap and Coingecko, and took its place in the price monitoring lists of market makers such as Binance, Crypto.com and Coinbase.

All necessary information about ALYATTES Platforms and ALYA Token is available at www.alyattes.io and Whitepaper.