Since the blockchain industry began, it has seen numerous consensus mechanisms. These include Proof-of-Work which often requires substantial computing power, and Proof-of-Stake which relies on the amount of stake, such as coins, a participant holds. Then, there is the Proof-of-Time (PoT) consensus mechanism, which is something never seen before in the crypto world.

Not to be confused with Proof-of-Elapsed-Time (PoET), PoT enables a system of causality, ensuring that what came before and what came after is impossible to alter. Incoming time data from participants, or nodes, is first validated before being hashed. Essentially, time data forms the building blocks of a blockchain network utilizing a PoT consensus mechanism.

This consensus mechanism is unique to Analog, a blockchain startup that is using it to develop its one-of-a-kind, time data-based network. Analog aims to cut through the noise of misinformation that is typically inherent in historical records and instead present an accurate and factual account of time data onto its network.

While the use cases of various blockchains are usually limited to that of finance, Analog aims to provide a wide variety of real-world use cases to the common user, covering sectors that include education, healthcare, construction, logistics and more.

Backed by the Analog Foundation and boasting investors such as X Fund, Black Label Media (a Hollywood Studio behind movies such as La La Land and Sicario), Ekesius Capital, Wieckowski Investments and Educated Ventures, Analog is a PoT network based on time-stamped data management and utilization. It is underpinned by the Analog Timechain, to which time data from nodes are submitted.

This enables Analog to carry out its mission to create the world’s first blockchain-based Timegraph, which is a resource of time data that could be used to incentivize users to perform a call-to-action within a predefined duration. This involves smart contracts built into dApps that interact with the Timegraph.

A timegraph is an on-chain aggregated database of real-world time information submitted by nodes and works as an immutable and uncensorable version of history. It has a flexible nature as it is searchable and filterable, thereby having the potential for a variety of use cases.

The Analog Timegraph API can be simply described as the frontend to the Timegraph’s backend. It is an interface that helps with interacting with complex data on the Timegraph. Analog’s Timegraph API uses a privacy-enabled, recursive, zero-knowledge proof protocol (Zero-Knowledge Succinct Non-Interactive Argument of Knowledge or zk-SNARK) that allows the transfer of time data cross-chain and bidirectionally between applications without compromising the underlying time data itself. 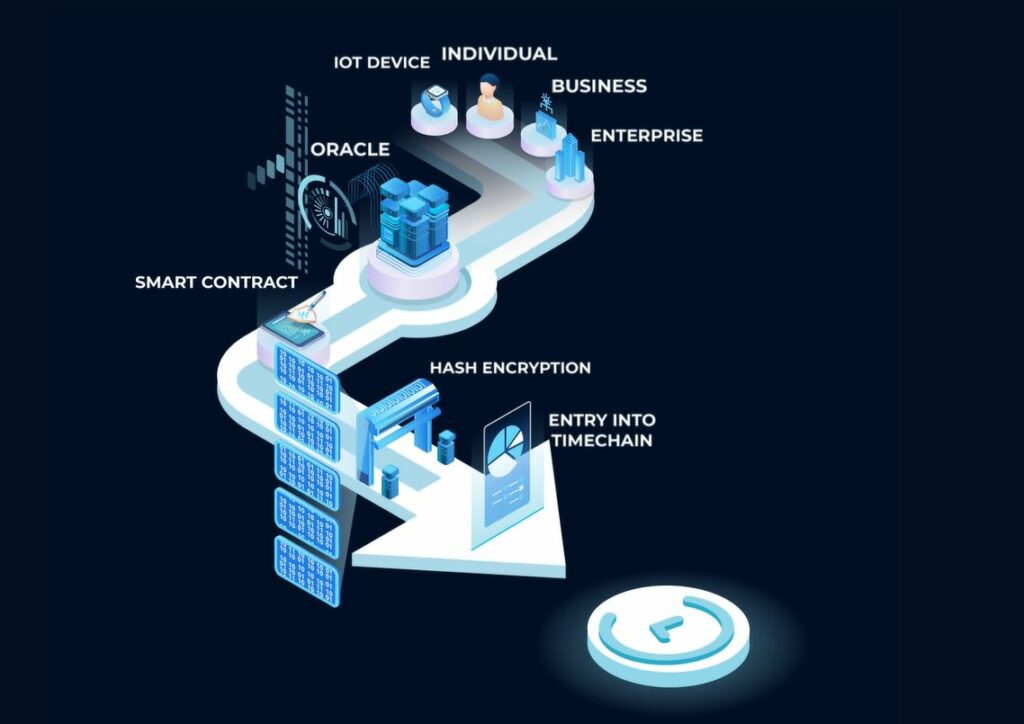 How Does Analog Work?

Time nodes, which consist of individuals, organizations, software programs and IoT devices, post time data to the Timegraph. In return, they extract and receive time data too. This time data, on occasion, needs to go through various oracles in order to be authenticated.

Analog essentially functions as a hub for time nodes to submit time data. It normalizes the data, and employs a prover program to translate it. The data is then encrypted (SHA-256) and pushed through a validator before entering the Timechain and interacting with other nodes which have permission to pull that time data.

Unlike centralized systems like Facebook and Google, the time data is never stored in a database, as Analog merely facilitates the authentication and transfer of time data to other dApps – triggering their smart contracts and, in turn, actions in their apps. With the zk-SNARK proof protocol, only relevant time data is utilized at pertinent points, ensuring user privacy is maintained, and sensitive information is never exposed.

Take this example of how Analog functions. A building contractor tasked to perform renovations to the pool deck area of an apartment block must create reminders for himself to get the job done in a timely manner.

He tells his assistant to bring the job up at the next Homeowner Association (HOA) meeting.The HOA validates this time data request before keying it into the building management software system (dApp), which is linked to Analog through the use of oracles. This software has a smart contract installed that will send the time data to the Timechain. It’s set to remind the building contractor continuously until he finishes the renovation task (thus completing the call to action). Once the HOA confirms the job is done, he’ll receive his incentive, namely an ANLOG token reward.

Neither the contractor nor the HOA actually gets to access the time data, as their interaction is limited to end-user options of what’s presented in the dApp’s UI. Similarly in another example, a delivery driver looking to deliver a package sent by Mary Jane to John Doe would be able to see in his Analog-supported delivery management app whether he should attempt delivery, as John Doe may not be at home to receive it.

The app would be able to determine, via John Doe’s submission of time data, if he is at home or away – perhaps on an engagement until 3pm or on vacation until the weekend. The delivery driver won’t know what John Doe is up to, because all he would see are ‘deliver’ or ‘don’t deliver’ options on the app.

A use case of how the Timegraph could be applied is the Surfside condo collapse in June 2021. Investigations into the tragedy revealed that improper maintenance was a major contributing factor to the building’s structural failure.

Analog’s Timegraph API could have been used to incentivize the maintenance crew to perform crucial maintenance and submit time data as proof while informing relevant parties such as residents and local authorities of the status of the works (which indicate the building’s structural health) as well.

The Analog Network is the combination of participating community members and technical mechanisms that power both Analog and the Timegraph. The ecosystem consists of time nodes, oracles, smart contracts, dApps, DEX, end-users, and staking mechanisms, all revolving around time data that is protected by the zk-SNARK zero-knowledge proof protocol.

Analog has developed a mobile app that lets the community submit useful time data into the Timechain easily. Users will be able to create updates, or ‘Analogs’, using the app which are visible to relevant parties and searches. For instance, entering ‘Christmas Party’ in the app’s search field would bring up relevant real-time Analogs based on the searcher’s location and other unique factors.

The app also pulls in relevant time data from connected third-party apps, such as calendar schedules, upcoming local events and monthly billing information, to help users take preemptive time-based actions without accessing several other apps, thus saving a lot of time. Users can select which external apps and what information they want to sync with Analog, giving them a tailor-made solution to conveniently tracking the singular and recurring details of their daily lives.

The team at Analog built a wallet as well that allows users to store ANLOG with support for more tokens soon. Analog also plans to build a DEX that will give users a chance to provide liquidity, stake, and swap tokens to get ANLOG rewards. The DEX will be built in a trustless manner meaning that users’ funds and personal data are preserved.

Some of the major features of Analog are:

ANLOG is the native token on the Analog Network. It is a BEP-20 and ERC-20 compatible token. It has a total supply of 13.8 billion which would be further distributed, as a 51% share would go to the node operators.

A 20% share would go to the Analog core team and its Zug-based foundation while an 18% share would be set aside for public sales.

A 10% share would be for staking rewards while the last 1% would go to advisors and strategic partners.

The ANLOG token will be available on Uniswap and Pancakeswap soon and CEX listings shortly after. It will be used to incentivize users on the Analog network. Token holders will also get a chance to stake their tokens and get rewarded over time with their APY and benefits.

After the Timechain mainnet is launched, stakeholders will also get a chance to take part in the project’s governance. The platform will also have a 1-1 swap for the initial ANLOG ERC-20 and BEP-20 tokens for the native ANLOG tokens that are minted from the Timechain.

Analog’s aim of developing the first-of-its-kind Timegraph network is part of its vision of creating a world where time data communicates with other time data to make life easier for everyone, without sacrificing privacy.

For more information on Analog, check out their official website.

Spanish banks are eager to offer crypto, but when will the central bank oblige