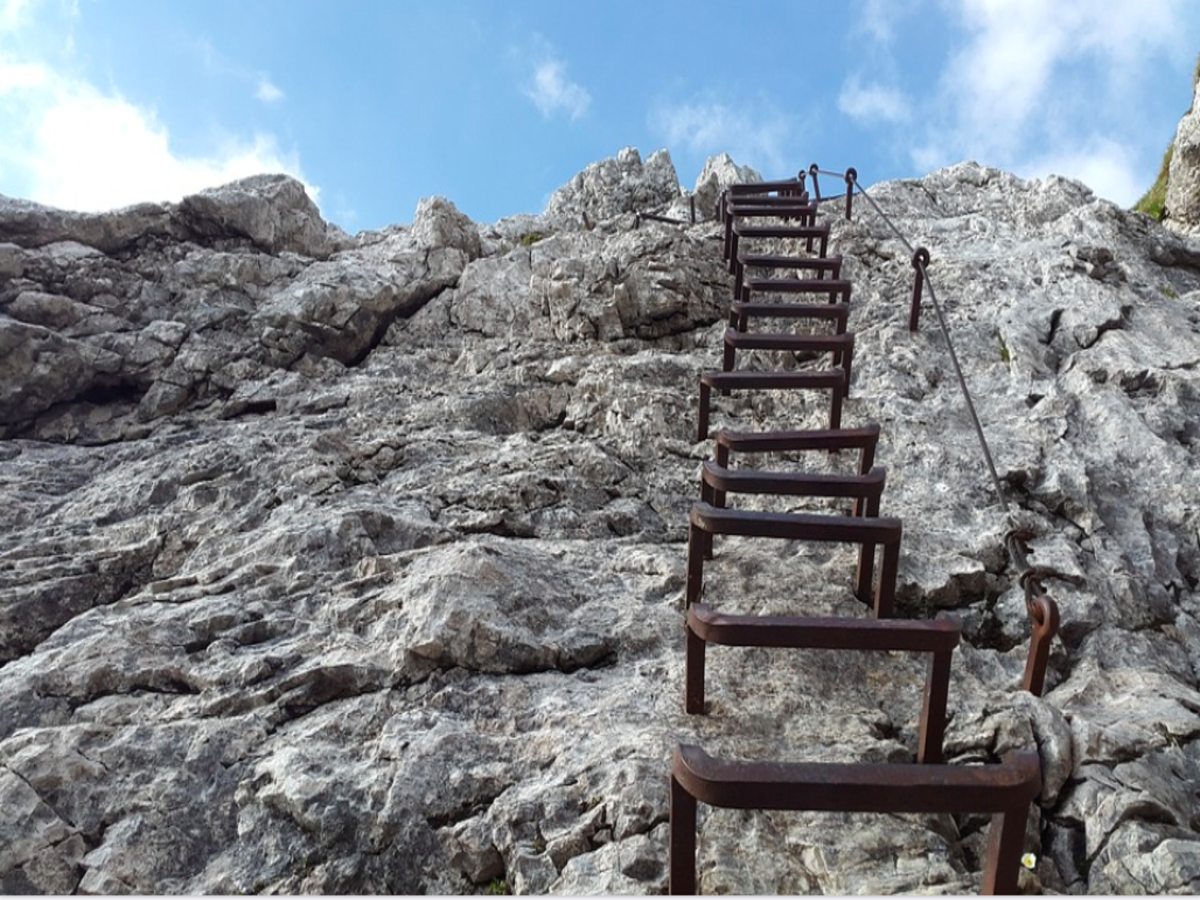 Bitcoin broke above the psychological $60k level less than a week back. Since then, it has already spent a considerable amount of time hovering below the $63k threshold. Even at the time of writing, BTC was seen exchanging hands at $62.4k.

The near-ATH period is considered to be quite tricky for a couple of reasons. First, the coin is usually tested and rejected multiple times at past resistance levels. Secondly, at this stage, most of the HODLers are usually in profit and in retrospect, the incentive to sell intensifies.

As far as the former factor is concerned, Bitcoin has already been rejected at $62.9k a couple of times in the recent past. The latter factor too seems to be gradually playing out now.

At this point, close to 98.34% of coins are held at an unrealised gain. So, to analyze whether or not HODLers in profit have started cashing out, let’s take a peek into the state of the URPD metric. Simply put, the UTXO Realised Price Distribution gauges the distribution of prices at which the circulating supply was last spent.

As per the chart attached below, around 311.8k BTC were last moved at higher prices [above $60.1k]. Notably, the owners of the aforementioned coins held through the turbulent phase over the last few months and exited as soon as they fetched the bare minimum. 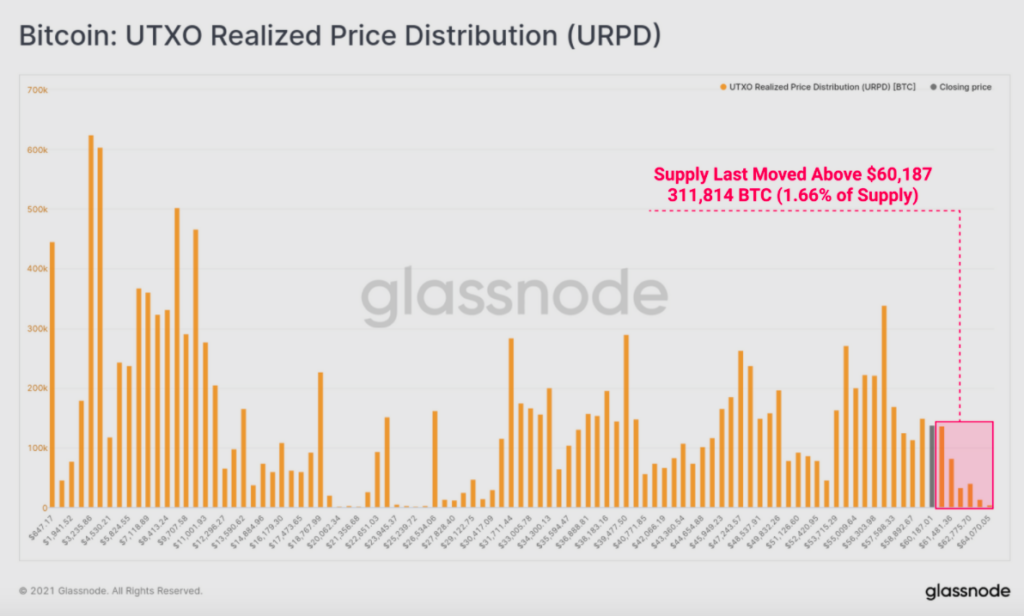 Additionally, over the last 7 days, the LTH net position change metric has started projecting a downward slope on its chart, confirming that long-term HODLer spending has been going on lately.

Usually, long-term HODLer spending coincides with the price breaking above previous highs. Thus, in the coming days as BTC’s price surpasses the $64k benchmark and trades higher, one can expect the selling behavior to prolong.

Further, the coin-days-destroyed also brought to light a similar trend. Whenever this metric notes upticks on its chart, it implies that older coins are being spent in strength. Conversely, a downtrend indicates the slow-spending/accumulation phase.

Over the past week, the CDD has seen an early uptick sign, verifying that more coin days have been destroyed than the long-term average. Having said that, it should also be noted that during most of the recent bull phases, such a trend has been observed and the market has more often than not, been able to absorb the sell-pressure. 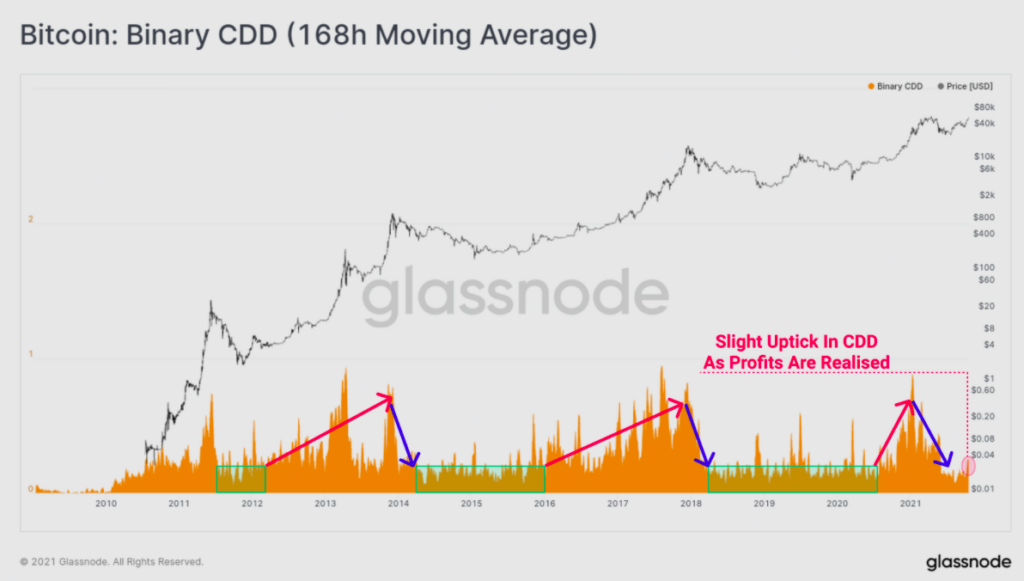 However, at this stage it should be borne in mind that the STH supply distribution has been revolving around its historical low [17%], implying that the market has not yet stepped into “bubble” stage – which is quite healthy.

As per one of CryptoQuant’s analysts, bubbles form when the momentum of short-term returns attracts enough money and the makeup of investors shifts from long term to short term. During such phases, people sort of voluntarily get into short-term participation to reap the benefits of the market’s strength. In effect, after a point in time, the bubble tends to burst.

The same has been observed during the 2013 bull run phase and the 2017-18 uptrend period. Well, there’s a fairly long time left for such a scenario to unfold because new highs have not yet been attained by BTC and FOMO is far from its peak. 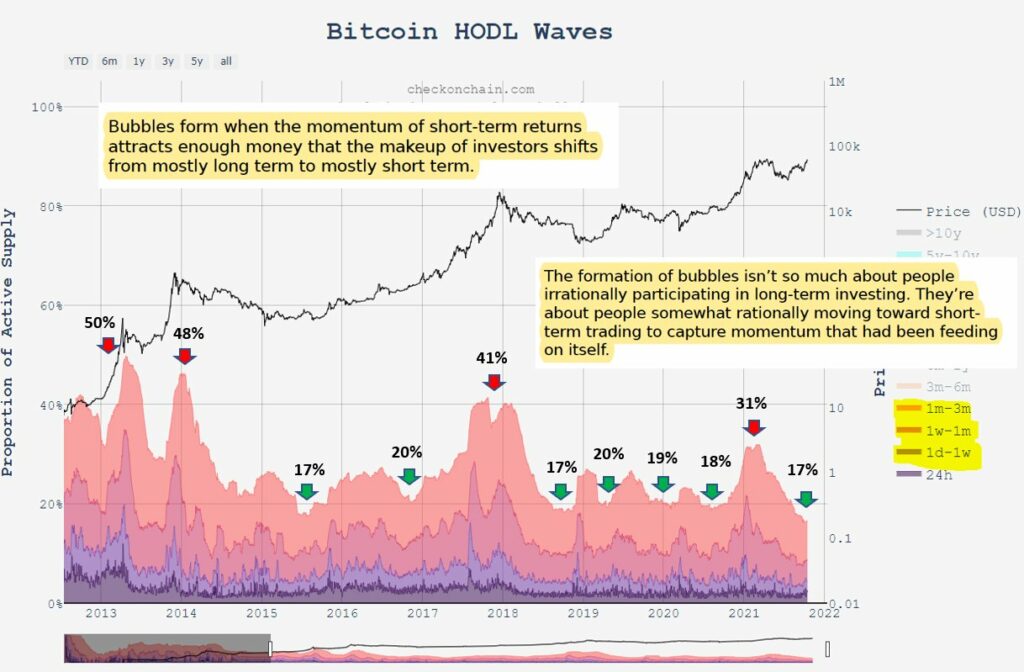 In all, old coins being spent during an uptrend is merely a part and parcel of the investing process and the outflow initiated by a particular gamut would either be absorbed by the market or compensated by fresh inflows in the long run.

This can spur a move to a fresh ATH for LUNA