Whale traders are a commonality with several digital assets, but for Chainlink, it has been like second nature from the very beginning. Over the past couple of years, the digital asset has projected the presence of strong whale addresses. It is understandable then that concerns associated with their activity are never out of the question.

At press time, another such situation seemed to be unfolding in the ecosystem. Ergo, it is time to take it up and analyze its potential implications.

Chainlink‘s performance in 2021 has not been as explosive as 2020, with the asset dropping out of the top-10. However, it has continued to consolidate higher on the charts. Furthermore, at the moment, on-chain activity might be seeing some major movement. 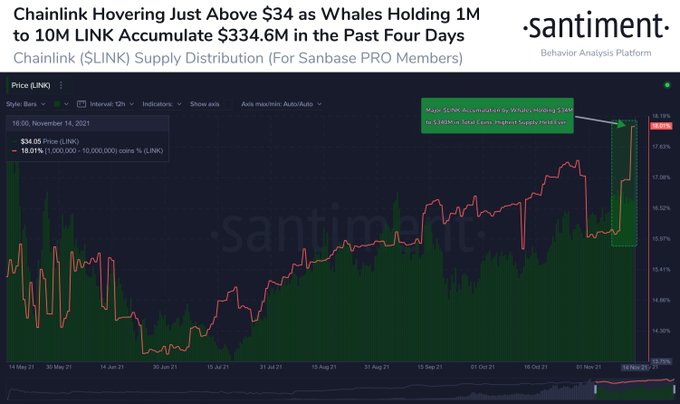 According to Santiment, 64 addresses holding between 1M-10M LINK increased their bag holdings by adding another 1.89% of the circulating supply. As illustrated by the chart, that was worth close to $340 million at press time, with LINK valued at $34.

Additionally, it was suggested that these few addresses now hold 18.01% of the total supply. The fact that such a high number of LINK resides in a few wallets raises the question and the possibility of whale manipulation. On the contrary, however, it might be somewhat unnecessary for LINK’s ecosystem.

LINK & Whales – A match made in heaven?

Unlike most major assets which may succumb to capitulation concerns during whale activity, LINK addresses have been used to such concentrated bag holders since the very beginning. According to Glassnode, the LINK supply of the top 1% addresses rose up to 86% in the ecosystem. What’s more, it has already steadily increased. Ergo, the question – Why shouldn’t traders be worried about manipulation?

One strong reason could be the fact that it hasn’t happened once in the past, at least not yet. Over the course of LINK’s appreciation from $1 to $20 in 2020, whales accumulated the asset in a frenzy. But, it never saw massive dumping, and it continued to consolidate higher on the charts.

Also, these accumulations have been taken forward by LINK communities and projects as well. Especially since more protocols are now building advanced smart contracts with the help of Chainlink’s Oracle Services.

Does that mean it can never happen?

No, that isn’t completely fair to say either. Any asset can fall victim to whale dumping, let alone Chainlink. A massive market crash could pave the way for liquidity across the board, but individually, a market blip for LINK is less likely.

Hence, LINK whales should not be a concern, at least when the market is healthy.

Related Topics:LINKWhale accumulation
Up Next

Assessing the odds of Ethereum Classic eyeing an immediate 13% hike