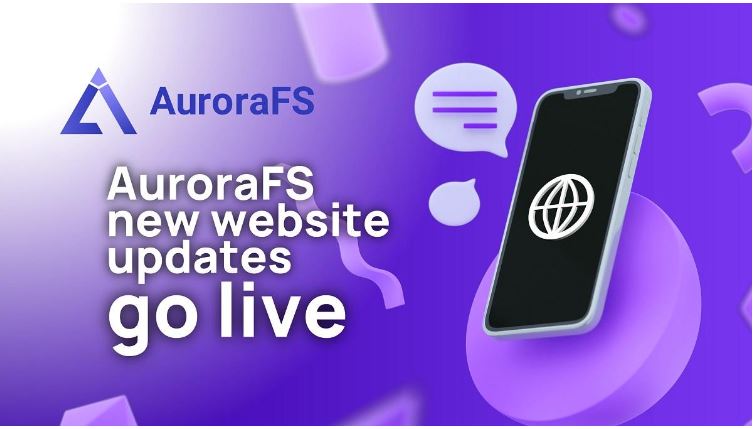 AuroraFS P2P cloud storage and distribution network has released their newly designed website, highlighting the decentralized content network. The new AuroraFS website gives users an enhanced experience in more than one way. The structure of the newly configured interface was based on the idea of increasing the organic flow of the page. For that reason, a much more intuitive design was implemented in developing the attractive new website.

The information presented on the AuroraFS website is expanded and further clarified when compared to the previous version. As another element that enhances the intuitive design, there are clear expectations that this progression will have positive impacts on UX. Specifically, information on the AuroraFS network is laid out in more pages, with expanded insight, presented in a concise and clear format.

Ultimately the new AuroraFS website design offers users an easier time of engaging with the information related to the decentralized project and platform. The reason for the greater amount of technology-related information on the AuroraFS webpage is due to the inner-working components of its vast ecosystem.

It can be stated that the technology in operation for the proper functioning of AuroraFS can be difficult to comprehend for non-blockchain aligned individuals and even those who are familiar with the decentralized finance and crypto industry. Because of this, it was important for the decentralized content distribution network to make the information as digestible as possible for the average browser who may be interested in the opportunities presented on the AuroraFS network, to grasp them as easily as possible.

In order to take advantage of the opportunities presented within the AuroraFS ecosystem, it certainly helps when users are able to comprehend the project proposition with as much simplicity as possible. The newly released website seeks to achieve this effect by presenting users with information, not only in the order which helps to best explain the elements and operation of AuroraFS in somewhat chronological order but also by the expansion of the live web pages included in the new website structure.

Specifically, more pages related to the technology which powers the AuroraFS network were added to the newly existing website. Pages dedicated to the explanation of ant colony optimization, cloud storage, data distribution, metaverse storage, and industry data storage were added in order to explain these important points which are active and relevant within the AuroraFS network.

Direct links to specific AuroraFS developments were also included in the structuring of the new site. Now users will be able to obtain applicable files needed to access broadband mining and other rewarding activities on the network. These links make things much simpler for users who would need to download the latest version of AuroraFS in order to partake and benefit from any one or more network validation or other related activities.

The pre-release of the AuroraFS development – Web3Tube also has a newly placed direct link present on the website for users to download the commercial-grade video content storage and sharing network. Recent activities on Web3Tube were motivated by contests that saw content creators and platform engagers on the AuroraFS network compete for the most likes and subscribers to the new Web3Tube release, which will be released in full, to the public in the very near future.

There were over 1,000 users rewarded with 1-30 AUFS future airdropped tokens, in each of 7 designated rounds that measured the most video likes for users who shared content on the network over the course of the live contest. As another part of the activity-related contests, the top 300 users were rewarded with 5-100 future AUFS airdropped tokens in multiple rounds for their placement in the rankings for the most subscribers to content creator channels.

The new website enables web browsers to download Web3Tube without having to navigate away to find links to do so. Browsers can do so and download real-time, as they read about the first fully decentralized commercial-grade video storage and sharing platform.

Additionally, AuroraFS has expressed the intention to launch the full Web3Tube platform publicly prior to the cryptocurrency deployment. The decentralized video network is a fully developed tool that exposes the capability inherent in the AuroraFS network.

It is a tool that expresses elements of the functionality made possible by the expansive AuroraFS network global data pool, which provides the foundation whereby Web3Tube operates. This is something that can be very helpful for Blockchain and DApps Developers who are looking for networks to host decentralized applications on, with the massive bandwidth, speed, security, and low cost of an alternative such as AuroraFS.

Next steps and Future updates on AuroraFS

As always, news and information is expected to continue to be released to the public as the network grows closer to its launch, and future developments. Twitter and other popular social media channels are regularly updated to inform members of the growing AuroraFS community of all updates in real-time.

The most accurate and rapid information channel for the AuroraFS network would be the community Telegram channel. There, holders and individuals looking into the network are able to often get answers to questions with ease. For any information that may not be made clear to anyone on the newly designed and structured AuroraFS website, those questions, as well as any other questions or concerns can be answered there.