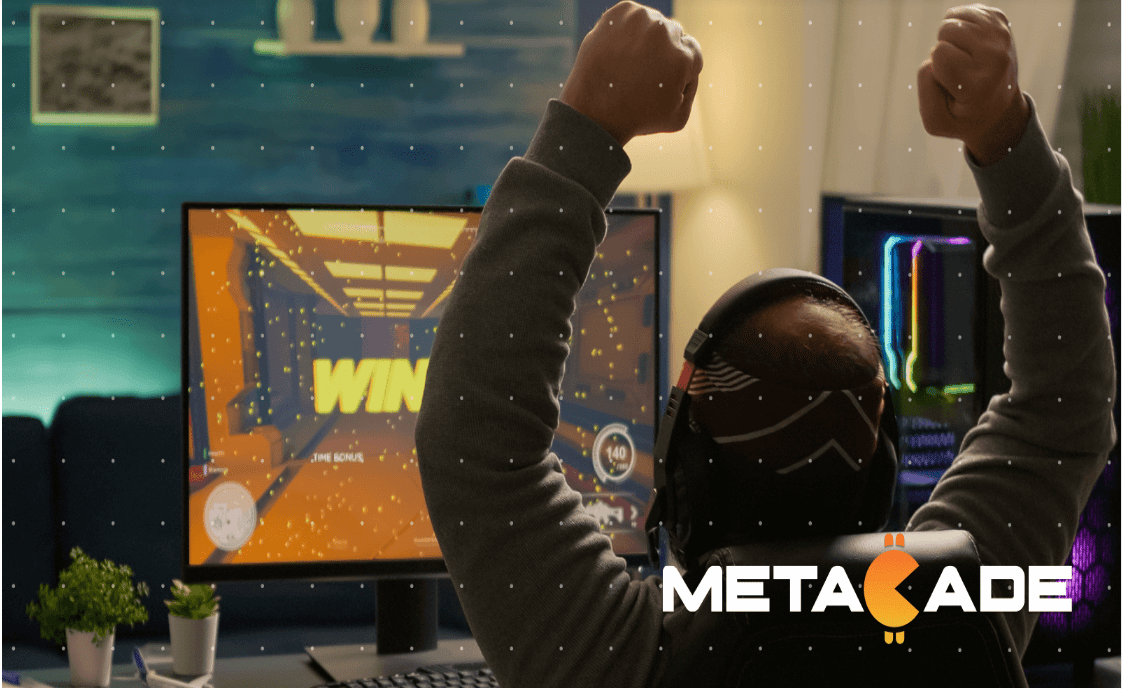 Metaverse gaming is tipped to be the next big trend in the industry, and titles like Axie Infinity have already shown that titles within this sector can quickly ascend to stardom. While it might be too late to get in on the ground floor with Axie Infinity, there are new metaverse gaming crypto projects that could represent fantastic investment opportunities as the industry grows.

One of these projects is Metacade, and in this article, we’re going to discuss why Axie Infinity and Metacade could lead metaverse gaming in 2023.

What is Axie Infinity?

Axie Infinity is a blockchain-based Play2Earn game built on Ethereum. Like Pokémon, Axie Infinity players collect, breed, and battle monsters known as Axies, which are represented by their own NFTs. Players compete in turn-based duels with their team of Axies to win Smooth Love Potion (SLP), a cryptocurrency that can then be exchanged for real cash.

To begin playing Axie Infinity, users need to buy three Axies from the Axie Infinity Marketplace. Here, users can also purchase in-game land and accessories to help start their adventure in the world of Play2Earn. Axies can even be bred and sold for profit – with some Axies having been sold for as much as 300 ETH, worth around $400,000 at the time of writing!

Why Will Axie Infinity Be a Metaverse Gaming Leader in 2023?

Multiple Ways to Earn: Axie Infinity’s Play2Earn model gives players across the globe the chance to profit from its game in multiple ways. Some players prefer the grind of battle – ranking up, rinse and repeat. But others have seen the potential in breeding and selling Axies. When players breed Axies, they develop unique characteristics that might give them an edge in battle. This makes them incredibly lucrative on the Axie Infinity Marketplace.

Other players prefer to rent out their Axies to give others a chance to benefit from them. Users can even make money by investing in land and flipping it later.

A primary source of income for some: According to CNBC, players in the Philippines and Indonesia were able to replace their regular source of income by playing Axie Infinity and other metaverse games during the pandemic. Because of the value of SLP at the time, players that lost their jobs during lockdowns could put food on the table as long as they had a phone and internet. This shows the incredible potential of metaverse gaming to benefit everyone, regardless of economic status.

A Game Owned by the Community: SLP isn’t the only token in the Axie Infinity ecosystem. There’s also Axie Infinity Shards (AXS), a governance token that allows holders to determine the future of the game. By locking up their tokens for some time in a process known as staking, players can determine SLP supply restriction rates, new features, treasury allocations, and more.

Metacade plans to be the ultimate community hub for metaverse gaming. If titles like Axie Infinity are metaverse games, then Metacade is the place where users go to find them. It’s where players will go to meet up, earn money, and give their input on the future of Web3 and metaverse gaming.

At its core platform is an all-in-one platform that emphasizes user value at every step. Users are rewarded for contributing to the community with the MCADE token, whether they review Play2Earn titles, share valuable tips, or test the latest metaverse games. This encourages the community to grow and build Metacade into the ultimate repository for everything Web3.

This is just the start, however. Metacade has plenty of disruptive ideas that could lead it to become one of the hottest metaverse gaming crypto tokens on the market.

How Will Metacade Rise to Become One of the Top Metaverse Gaming Projects of 2023?

Linking Gamers and Developers: There’s an increasing disconnect in today’s video game market. Game studios are frequently putting out sub-par games fueled by Pay2Win and microtransactions because they focus on profit, rather than players. Metacade wants to solve this by giving the nascent metaverse gaming industry direct access to what their players truly want.

It aims to do this in two ways: by creating an environment where players can easily give developers feedback on their prototypes and Metagrants. Metagrants provide funding for game developers that win competitions as voted for by the community, leading to only the best games being created that genuinely reflect what the gaming community wants.

Work and Play on the Same Platform: As mentioned, users can earn rewards by contributing to Metacade. But part of Metacade’s roadmap for 2024 is to launch a job board where gamers can earn even more by working in their favorite industry. Whether looking for one-off or part-time testing opportunities or starting a career with some of the biggest names in metaverse gaming, Metacade will be the platform that gets you there.

Letting the Community Spread its Wings: At the heart of Metacade’s core philosophy is real community ownership. That’s why it has plans to turn Metacade into an independent decentralized autonomous organization (DAO) that governs itself. Like Axie Infinity, users will be able to stake their MCADE tokens to vote on the future direction of Metacade. Community members will be given leadership positions to give Metacade its chance to function as the world’s first player-owner virtual arcade.

Should users invest in Axie Infinity or Metacade?

It wouldn’t be unreasonable to describe Play2Earn and metaverse gaming as somewhat of a gold rush – a flood of people entering a new, lucrative field. As the saying goes, “When everybody is digging gold, it’s good to be in the shovel business.” To apply this analogy to these two metaverse gaming crypto projects, Axie Infinity is the gold, and Metacade is the one selling the shovels; Metacade is giving users the resources to go out and find the gold.

In combination with Metacade’s ideas around user value and plans for the future, it seems like MCADE could be one of the decade’s best investments to take advantage of the exploding potential of Web3 and metaverse gaming.

Users can participate in the Metacade pre-sale here.