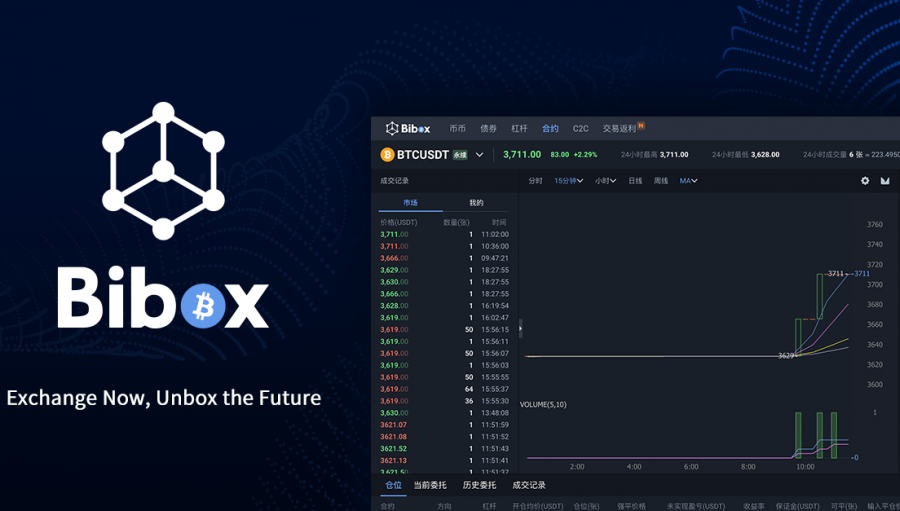 The cryptocurrency ecosystem has witnessed integration with major technologies since its inception. Despite being in its formative years, the cryptocurrency exchanges have significantly evolved. A promising platform in the cryptocurrency ecosystem is – Bibox.
Bibox
Bibox is an AI-enhanced digital exchange that leverages an advanced distributed cluster system which can seamlessly accommodate over 2 million users in its platform. Bibox’s unparalleled UI promises to drive around $775 million in trading volume during the past 24 hours. To top that, Bibox boasts an impeccable error tolerance which in turn would enhance security for its investors as well as for the platform.
Powered with Artificial Intelligence, Bibox serves a trading assistant by delivering quantitative algorithms conveniently for individual investors.
Bibox selects high-quality crypto-assets to trade at the secondary market, thus, eliminating foray of fraudulent entities, such as scam coins, on its platform. The Bibox whitepaper cited,

“Our mission is to provide investors an exchange platform full with transparent, neutral and fair.”

BIX Token
Bibox’s native token, BIX, is an all-new ERC20 based token steering its way to ICO on the Ethereum blockchain. Currently, the total supply stands at 262,971,747 BIX. The current circulation amount is 122,971,747 BIX.
Bibox Platform will render discounts for its users to pay their transaction fees with BIX tokens. In the 1st year, a discount rate of 50% will be offered. In the second year, the rate will be cut to 25%. Subsequently, with each passing year, the rate will be reduced by half and after the fifth year, there will be no discounts for users.
Incentive Reward for the Biboxers every Friday
In a bid to encourage users on its platform, BIX upgraded its feature of incentive reward. According to the latest announcement, 30% of the transaction fee incurred will be shared according to the one-week average locked amount percentage. The Incentive Reward will be distributed every Friday at 5:00 P.M. Only “Locked BIX” are eligible for BIX Incentive Reward. The upgrade further stated that the locked and unlocked amount has to be the integer of 500BIX and the reward will be rounded to the last four decimal places.
Profitable and hassle-free trading at Bibox’s platform
Buyback implies that the virtual currency is doing well which raises the value of the cryptocurrency.  In the case of BIX, there will be no increase in the issuance of the token above its set limit of the total supply. Bibox further plans to take 25% of net profits per quarter to buyback and burn BIX Token. A “token burn” implies “destroying” a certain amount of cryptocurrency tokens in an effort to lower the number of existing tokens in circulation in the market.
Buyback, essentially, means that a company is reducing the number of crypto-assets available in the market. The value of assets repurchased is then distributed among the remaining tokens on the market and the tokens held by the investors. And as supply reduces, demand for the asset shoots up. This signals both profit for the investors as well as an organic increase in the value of the token.
It is important to note that the investor tokens are not at the risk of getting eliminated while performing a buyback by the issuer of the tokens. Buybacks are quite hassle-free as there are no added regulations or tax making it lucrative for the token holders.
BIX Token Burn and Repurchase
BIX holders will be able to enjoy 30% of the transaction fees as part of the upgraded token incentive rewards. Only those who have bought BIX on Bibox trading platform are eligible for BIX incentive rewards. The total burning amount accounts for 8,548,602 BIX. Total BIX burned accounted 7 million tokens after the fourth quarter of the scheduled repurchase and burn session in 2018.
The BIX token “buyback and burn” figures since its inception are as follows:

According to Bibox’s profitability, the team will repurchase and burn 1,509,044 BIX worth tokens in the first quarter of 2019. Additionally, the incentive rewards poured in this quarter is 4,643,212 BIX.
In the latest announcement, Bibox team stated,

“We will continue to increase BIX applications and reward events to feedback Biboxers with solid actions for your support and encouragement.”

The team also elucidated that the repurchase is forecast to be concluded by 1st May 2019 [GMT+8] following which the exchange platform will issue the burning completion announcement. Bibox had announced significant development in the recent past.
The cryptocurrency trading platform has diversified its operations across Bibox expanded its footprint in the U.S., Switzerland, Canada, China, South Korea, Japan, Singapore, and Vietnam. With a solid foundation, Bibox aims to create value for its user base and has been quite successful in achieving the feat at a steady pace.
BIX token is now available for purchase at Bibox, DEx.top, Huobi, ChainX, Kyber Network, and CoinPlace.
For more details contact BiBox via Telegram-CN, Telegram-EN, and Telegram-KR.
Bibox also has a presence across Twitter, Facebook, Reddit, and Youtube.

Can Sharding solve the public blockchain scalability problem? Elrond believes It can!

How to protect users assets on a blockchain – The Nebulas approach