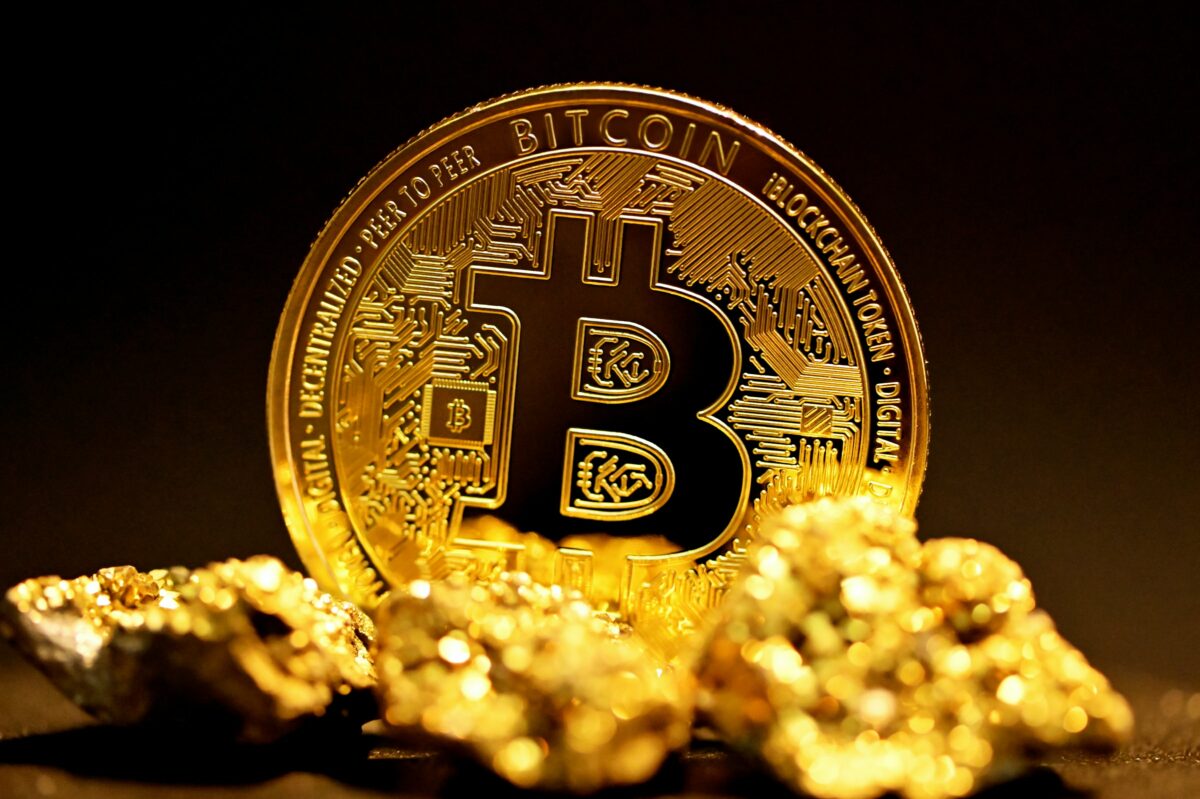 A few days ago, the United States Bureau of Labor Statistics released their numbers for the Consumer Price Index – Or in other words, the inflation rate. The report observed that the annual inflation rate in the U.S accelerated to 6.8% in the month of November 2021 – The highest since the June of 1982. This also marks the ninth consecutive month inflation has stayed above the Federal Reserve’s 2% target.

Now, it must be noted that this comes amid a global rally in commodity prices, rising demand, wage pressures, supply chain disruptions, and a low base effect from last year. All of these factors have contributed to pushing the prices up. Here’s how the scenario has been worsening since the beginning of this year.

Now, one may wonder how the traditional “inflationary hedge” has been playing out.

Take a look at how Gold Futures in the U.S COMEX have performed since the beginning of the year, for instance. 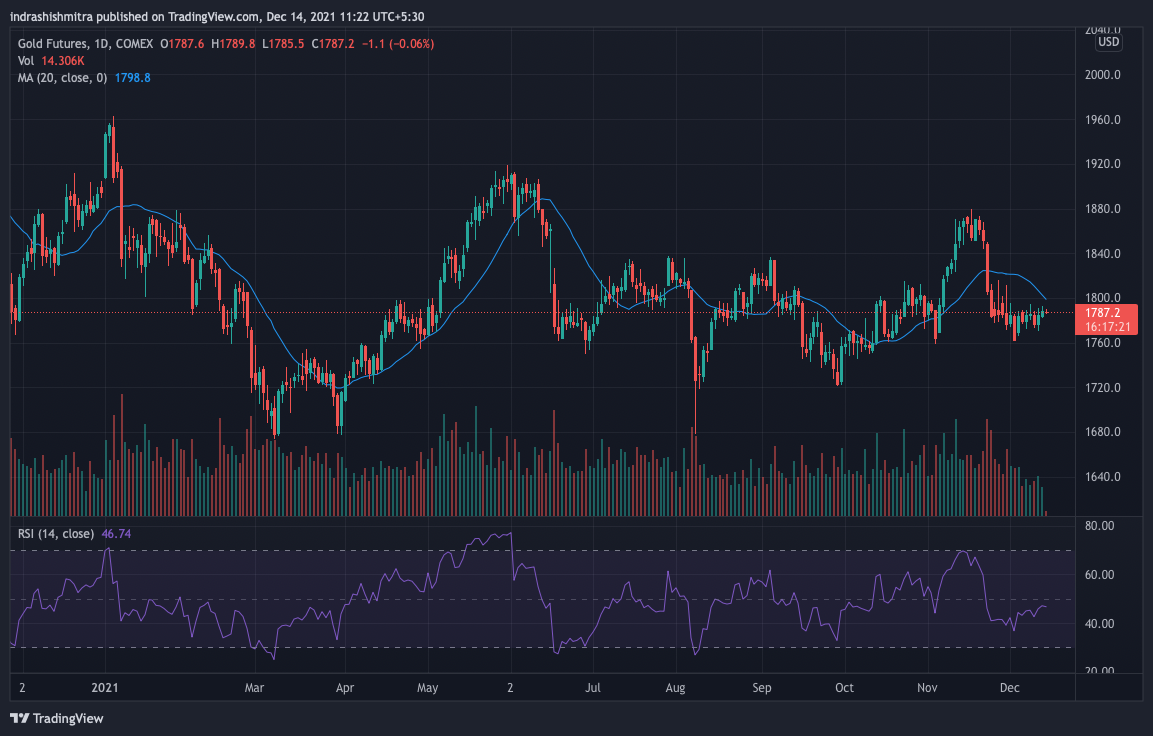 From the above, it is pretty obvious that the precious yellow metal has also not performed as it should have to battle rising inflation. It has stayed pretty much confined within the $1700 to $1950 range only. Historically, gold has been a savior during tough times, but that cannot be said in the current situation.

Bitcoin to the rescue?

Now, let’s pay some attention to the “new age inflationary hedge” aka Bitcoin. In recent times, crypto-analysts have touted this as the more efficient inflationary hedge of modern times. It has, no doubt, performed extraordinarily well since its inception. Probably, no other asset class in history has provided returns of this remarkable magnitude.

In fact, since the beginning of the pandemic, with the Fed printing trillions and trillions of dollars as a means to support the economy – Bitcoin has had a whirlwind of a run-up. However, a slightly narrower look at its 2021 performance wouldn’t instill a lot of confidence in it. Especially after this time’s CPI data. Take a look. 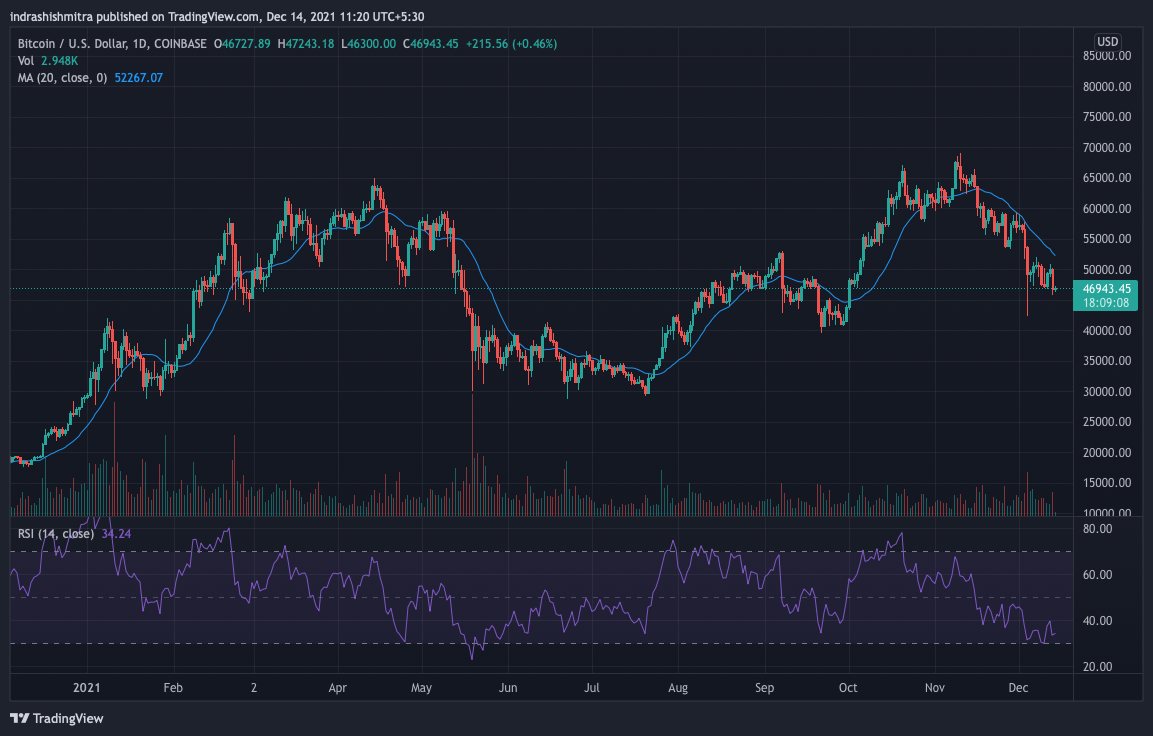 It is pretty evident that even Bitcoin hasn’t been able to perform positively. Investors who bought Bitcoin towards the beginning of November have lost nearly 30% of their invested capital.

On the contrary, it was supposed to save people’s money when fiat currencies depreciated in value. So, it can be safely said that neither of these hedging assets has been working well.

Bitcoin’s proposal for the future may be a compelling one. The dream of a currency that isn’t controlled by a handful of people, a currency that cannot be printed whenever required to bail out a certain few individuals or institutions. It’s a very idealistic dream to be honest, at the moment. Bitcoin and other cryptocurrencies in the market right now are still largely being used as a means of speculation and trading.

One can bet their top dollar, most people who are buying into cryptos don’t yet dream the same dream. All they are looking for is a way to double their money in a matter of weeks, preferably days with the likes of those dog-themed coins. There are some HODLers, but their intentions are very unknown and ambiguous.

However, despite that – the dream isn’t completely unlikely either. At the rate at which Bitcoin is gaining ground and mass appeal, a part of the dream may be realized sooner rather than later. If enough institutions and economies move towards Bitcoin and use it as a store of value, much like gold, it will become more stable. But, one must understand, there’s a long way to go.

Gold is really still king despite its saddening under-performance this time around and many experts agree. According to Steve Land, VP, Research Analyst, and Portfolio Manager at Franklin Equity Group,

“While gold is valued for a variety of reasons, the uncertainty and economic fallout tied to the COVID-19 pandemic saw investment drive the price of the yellow metal to record highs in 2020.”

He agreed that many gold market analysts are speculating that Bitcoin might be replacing physical gold in the minds of certain investors as an inflationary hedge. However, Land also said they view it as a pipe dream, so to speak.

“However, we see significant differences in the way many governments view and treat cryptocurrencies compared to gold, and we certainly see government regulations as a major risk factor that does not exist to the same degree for gold given the long history and central banks’ heavy involvement in the gold market.”

Let’s look at it this way. Gold‘s market capitalization today is close to $11.363 trillion. Bitcoin, however, has a market capitalization of just close to $900 billion. That means gold is close to 13 times bigger than Bitcoin right now. To effectively act as an inflationary hedge, it must have a particular characteristic – To retain or increase in value at times when there is a depreciation in the value of a currency. Simply put, less purchasing power.

Let’s take a look at how gold performed in a year against the Dow Jones Industrial Average the last time the world saw a major crash. 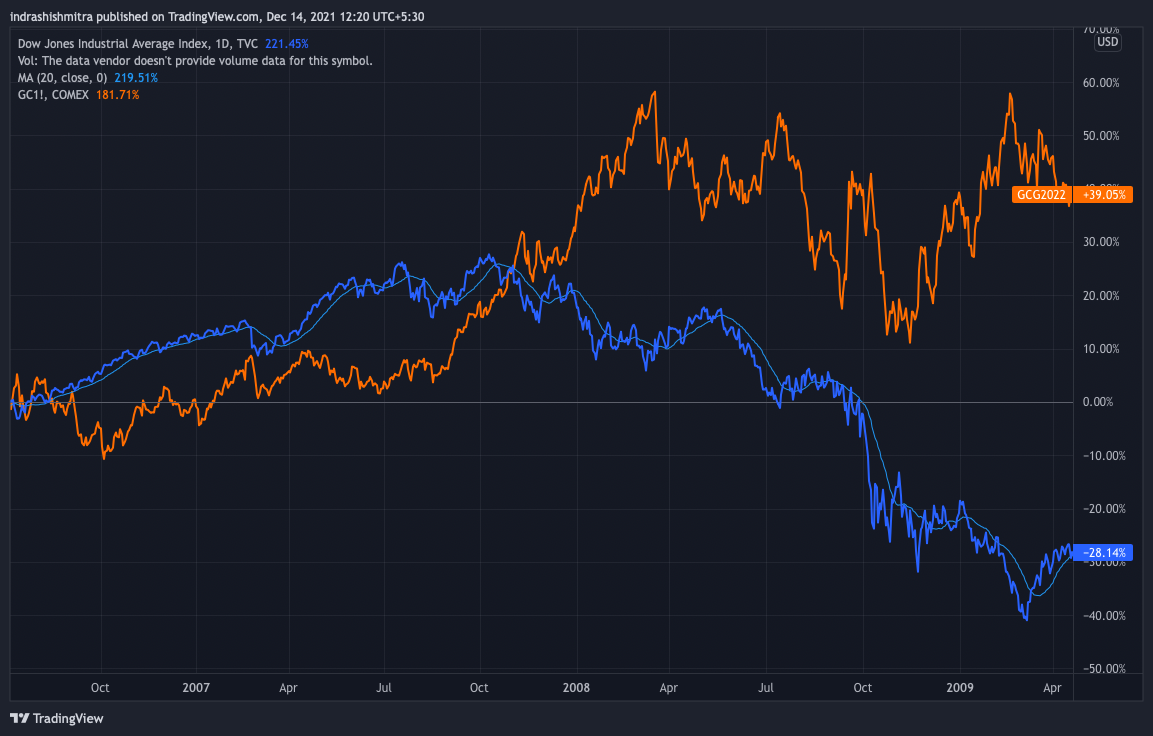 Gold has seen a rally of over 45% since the August of 2007 at its peak (demarcated in orange) while the Dow Jones Industrial Average was wiped out by nearly 55% over the same time period (demarcated in blue).

However, fast forward to today, Bitcoin has rallied to the stratosphere since the pandemic. 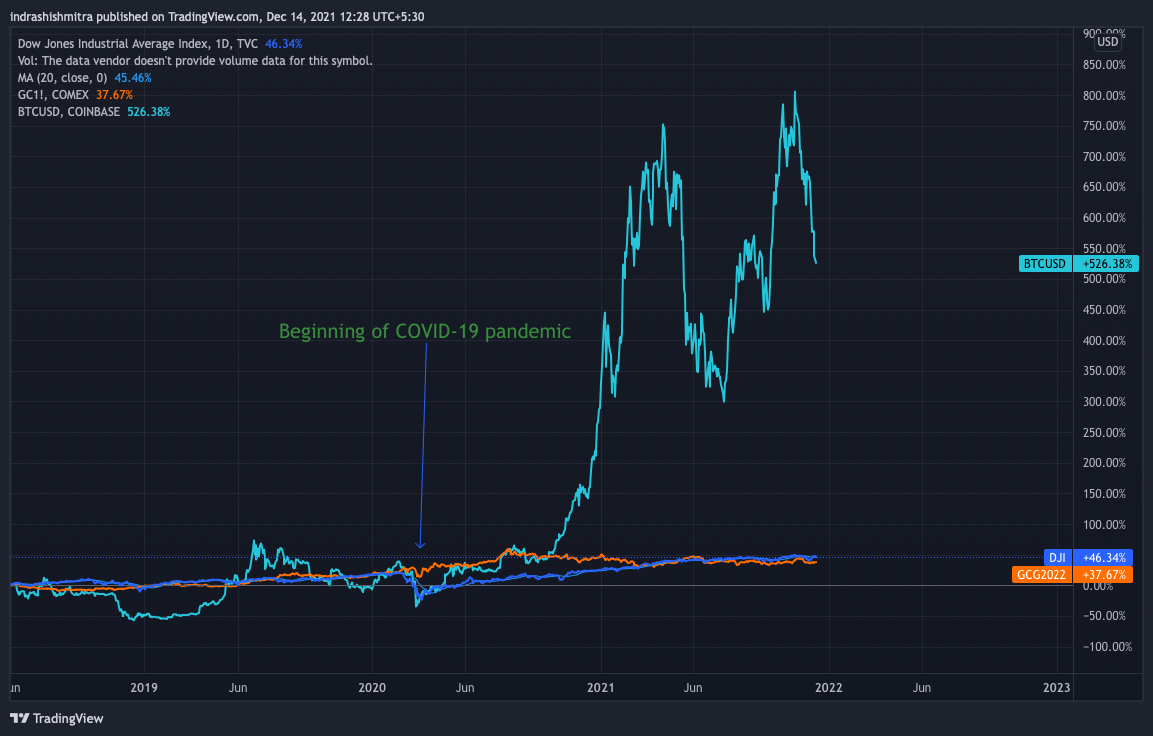 Yeah, even a stratospheric rally would be understating it. However, one needs to take a closer look before jumping to buy Bitcoin today. In the middle of the month of March 2020, when the DJI lost nearly 35% of its value, Bitcoin shed nearly 52% from its high over the same time period. This itself goes against the basic tenet of a so-called “inflationary hedge.”

During times of crisis and very high inflation rates, a “hedging” asset is supposed to rise, or at least retain its value when everything around is crumbling. Gold performed the last time around too. But, Bitcoin didn’t. However, since then, Bitcoin has managed to scale up by 800% at its peak – Nothing short of extraordinary.

Why is Bitcoin underperforming now?

During times of high inflation rates, investors and traders are looking for safer havens to park their money – like gold. That is why, despite the consistent increase in CPI since the beginning of this year, at press time, it is back to where it was around February of this year.

Gold has been stuck in somewhat of a range and there are a few macroeconomic reasons behind this. Thanks to the COVID-19 pandemic that has ravaged the world and still is – the demand for the precious yellow metal has been lackluster.

People want to save their wealth for more important things pertaining to health and financial security. Take a look at this infographic, for instance.

Nearly 47% of all mined gold is used in the form of jewelry. Now, due to the pandemic, that demand for jewelry has naturally come down to a large extent and understandably so. Also, since gold is virtually indestructible, this means that almost all of this metal is still around in one form or another.

However, gold still has the scope to rise. Here’s why –

Roughly about 54,000 tonnes of gold are yet to be mined, so there is a finite supply. Each year, global gold mining adds approximately 2,500-3,000 tonnes to the overall above-ground stock of gold. While gold production has shown an upward trend in recent years, this is likely to level off in the coming years.

This would directly result in rising prices of gold in the long term thanks to scarcity and increasing difficulty in mining. Also, as the economic effects of the pandemic begin to wear off, demand will also see a gradual rise. So, there is still a lot of scope.

So, should we chuck Bitcoin out altogether?

Again, that isn’t the best idea. Bitcoin’s promise as a store of value and an alternative form of currency is definitely worth something. And from the looks of it, the future looks bright too. As adoption becomes more and more mainstream in today’s digital financial world, its value is going to go up in the future, no doubt about that.

Gold might save your money from being devalued, but Bitcoin has the potential of multiplying it at an exponential rate.

So, at the moment, the best kind of investment portfolio should have both gold and the “digital gold” in proportion to the individual’s risk capacity.

Bitcoin: Miners, HODLers remain bullish, but will that be enough