In its latest version, V7.0.8, BitKeep has released a major feature: InstantGas, which enables its users to swap tokens without having any native tokens. Currently, tokens on Tron and BSC can use InstantGas.

What is gas fee?

Whenever we make a transaction with crypto wallets, we must always pay a sum of “gas fee”. It’s just like the blockchain counterpart of the banking service fee.

When we make cross-chain transactions, we need to pay the gas fee with the native token of the source mainnet. Dealing with different mainnets requires different native tokens. For example, when trading on BSC, you may want to have some BNB ready; when it comes to Polygon, you need some Matic. For users new to the blockchain world, it can be hard to understand; and for veterans, it’s no picnic either.

Entering the multi-chain world, users dealing with more than one mainnet in their everyday life, which required them to buy some different native tokens, and withdraw the tokens to their respective wallets in order to make transactions on the mainnets or access the DApps in their respective ecosystems. In this way, every time you try to explore a new mainnet, you need to get hold of some of its native tokens. Not before long, you may find that there are a lot of different native tokens which cost you time and money.

“We hope to further simplify the transaction process for users so that the token swaps on the blockchain are made safe, reliable, and easy.” said Kevin, BitKeep CEO, “BitKeep has always been committed to solving the key problems in blockchain transactions, providing users with the smoothest token swap service.” Currently, BitKeep Swap supports the token swap between any two of 220,000+ tokens across 55+ mainnets.

Swap with other wallets VS swap with BitKeep 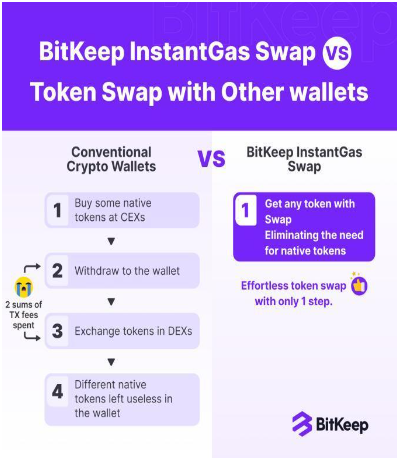 BitKeep has launched InstantGas to make the cross-chain journey earlier for all crypto users. Instead of getting native tokens like TRX, BNB, or Matic in advance, just tap to choose the token you want, and tap Swap, you’ll see it’s readily done. Even if you have only some USDT in your wallet, you have nothing to worry. With InstantGas, a sum of USDT (or other token you have) will be deducted as gas fee when you are making a transaction. Won’t that save a lot of time and efforts for you?

With other wallets, if you only have some USDT on Tron and would like to get some TRX, well, you simply cannot. You need to buy some TRX, the native token of Tron, in advance, so that you can pay for the gas fee when making a transaction.

With BitKeep Swap, you can use USDT on Tron to swap for TRX or any other tokens on Tron of your choice, such as Sun, BTT, etc.

BitKeep V7.0.8 and above supports InstantGas token swap for tokens on TRX and BSC. The feature of InstantGas for other mainnets is in development now and will be released in the coming weeks.

Footprint Analytics grows funding to $4.15M in seed plus round