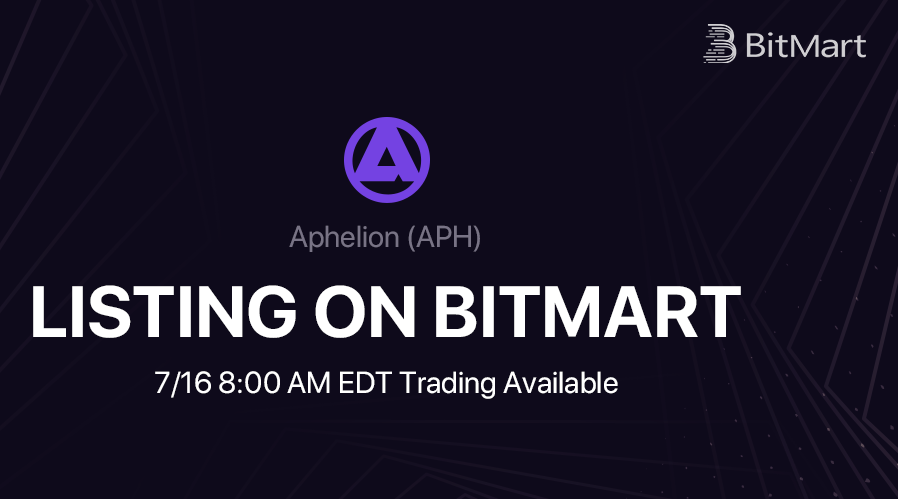 BitMart Exchange, a premier global digital asset trading platform, recently announced the listing of Aphelion Token [APH]. APH/BTC trading pair is available starting at 8:00 AM EDT on July 15th and the trading feature is available on July 16th.
Aphelion is a P2P trading platform [DEX] built on the NEO blockchain that brings a wallet based peer-to-peer trading experience to cryptocurrency traders worldwide. It was the 2nd ICO on NEO back in November 2017 and has been an incredible development across 6 platforms. In requiring APH to power the trades, the unique Aphelion ecosystem allows a commit of the token for sharing fees, making significant contributions to core NEO code over its 2 years’ history.
Acting as a digital escrow, APH tokens represent a new breed of digital asset distribution. The Aphelion token simultaneously captures terms from buyer and seller, reconciles the proposed smart contract, instantly verifies liquidity and settles the DEAL. The APH tokenized DEAL is a protocol DApp residing directly on the blockchain, thus bypassing exchanges and allowing APH to be the Liquidity Verification Device and ultimately unlocking the promises of instant, secure and total decentralization.
Currently, Aphelion’s wallet and DEX only support NEO Nep5 based assets. However, with a pending release to integrate both BTC and ERC assets, this situation is changing. Along with a fresh UI update due by Earth Aphelion Day on July 6th, 2019, Aphelion has an aggressive roadmap forward towards achieving its mission and vision.
According to Sheldon Xia, Founder & CEO of Bitmart:

“We are delighted to list APH on our exchange, the Aphelion solution allows users to trade cryptocurrency in a decentralized and trustless environment which also coincides with BitMart’s mission.”

About BitMart
BitMart Exchange is a premier global digital asset trading platform in the cryptocurrency market with over 700,000 users worldwide and ranks among the top 8 crypto exchanges on CoinMarketCap. BitMart currently offers 231 trading pairs with a relatively low trading fee in the market.
To learn more about BitMart, visit their Website, Twitter or join their Telegram.
About Aphelion
Aphelion is a wallet based DEX built on the NEO blockchain with over 50,000 thousand users worldwide and has an exceptional product ecosystem with a bright future. Aphelion will update its UI, integrate BTC and ERC into their wallet, and will ultimately release revolutionary atomic swap technology into their suite of products.