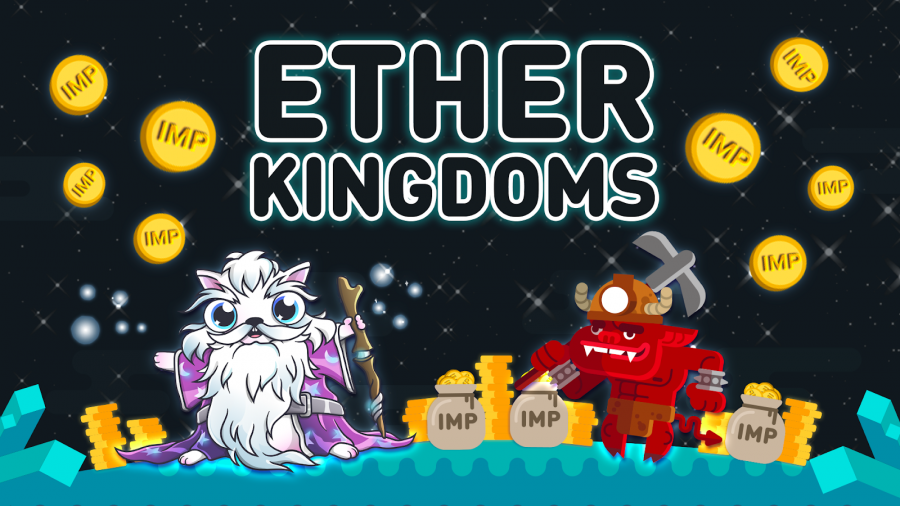 Blockchain once thought of nothing but an ambitious experiment has grown far more than ever predicted. Since its inception as Bitcoin’s underlying technology, it has spawned numerous projects in practically every industry and sector.
Gaming, a multi-billion dollar industry, is not far behind. A sector that is fueled by the latest in hardware and software, the adoption of the decentralized technology has already begun.
Blockchain Battles: Ether Kingdoms
Out of the hundreds of blockchain projects that are being launched, few have any significant financial or social impact. Ether Kingdoms, with its visually appealing graphics and full gameplay, intends to make its mark.
The game consists of ‘Imps’, a user army that is represented by their native token, also called Imp. Users fight it out on the digital battlefield, pitting their Imps against each other. Imps in the battlefield are set apart from their enemies’ by being equipped with secondary tokens, called Artifacts. Artifacts are unique ERC721 standard tokens that grant powers and increase stats, turning the tide of the battle.
PoS, Free 2 Play, And Tokenomics
The token generation event is a funding scheme that most blockchain projects use to raise capital. Ether Kingdoms departs from that practice by letting players earn their tokens instead of buying them. Using Proof of Stake, players can use what tokens they possess to stake and earn up to 1% of the mining profit.
This creates a challenge since only a limited number of tokens are given out in the Free 2 Play concept. Users are granted only 10 Imps in the start and they have to build their army from it. Players can either battle or stake their coins.
Imps can also be acquired on MercaTox and Forkdelta exchanges, while Artifacts are tradeable within the gaming platform. 9,750,000 out of 13,000,000 Imps will be mineable and out of these, only 350,000 will be given to starters (free tokens). This means that not only are the tokens limited, but the armies are too.
Beta Testing and Future
Ether Kingdoms recently successfully completed its beta testing, and has announced future modes in the game as development continues:

During the latest round of release, Ether Kingdoms developers have added over 25 artifacts and more than 120 levels of gameplay. The game also features loot boxes that contain rare stuff and quests.
CryptoKitties Integration
Perhaps one of the game’s most unique attributes is the integration of CryptoKittes tokens. These ERC 721 standard tokens have already made rounds in the news, and owners of these unique kittens will be able to integrate them in the Ether Kingdoms game.
By 2019, Ether Kingdoms will also be available to players on mobiles. The mobile version will include complete game functionality, except token support due to restrictions by mobile store policies.
For more information on the blockchain battle game, visit their website.