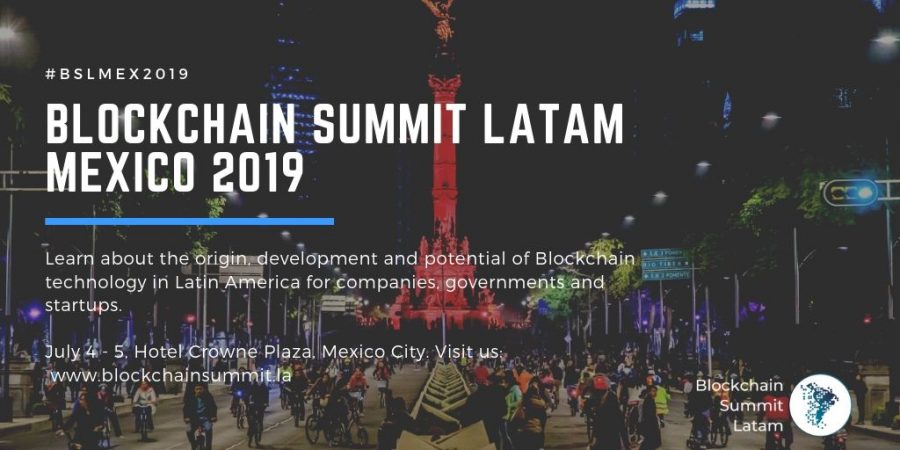 Mexico City will have the most important event in Latin America around Blockchain and Cryptoassets technology, bringing together more than 50 high-level speakers in 2 days full of information and knowledge.
Only in 2018 the Blockchain market in Latin America had sales of around 500 million dollars; In this ecosystem, the country has positioned itself as a booming sector with great potential to continue growing, for this reason and in order to gather and exchange information on this matter, more than 50 expert speakers will meet on July 4 and 5for the 2019 edition of the Blockchain Summit Latam, which this time will be held at the Crowne Plaza Hotel in Mexico City.
The event organized by mifutu.ro, a company focused on developing blockchain solutions, including Godzillion and Purplex; and by Hyperblock, an organization that seeks to accelerate the adoption of technology in Mexico and Latin America will focus on 4 main pillars: companies, government, regulators and startups.
Cristóbal Pereira, organizer of Blockchain Summit Latam and CEO of mifutu.ro, stated,
“This congress was born in May 2018 in Chile and attended by people from all over the Latin American continent to discuss Cryptoassets and Blockchain, which helped strengthen the Blockchain ecosystem in the country. Months later, there was a second version in Bogotá, Colombia. In total we managed to impact more than 1,500 people and have more than 48 hours of didactic material on Blockchain technology, all available on our website.”
For his part, Carlos Valderrama CEO of Hyperblock said that Mexico has been selected to host the Blockchain Summit Latam, since it is one of the countries in Latin America where this technology has been developed and adopted very quickly, as it counts with more than 80 companies within the ecosystem and is the first country to issue a Fintech Law in Latin America that includes the regulation of Cryptoassets.
According to a study led by Endeavor, the global blockchain market is expected to have an annual growth rate of 42.8%, which will result in a global income of 13.960 billion dollars by 2022. On the other hand, a recent report, made by the Market Reports Center, predicts that the size of the market will reach 60.7 billion dollars by 2024.
In its two previous versions, the Blockchain Summit Latam brought together more than 45 speakers, with extensive international experiences, such as Chris Burniske, author of Cryptoassets; Meltem Demirors, renowned investor of Cryptoactives; Eric van Miltenburg of Ripple; as well as Juan Llanos, Elena Giralt, Alex Preukschat, among others.
In this third version, the Blockchain Summit Latam Mexico hopes to gather more than 600 people who, through a series of talks, panels and workshops, will be able to learn about the origin of this technology, the adoption that exists in Latin America, the ecosystem, the applications that show real cases of business use as well as startups, also the impact of blockchain technology in the region.
We hope to have more than 50 speakers among which are Sophia Lopez [CEO Kaleido], Juan Llanos, Alex Preukschat, Luiz Sacco, Elena Giralt, Federico Ast, Pablo Gonzalez, among others.
The event has 2 days, the first one is focused on technical aspects of technology, such as origin, evolution, protocols, applications, and tokenomics. In addition to the above, workshops will be offered on Ethereum, Hyperledger, NEM, Katun, among other protocols. For the second day, the focus will be on the business side, with cases of use, adoption from the public sector, regulation and the impact on the generation of the crypto assets.
In addition to the above, the event will feature a Hackathon with the objective of allowing companies to present challenges to 100 developers who, after 18 hours of continuous work, will present solutions to these challenges, using Blockchain as the basis for development. The winner will receive prizes and the possibility of continuing the development with the sponsoring company.
From these hackathons organized by Blockchain Summit Latam have left 2 cases of use, Rental4me and HealtChain.
Why attend the BSLMEX2019?
We bring together the main Latin American and World benchmarks around blockchain technology, applications, development, business, regulations and other matters, who present their vision on the ecosystem and potential of the region on Blockchain and Digital Assets.
Whether you are a developer, educating newcomers, implementing within your organization or disputing purchasing industries, this event is for you. You will conceptually learn the basics of technology, you can build your business network, and above all, you can get down to work.
Quotes:
Diego del Olmo of Hyperblock, said,
“Clearly this is the most important Latin American event about Blockchain, and we expect high-level assistants and the main decision-makers in Mexico interested in these issues.”
Carlos Valderrama, Hyperblock stated,
“From Hyperblock we are proud to meet our challenge to accelerate the adoption of technology in Mexico and Latam in the hand of such an important event and the collaboration so relevant with mifutu.ro.”
Cristóbal Pereira, Executive Director of Blockchain Summit Latam and CEO mifutu.ro, remarked,
“Mexico has a tremendous potential to become the benchmark of the Blockchain ecosystem in Latin America, has a very advanced venture capital funds industry, good level of developers, a tremendous market and, above all, companies and startups with a lot of interest in knowing more about the Blockchain technology and its implementation, is what we will see in the BSLMEX2019.The focus of our event is to bring the use of Blockchain technology to companies, startups, governments, and regulators, show them the potential and encourage their use, all through a series of talks, panels, workshops and hackathon that bring the event to life most important around Blockchain technology in Latin America.”
The sale of tickets Early Birds ends this Sunday 19, which have a 50% discount. You can purchase it directly at our official website, and from Monday 20, the Pre-Sale will begin with a 25% discount.
Social Networks Links
Redes Sociales:
Facebook
Twitter
Linkedin
Instagram
Youtube
Hashtag: #BSLMEX2019

After the Wild West, the Next Generation of Crypto Companies are Advancing the Industry

What is EIP 1973 and how can it Impact Decentralized Applications?