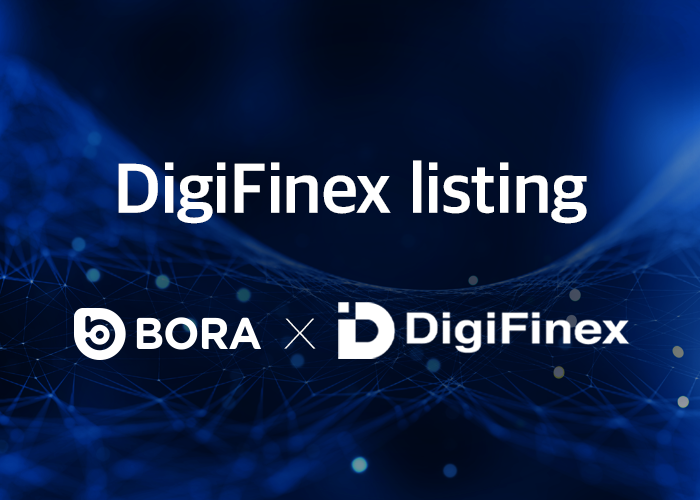 Blockchain digital contents platform project ‘BORA’ has announced the listing of their in-house Ethereum based token: BORA.
DigiFinex is a company based in Singapore founded by blockchain technology experts from well-known IT firms such as Tencent, HP, Baidu and Xunlei. Currently, the firm acts as one of the major exchanges, maintaining a high trading volume as Top 10 worldwide, according to the Coinmarketcap Adjusted Volume.
The BORA token, on DigiFinex, can be deposited at 11:00 AM (UTC+9) on the 6th, and can be traded and withdrawn from 11:00 AM (UTC+9) on the 7th through the exchange.
Blockchain digital contents platform project ‘BORA’ is a Dapp platform aiming to eradicate the existing industrial complications, distribute games and digital contents whilst increasing user participation through its double blockchain structure and independent token mechanism.
BORA is collaborating with its partners to enable BORA token to be used in a variety of different blockchain based services whilst continuing their efforts of listing in major international and domestic exchanges.
Currently, BORA is collaborating with more than 30 partners, from well-known gaming companies such as 433, ENP games, Neowiz games, Unit5, Supertree, Emong games, Pier.6. To companies from other industries such as Greenwood Networks [real estate], Wisepeer [music], Huray [medical], RS EDU Consulting [education], Infoseed [maps], in order to create an ecosystem that enables blockchain contents to be consumed in real-life.
Furthermore, BORA has received investments from Kakao games, which enabled a partnership with Kakao’s blockchain project Klaytn. The partnership aims to collaborate on a variety of projects such as technical research on synchronization of BORA platform to the Klaytn main net, which is currently being developed.
Following the roadmap, BORA service has opened its Beta version currently and is undergoing through the final process before the official release in the second quarter of 2019. BORA’s representative Cindy Lee puts an emphasis on the possibilities of BORA platform and its token,

“BORA token was created specifically for real-life situations with its core values being Practicality and Usability.”

“BORA token which is being listed on exchanges, will be used as the method of consuming a variety of digital contents such as games, music, web-toons, education and medical, and also purchasing and selling.”

Further details can be found on BORA ecosystem homepage or on BORA Medium.

Crypto contradictions: how regulations are moving adoption in Brazil