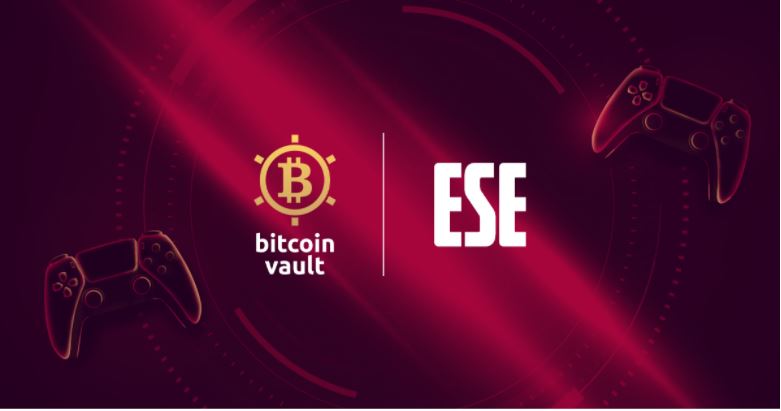 The esports and cryptocurrency industries have both separately experienced exponential growth in the past few years, but both worlds are now starting to come together. One of the most recent examples is a partnership between the innovative crypto, Bitcoin Vault (BTCV), and ESE Entertainment, a major player in the competitive gaming arena.

Bitcoin Vault is a cryptocurrency based on the SHA-256 algorithm and built with user security as a priority. Through the innovative 3-Key Security Solution, it offers users the possibility of reversing unauthorized or accidental transactions. The BTCV team has been working hard in recent months, expanding its ecosystem whenever possible. The most recent development is a move into the dynamic gaming and esports industry – a logical step, considering both the crypto and gaming markets.

Following its rapid growth, esports now needs a universal currency to sustain its dynamic rewards system, increase its market exposure, and enhance overall security. BTCV is the tidy package that solves all of these issues.

BTCV users enjoy the convenience of Bitcoin combined with transparency and freedom to reverse transactions. ESE Entertainment operates in an industry that registered a global revenue of USD 947.1 mln in 2020. That figure is expected to almost double by 2024. A BTCV and ESE Entertainment partnership makes sense at every level.

When visiting the ESE Entertainment website, one finds a company focused on bridging Europe, Asia, and North America. This bridge recently became a little more complete. Together, BTCV and ESE Entertainment are scheduled to launch a talent show in China, Japan, South Korea, Vietnam, and Brazil.

It is called “The Gaming Show,” a sort of X-Factor for gamers and is a big deal for them. China, South Korea, and Japan are three of the top five markets by game revenues. Additionally, the two partners will be organizing a series of esports tournaments in those countries.

Nasdaq believes this is the key to the mass adoption of blockchain and crypto in the world of esports. For BTCV, there is a push to integrate with games, tournaments, and esports teams that already have an audience.

If you want to understand why this partnership is so mutually beneficial, consider the nature of rewards. Both industries are built on the distribution of compensation. Crypto miners are rewarded for the time it takes to solve a mathematical problem. Gamers are rewarded for successfully crossing a battlefield, building a metropolis, or winning the Champions League.

BTCV provides users with functionalities like remittances, reversible transactions, payment settlements, and cross-border transactions. Both online gaming and blockchain technology connect people all around the globe. They can all build upon this union of ideas.

BTCV and ESE Entertainment’s operational cores are virtually identical. Their partnership brings them closer to their unified goals.

Game studios maximize user engagement by creating add-ons. Gamers often have access to an archive of modifications, including outfits, weaponry, maps, and assistance. Users complete in-game tasks and receive fictional coins, which can be used to shop in the archive.

There is a readymade economic system in esports and gaming. The industry can be easily monetized by substituting a game’s fictional coins for cryptocurrencies. Thanks to the limited supply of most cryptocurrencies, prices increase as more people buy the coin, which benefits those who bought their coins earlier and chose to hold on to them.

Crypto’s impact on the virtual world and beyond

Cryptocurrencies like BTCV are transforming industries everywhere. Today’s payment solutions are almost unrecognizable compared to those of only a decade ago. A 2020 study by Forrester Consulting found that up to 40% of customers that pay with crypto are new to the merchant. The same survey showed that crypto purchases were, on average, double the billing amount of credit card transactions. Crypto could drive a similar number of new users to esports.

Online crypto marketplaces like SuperRare and OpenSea utilize non-fungible tokens (NFTs), which are data units that mark digital assets as unique. This enables them to verify ownership of items ranging from vintage cars and sports memorabilia to art and antiques. This same technology will make it possible for gamers to own collectibles that were previously always owned by the game producers.

NFTs can also facilitate esports prize transfers for the most successful gamers. Some of the world’s greatest gamers are now multimillionaires. For example, Dota 2’s The International is an annual championship that  will feature a prize pool of USD 40 million in 2021. Gamers from all over the world will flock to Stockholm, Sweden, to take part. This means cross-border transactions could be necessary. Cryptocurrency is a safe and quick way to send large amounts of currency around the world.

Privacy and the security of personal data are of the utmost importance in the healthcare sector. Blockchain technology has revolutionized health information exchanges (HIE), making them more secure, efficient, and interoperable. But the security of personal data is also a concern for gamers. Applying the same processes to esports will provide users with the peace of mind they desire.

Other partnerships in the esports industry

Players in both industries are beginning to recognize the value of this cross-industry collaboration. A Norwegian esports organization, Nordavind, found its partner in Norwegian Block Exchange (NBX). Together, they are introducing cryptocurrency-focused bonus and loyalty programs for players, payment portals, and tournaments.

Esports betting company Unikrn announced a strategic partnership with FYX Gaming in March. They are working together to deliver CryptoFights, a game that will use historical match data from esports to create a continuous stream of content alongside live betting markets.

Following in the same vein, Cloudbet has launched an esports vertical that allows players to place in-play bets with digital currency on games such as CS:GO and FIFA 20. Global esports revenue is expected to increase by USD 533,6 mln this year. That is significantly more than the USD 137 mln increase in 2020. The pandemic and the resulting practice of working from home appear to be responsible for a great deal of growth.

By partnering with ESE Entertainment, BTCV joins the list of esports and blockchain joint enterprises.

Tyler “Ninja” Blevins was working in a fast-food restaurant in 2009. Today, the 29-year-old American earns an estimated USD 1mln per month by streaming his gameplay on platforms such as Twitch and Youtube. Perhaps because it is so popular, national institutions are driving grassroots growth by offering degree courses and scholarships in esports and gaming.

The point is that gaming is big business. The global esports market was valued at USD 1.1 bln in 2019, a figure that is expected to have a yearly growth of 24.4%. But now, by incorporating the contemporary innovations of cryptocurrency, this rapid rise is set to become meteoric.

When considering the popularity of esports, the social component of live streaming and gaming cannot be underestimated. Michael Jordan, Drake, and DJ Marshmello are just a few of the celebrities making esports the growing phenomenon it is today. But gamers are becoming celebrities in their own right.

In September 2018, “Ninja” Blevins told CNN he earned almost USD 10 million in 2018, a feat he achieved by streaming himself playing Fortnite on Twitch and posting videos on YouTube. In 2020, the number of live channels simultaneously broadcasting increased by almost 70%. Live streams of Fortnite, Dota2, Counterstrike: Global Offensive, Overwatch, and League of Legends tournaments are often the top trending videos on popular platforms.

Blevins’ fame results from the global uptake of mobile devices, their applications, and their unbroken connection to the internet. Additionally, the world has seen the increased adoption of advanced gaming technologies, consumers’ entertainment preferences, rising levels of income, and growing demand for mobile gaming.

Blevins currently has almost 7 million followers on Twitter and 14 million on Instagram. This makes him an influencer, a man with millions of people keen to follow in his footsteps. And with universities now offering an education in the field, many students see gaming as a viable career option.

The world of esports offers global brands the kind of exposure they yearn for. The set-up is the same as in any other sport. By sponsoring the events and players, brands can reach new audiences. For the players, one-to-one sponsorship deals can net them even more revenue than tournament success.

Brands from outside the world of gaming are now keen to capitalize on the sponsorship revenue enjoyed by industry insiders like Intel and Nvidia. Spectators at gaming tournaments will now notice brand placements from Volkswagen, Daimler AG (Mercedes Benz), Nissan, McDonald’s, Tinder, Vivo Communication Technology, AT&T, Coca-Cola, and Nike.

Blockchain and esports endeavors are very similar. Merging the two industries is a no-brainer. Soon, the world might look at esports companies without blockchain infrastructure the way people now look at smartphones without cameras.

The technological landscape is constantly shifting, making it necessary to strike while the iron is hot. With this partnership, both BTCV and ESE Entertainment will expand their ecosystems and explore uncharted terrain together.

ABEYCHAIN 2.0: The introduction of decentralized File Storage with Hybrid Consensus