Axie Infinity’s AXS token retraced below $15 in the first week of July after a brief rally towards the end of June. Its latest performance has been characterized by ranging price action, indicating a lack of directional price pressure.

AXS’ current predicament suggests that investors are currently going through a phase of uncertainty. As a result, AXS lacks enough bullish pressure to push it out of its current range. The price seems to have dropped low enough to create a new price floor just above $13. However, there is one key observation that might aid AXS’ long-term price action.

Tapping into Origin for the next growth phase

One of the reasons why investors might have some uncertainties regarding Axie Infinity is the network’s fading hype as compared to 2021. Fortunately, the Axie Infinity team has demonstrated their commitment to the project through their latest offering called Origin.

Seeing an influx of new @AxieInfinity Origin content creators and streamers lately, not to mention the number of people that are jumping in the Origin craze!

This is the way. pic.twitter.com/BPQBbLigPz

Axie Infinity is banking on Origin to maintain healthy activity in its ecosystem. However, it is still too early to tell if this approach will help usher in the next growth phase. AXS’ current support level seems to be holding well. Failure to gain enough traction might potentially lead to a retest of sub $10 prices. On the other hand, a decent rally might potentially bring more confidence to investors. AXS traded at $14.37 at press time after tanking by 4.55% in the last 24 hours. 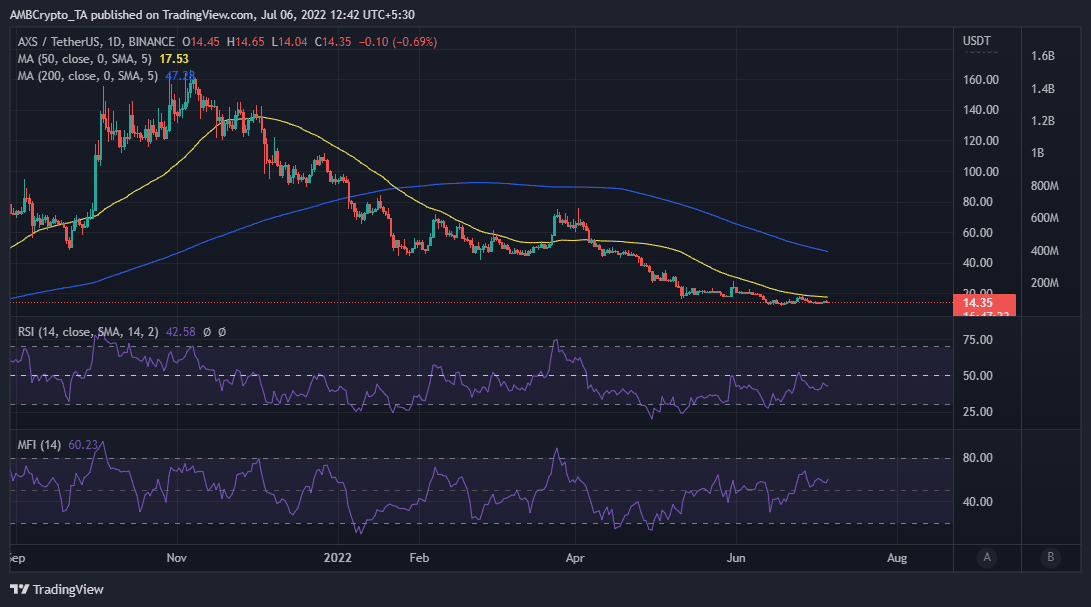 AXS’ Relative Strength Index (RSI) has been struggling to push back to the 50 level while the Money Flow Index (MFI) indicates significant outflows since the end-of-June rally. Those outflows align with a sharp uptick in transaction volumes on 28 June, which peaked at around $1.7 billion. In contrast, AXS’ daily transaction volume has averaged less than $20 million since the start of July.

The active addresses metric also registered a sharp rise in daily active addresses. They increased from as low as 333 addresses on 28 June to 621 addresses by 29 June. Addresses have since dropped to 455 by 5 June while daily transactions on the same date averaged $13.67 million.

Is the latest uptick a sign that AXS has bottomed out?

The daily volumes increase and active addresses uptick happened when AXS was retracing after a brief rally. A surface outlook might suggest a selloff but a closer look at address balances might provide more clarity. AXS supply distribution by balance on addresses reveals that addresses holding more than 10 million AXS increased their balance from 70.38% on 28 June to 70.51% by the next day.

AXS in the works…

The above observation means addresses controlling a large amount of AXS have been accumulating in the last 30 days. It also aligns with healthy network growth during the same period. Although this is a good sign for the bulls, there is still risk of another selloff if the market faces more FUD.