Cardano [ADA] has traded within the $0.2530-$0.2682 for the past 10 days. The sideways structure restricted investors from making meaningful gains as volume and volatility remained low.

Similarly, Bitcoin [BTC] traded sideways in the same period, with $17K being a significant resistance. BTC’s sideways structure has restricted the rest of the altcoin market from moving forward, ADA included.

At press time, ADA was trading at $0.2633 after a retest of its immediate resistance at $0.2682. Given the BTC’s restriction, ADA could drop lower to retest the lower boundary of its trading range.

Will ADA’s price movement continue within this range? 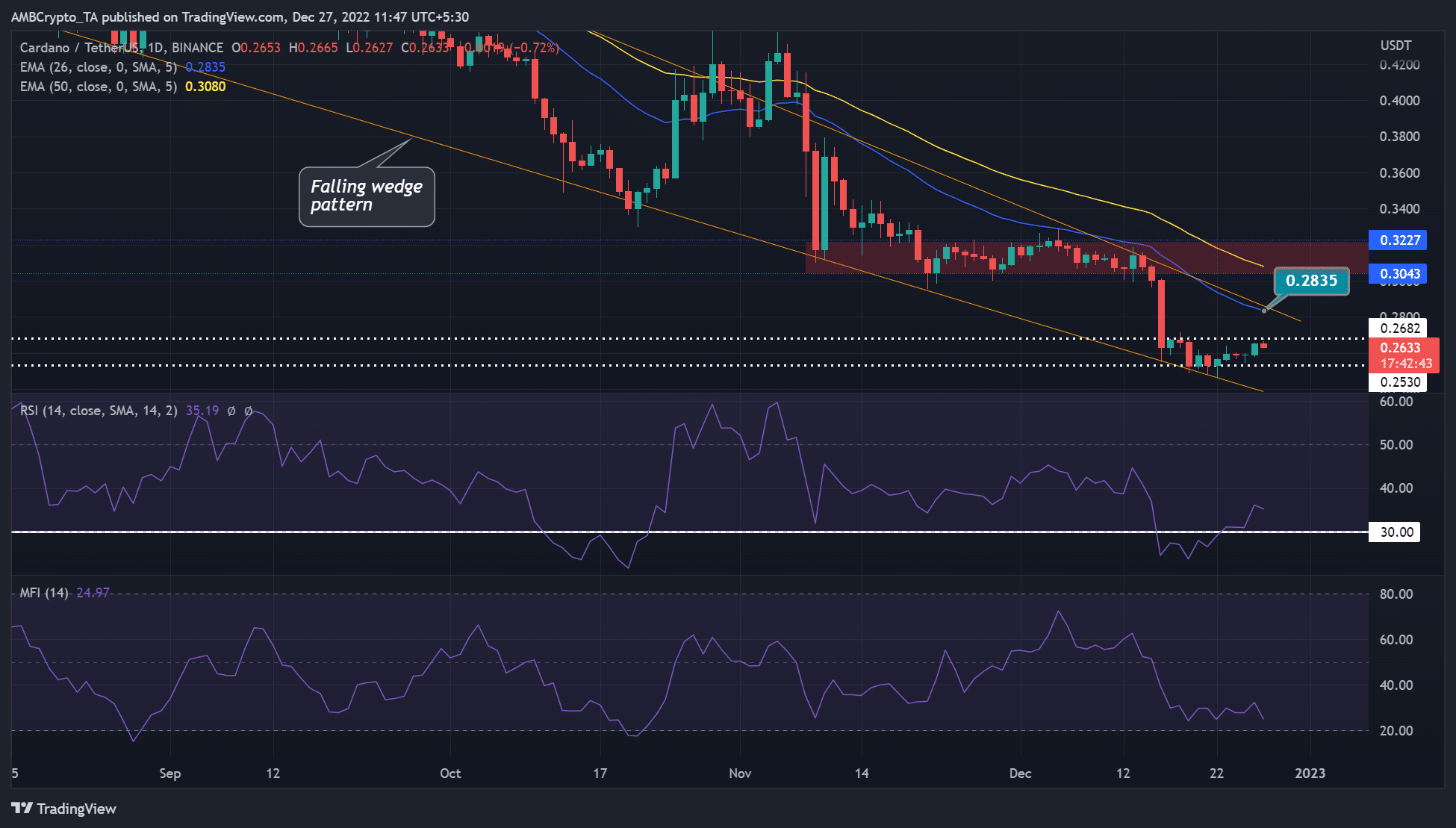 ADA has been in a downtrend since August, forming a three-month falling wedge pattern. It dropped from about $0.56 to $0.26, shedding about 50% of its value within three months.

The Relative Strength Index (RSI) broke above the 30-mark, indicating that buying pressure had increased. However, the Money Flow Index (MFI) moved within a range but dipped by the time of publication, suggesting that distribution (selling pressure) increased slightly.

Therefore, RSI could retest the 30-mark or break below it if selling pressure intensified. That could force ADA to further trade within the range, hence dropping to retest the range’s lower boundary and support at $0.2530.

However, if RSI targets the midpoint at 50, ADA will break above $0.2682, invalidating the above bearish forecast. But such a bullish move will need ADA bulls to clear the obstacle at 50-period Exponential Moving Average (EMA) of $0.2835 to gain leverage.

Here are the whales behind ADA’s selling pressure

At press time, two major ADA suppliers’ categories showed a downtick – those who own 1-10M and 100K-1M coin holders. The downtick showed the distribution and subsequent selling pressure. These two suppliers collectively control about 25% of the supply volume.

Nonetheless, the category with 10M-100M ADA coins showed an uptick; thus, they opposed the selling pressure from the above two groups. Given that this supplier category control about 40% of the supply, could they inflict a price reversal?

Cardano stands out on the dev activity front; can ADA live up to the hype