Bitcoin [BTC] has surprised many market participants over the past week as it posted an impressive 22% rally. Ethereum [ETH] led the bull party.

After reaching its month-long range lows, Ethereum rocketed northward by nearly 55% to touch $1630. Like Ethereum, Cardano [ADA] also bounced from just beneath its range lows.

However, Cardano was unable to pierce past the mid-range resistance. At the time of writing, a revisit to the range lows was a possibility for ADA. 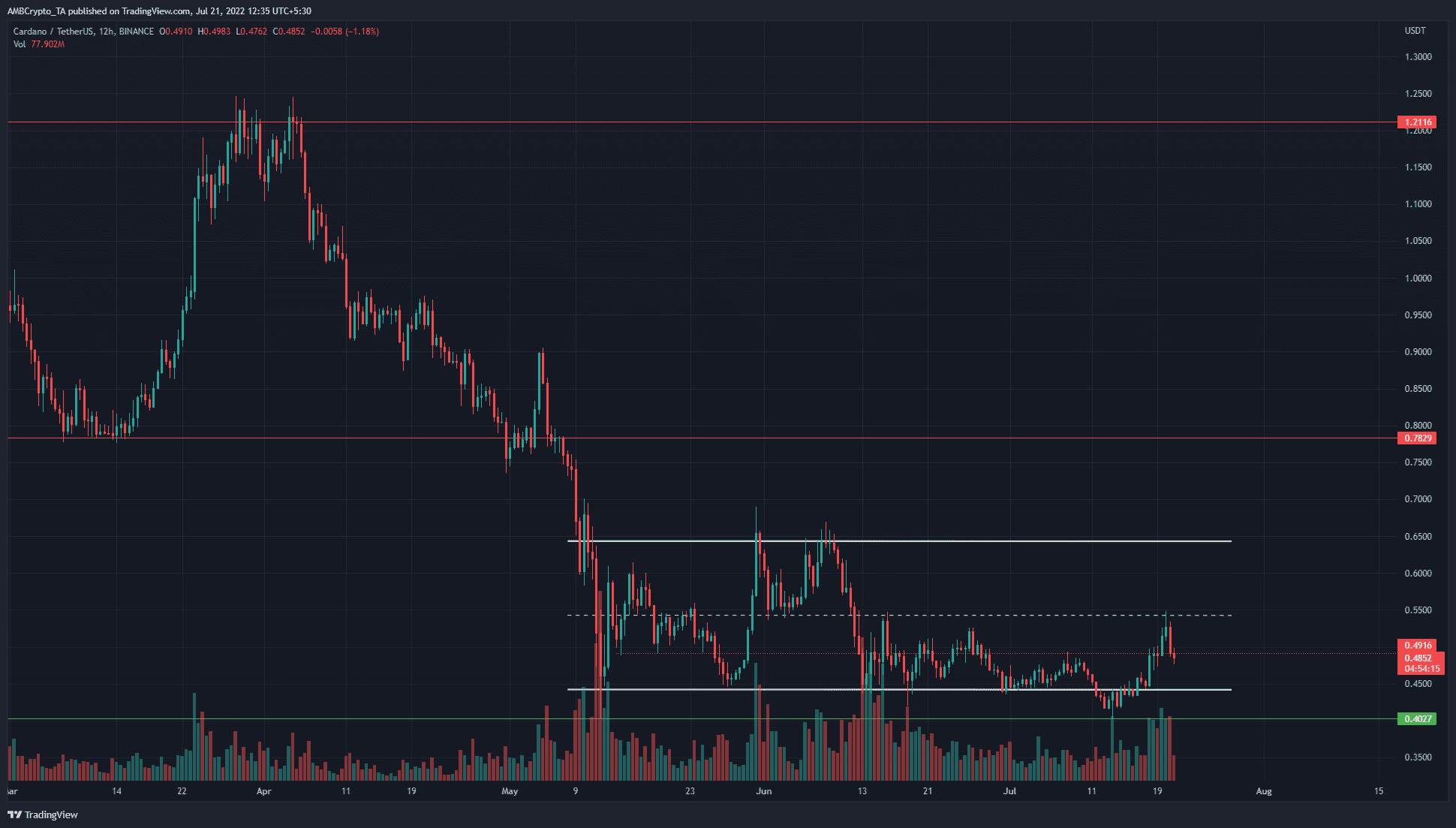 The 12-hour chart showed a clear range for Cardano from $0.44 to $0.64, highlighted in white. The mid-point of the range (dashed white) lay at $0.54. A week ago, ADA dipped below the range low and appeared to retest the same as resistance.

However, this turned out to be a short-term bear trap. The prices quickly bounded higher following the bullish impetus of the leaders Ethereum and Bitcoin.

This momentum could fade somewhat as both coins reached their respective higher timeframe resistance levels. 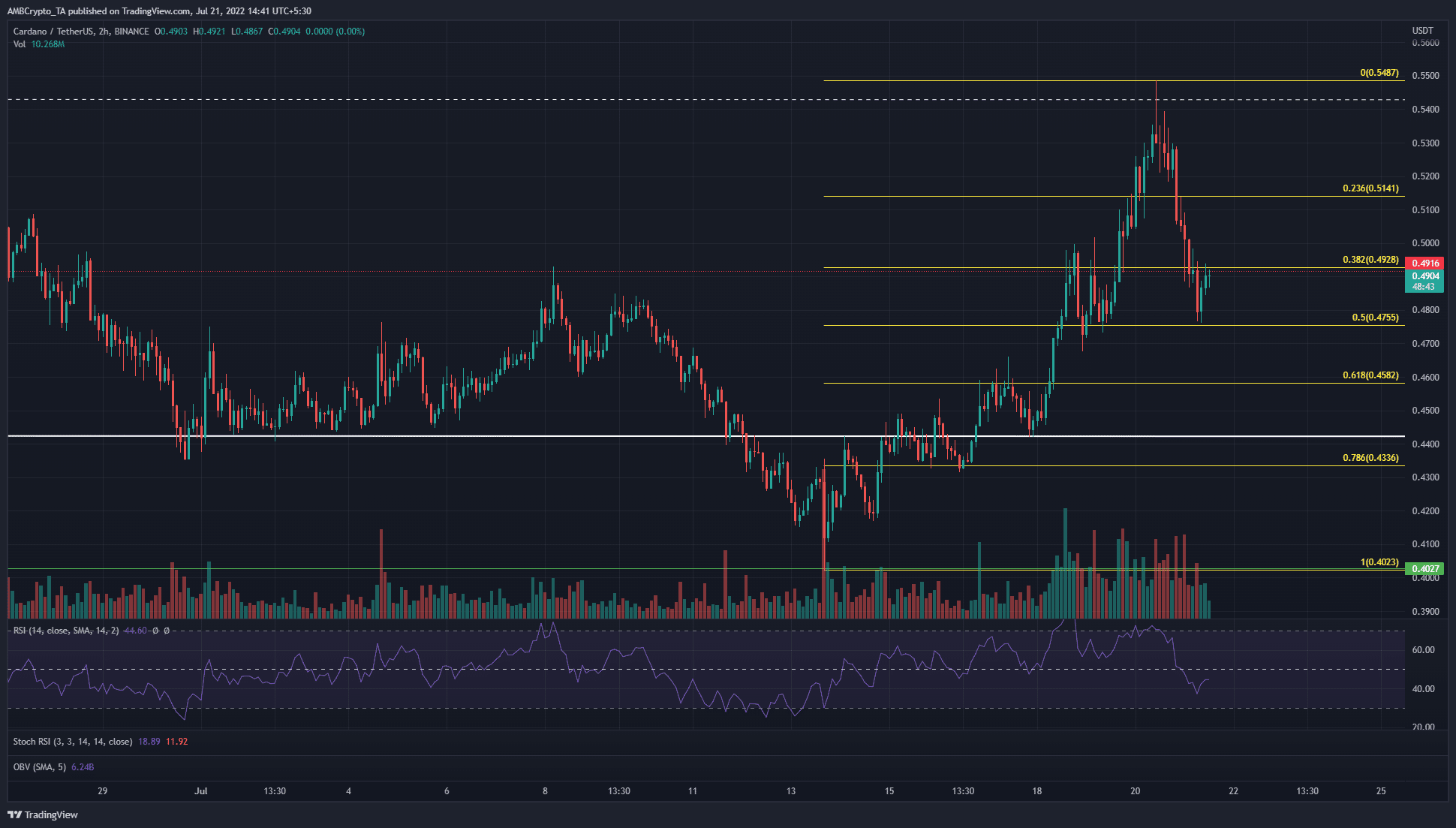 The fact that ADA was unable to flip the mid-range level to support would be quite disappointing to the bulls. On the two-hour chart, the move from $0.4 to $0.54 was used to plot a set of Fibonacci retracement levels (yellow).

They showed the 38.2% retracement level to lie at $0.493. At press time, the price had already closed a trading session beneath this level and appeared to retest it as resistance. Over the next few hours, ADA could resume its downward move.

A session close above $0.5 would be a sign of some short-term bullishness. Moreover, the $0.485-$0.505 area was a bastion in bearish hands. Based on the price action, a move lower looked to be brewing.

The 38.2% retracement level was important for the bulls to defend, but the bears have taken control of it. 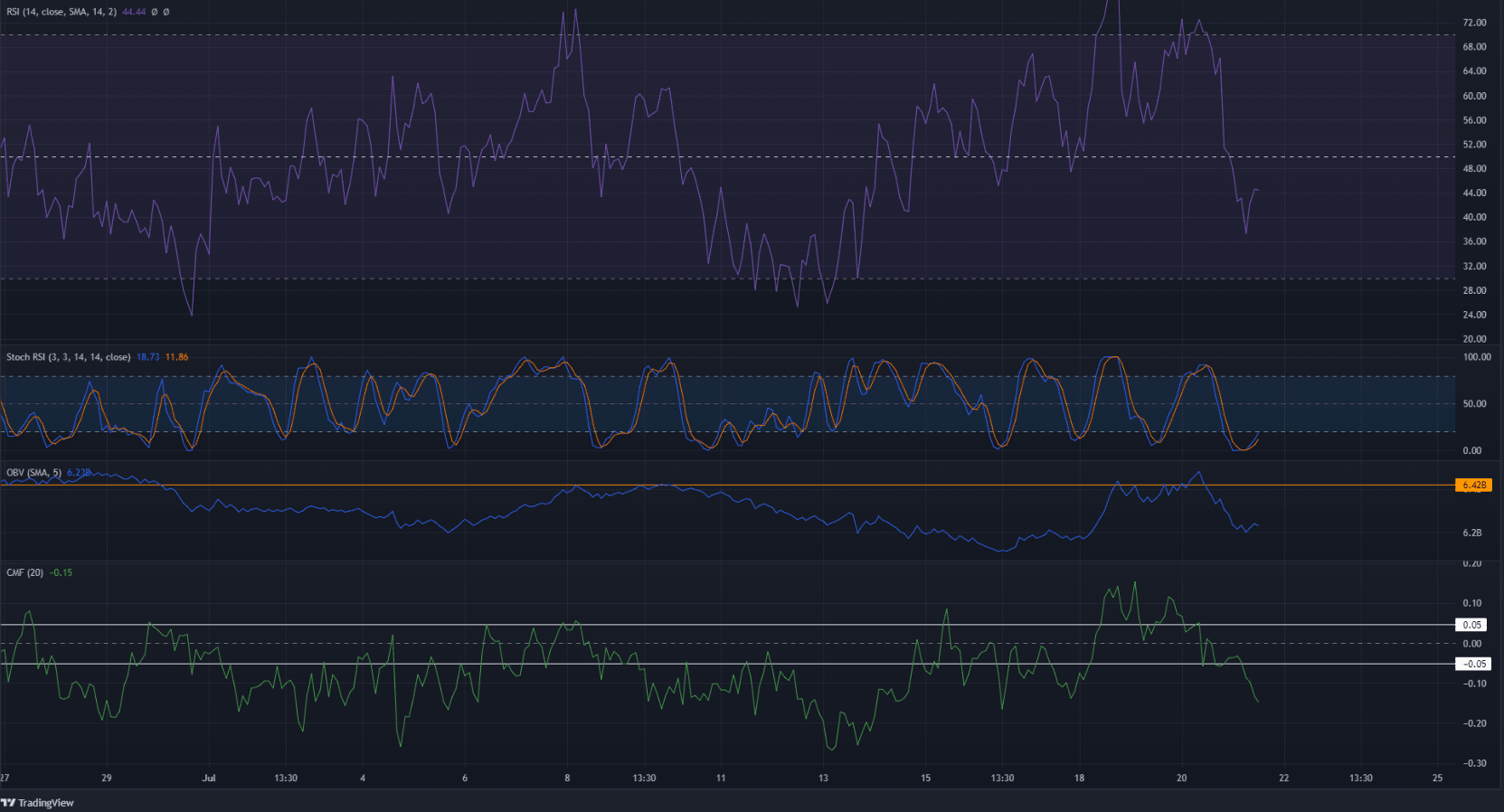 The Relative Strength Index (RSI) also slipped below neutral 50 on the two-hour timeframe, to show bearish ascendancy. The bullish crossover on the Stochastic RSI might not mean much by itself.

A bearish crossover can be awaited to explore entering short positions for lower timeframe traders.

The On-Balance Volume (OBV) was once again rejected at a resistance level from earlier in July. This meant the breakout had not really begun, despite to surge to $0.54. The Chaikin Money Flow (CMF) also slipped below the -0.05 mark to denote significant capital flow out of the market.

To summarize, Cardano enjoyed a strong bounce over the past week taking it from $0.4 to $0.54. Yet, the failure of the OBV to break above resistance was an indication of the lack of heavy demand.

The MATIC study of an unprecedented hike with ‘development’ probe

For Bitcoin [BTC] traders, next resistance level could be at…