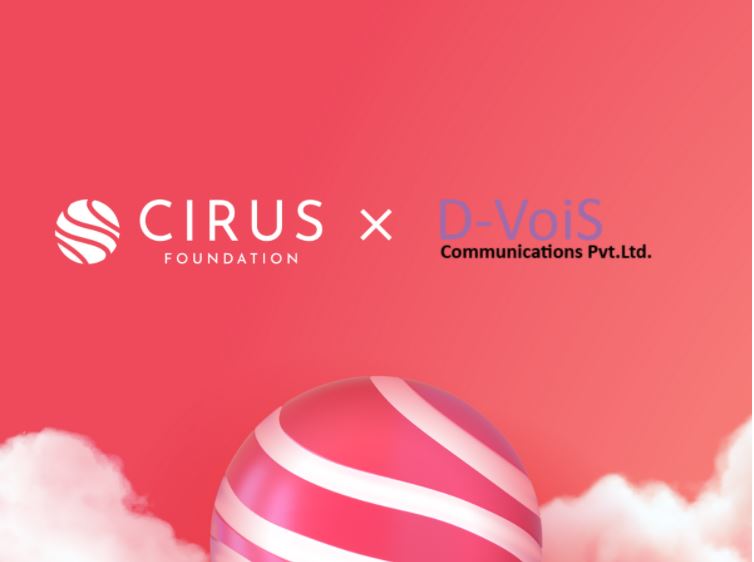 Blockchain-based data ownership initiative Cirus Foundation has released more information regarding its strategic agreement with D-VoiS. Following the previous release of the scope of the agreement, Cirus has further announced that the contract involves deployment to service one million households within the broader Indian market, averaging five members per household, for an initial total of up to five million users.

The initiative is a strategic plan to develop a deeper relationship with D-VoiS over the medium to long term and was formulated while Cirus was completing sandbox testing of the device, establishing the quality and richness of data collected.

The full experience of the Cirus Ecosystem consists of a virtual Platform, from which homeowners will be able to connect to a web-browsing extension and enable data monetization. The Cirus Device, which replaces a standard WiFi router, will be an addon to the Platform, creating a Rich First-Party Data asset, and ultimately generating greater revenue for the homeowner.

D-VoiS recognizes the importance of the synergy between the Platform and Device and will develop a deployment strategy to match. The homeowner can engage with the Cirus Ecosystem, enjoying the online Platform-based experience and then complement with the Cirus Device as they are deployed. The full scope of the contract is to establish a new paradigm of homeowners creating income from their Data. The multi-faceted, software-plus hardware approach creates the means for this to occur in a shorter period of time.

“The complementary approach of virtual and hardware-based solutions is part of a long-term strategy in which the homeowner will start a gradual progression of leveraging the utility and value of their data.” Said Cirus Co-Founder, Samartha

The broader goal is to facilitate the homeowners to effectively utilize their data remittances in evolving products offered by the Foundation, such as the Cirus Wallet. D-VoiS is a critical component to the strategy as their vast user base enables the Foundation to achieve monetization through the big data platforms.

“We are eagerly waiting for the supply of the first million routers and post our deployment, we are eager for the next million routers and beyond. The router roll-outs along with the immersive experience of the platform will enable our clientele to experience the first-of-a-kind solution. We have an exceptional belief that enabling people to earn data remittance with a multi-faceted approach keeps the customer happy and engaged for follow-on solutions. It’s a journey we can embark on together.” Said D-VoiS, CEO Ramesh Sathya

The brand I-On is a trusted name in multiple sectors, and the continuing moves into Residential Broadband are cause for excitement as they offer state-of-the-art NOC monitoring connectivity and provide high-speed, low latency internet for over hundred of thousands of subscribers.

Cirus Foundation is the development team behind the Cirus Ecosystem, an accessible onramp designed to accelerate the adoption of Web 3.0 and the Ownership Economy. This consists of the Cirus Device, the Cirus Core Platform, and the Cirus Confluence Network which work together to give users true ownership over the data streams they generate.