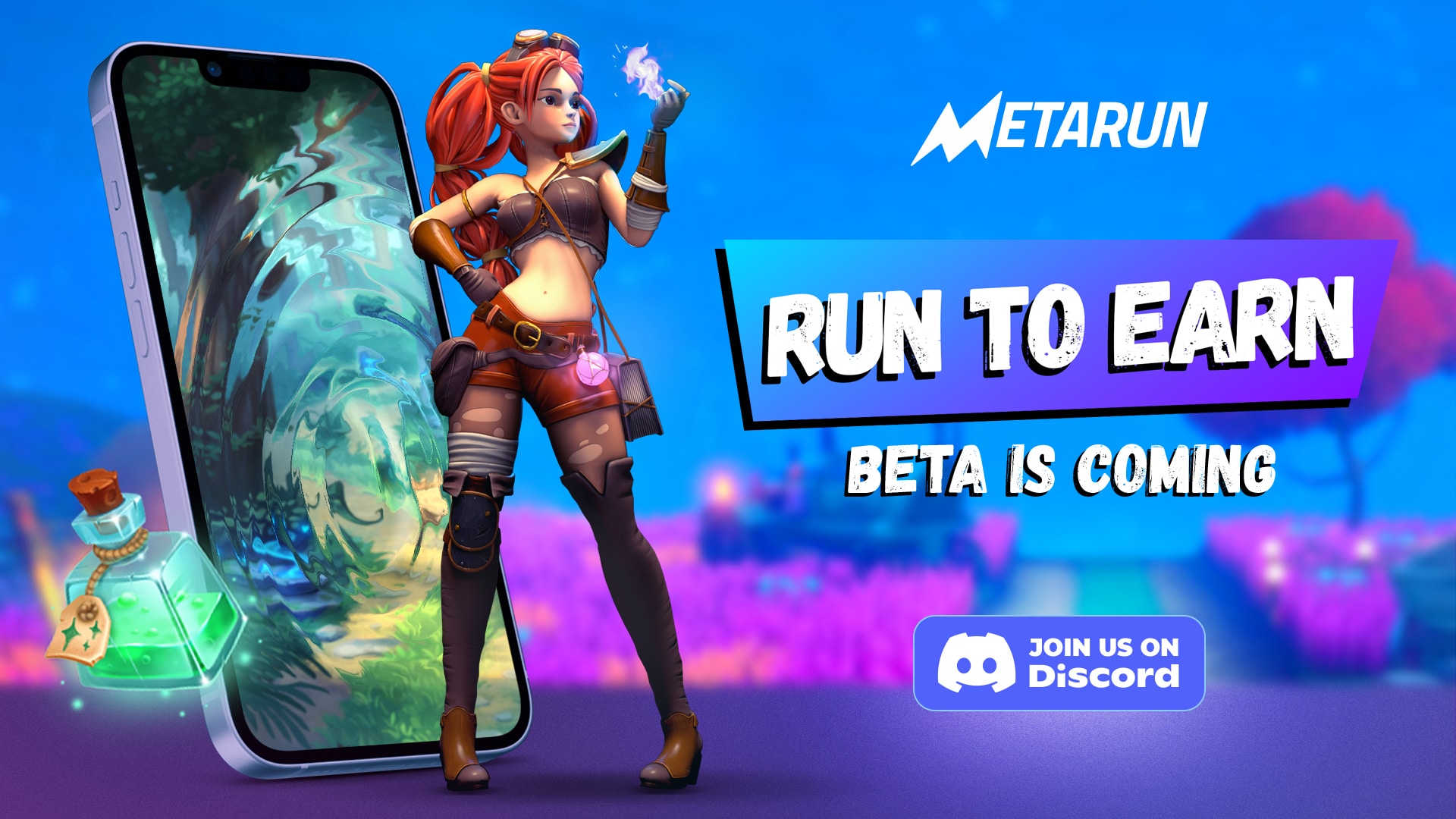 Metarun combines the best of traditional and crypto gaming. Built on the Unreal Engine, Metarun brings high-end quality graphics, and game mechanics and combines them with blockchain, making it stand apart from the current runner games. The game not only allows users to play and earn for their time spent on the game through its single-player mode but also gives users the fun and excitement of a competitive game through its PvP mode.

Metarun magnifies the gaming experience by emancipating users from the lack of control over In-game assets, for instance, character skins and the financial economy, by leveraging NFTs and Blockchain in its native mobile game anchored by an assets-powered economy. Metarun offers true ownership of assets by incorporating NFTs and a marketplace built to support its ecosystem, which is fuelled by its own native token $MRUN and in-game virtual currency OPAL.

In an interview with Matija Rosovic, the CEO of Metarun, we talked about the play-to-earn platform, the game’s features, the native token $MRUN, and much more.

1. What was the vision behind creating Metarun? Please describe the journey involved in creating this platform.

We love getting this question and it’s really satisfying to answer. The team is diehard gamers, which tends to mean we’re a little competitive too. So back to the vision. We created Metarun as a response to the buzz about blockchain gaming and we wanted to create something even better and raise the bar for the future of blockchain games.

2. What are the features that make Metarun stand out from other P2E games in the crypto space?

Why is Metarun unique? Great question. I believe it all comes down to the core of being a gamer; that competitive spirit and drive to win. Gamers always choose games that excite them and put their nerves and skills to the test. Some want to try out their abilities, for others, it’s about being top of the scoreboard, but no matter what, they want to compete to be the best real-life player, not just with AI or another auto-battler.

At the same time, we also don’t push the pay-to-play agenda. Metarun is free and even for users who don’t want to take advantage of the crypto elements, it’s still a whole lot of fun. In-game basic skills will be available, and players can upgrade through gameplay, not just cash.

Of course, the crown jewel is that the game is ad-free, so uninterrupted play.

3. Talk us through the different game modes offered by Metarun?

Metarun will be a PVE game allowing gamers to beat the game by fighting against the in-game environment in single-player mode. It also features PVP mode so players can compete against one another in the community and rise in the Hall of Fram leaderboards. Both have P2E economy integration giving an extra incentive to engage even more and redefine the concept of Play to Earn.

4. Could you explain more about the characters, character classes, and abilities in the game?

Sure, at the heart of it is the idea of a game that can set a standard in the blockchain environment and begins with bringing each character to life. We really invested in our characters and the environment and that’s not just limited to the graphics but the best backstories too.

Players can select from up to 45 different characters that will be unique to various sets of abilities and powers and will also differ in prices and ROI players will get.

Metarun’s closed Beta will see 3 characters made available and with the full release more will be added soon. At the same time, players who were in the Beta could stand to get up to $18 ROI per hour. How to become a tester? To get a spot among 550 lucky testers and some other perks, head over to our Discord and find out more.

5. What utilities do the native token $MRUN and the virtual currency OPAL provide on the platform’s ecosystem?

The game’s internal economic system runs on its native token $MRUN and the virtual currency OPAL and allows users to play and earn. They can also purchase in-game items and character skins as NFTs via the native cross-chain marketplace, giving the ultimate flexibility.

The utility of Metarun NFTs works like this: characters’ skins are traded in the form of NFTs, they can also be used in other games, which means full interoperability. One of the coolest features is that you can lend your NFT skin to other players if you don’t have enough time to play and share earnings with another player. NFT staking is also available, and this is an additional way to make money from your Metarun NFTs

6. What are the various partnerships propelling the platform forward?

As Metarun is a gaming project, the most important thing for us is that players play and enjoy our game and its content. To make sure of this, we’ve partnered with Rainmaker and skill guilds which will bring their gaming community to help shape the future of our game and bring blockchain gaming to the traditional gaming communities worldwide.

Additionally, partnerships with other gaming projects like Fabwelt, Penguin Karts, Breach, and others will have for effect cross-compatibility of NFT assets or characters, combining the projects into a multiverse environment with endless possibilities for the user.

Finally, partnering with various protocols and blockchain projects such as biconomy, @pay, protocol, and others will make sure we don’t have to develop anything from scratch but can integrate with the best solutions on the market, giving our team the time to focus on the most important thing: providing fun for our Metarunners.

7. What lies ahead on the Metarun roadmap? Talk to us about it.

We have just launched our official game trailer and got a massive response from the community, and we are extremely excited to move forward. The key milestone this summer is the Closed Beta, which will last for 4 weeks, and during this period, we are creating extremely favorable conditions for players to get involved in the early stages.

Depending on the NFT ticket level they get, the number of earnings can be up to $18. But it’s only for a lucky few. The number of slots available is limited to 550 and access to Closed Beta is only for Metarun’s Discord community members.

Another activity we recommend is to jump into the NFT whitelisting campaign, which, except for a whole list of utilities, will give the right to early access for the main NFT sale of playable characters. 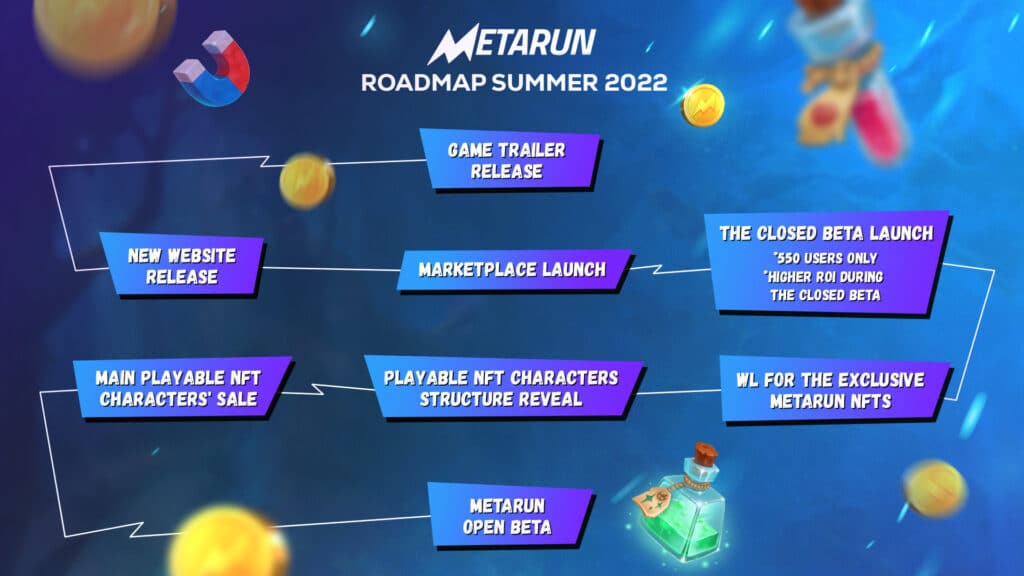 To know more about the game, visit their official website.