The performance of altcoins like Chainlink has been quite strong with LINK managing to post returns of 530% to its investors in Year-to-date. Unlike other major altcoins, LINK has not been highly correlated with Bitcoin and this somewhat weak correlation has restricted LINK from surging as much as other alts during the Bitcoin rally. However, a period of consolidation has been the time for LINK holders to double down when it comes to accumulating more tokens.

According to data provided by Santiment, the holders of the digital asset have been filling their bags with more LINK. 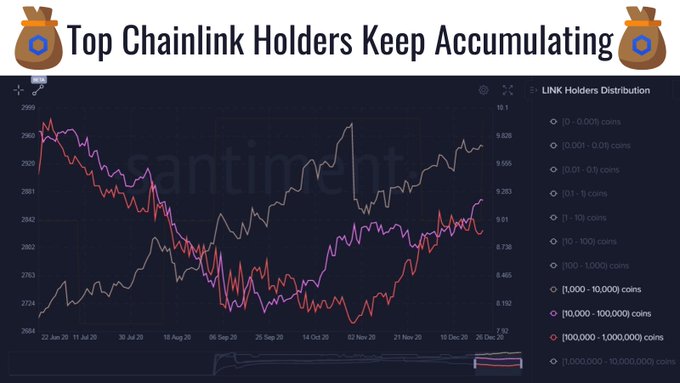 This rising number of LINK in wallets coincided with the falling value of the digital asset. Since 17 December, its value has fallen by nearly 24% and is currently trading at $12.18. Even though the market was bleeding, the holders were seeing long-term potential in the coin which could be why there was an increasing trend of buying.

Complimentary to the increased buying of LINK, the number of wallets storing the coins has moved up by a staggering 200%. At the beginning of the year, the number of wallets carrying LINK was around 100k, which has now shot up to over 300k in December, as per data provided by Nyctale. This trend was fueled by Micro [1-100 tokens] and Little [100-1k tokens] Holders.

Interestingly, the Chainlink network’s wealth concentration has increased drastically, and 90% of the supply was currently being held by just 0.08% of all wallets. This value was way higher at 0.3% earlier this year. This was an indication of the positive view of the coin’s future by the investors as they keep hodling.

Additionally, large addresses holding LINK has grown with no signs of capitulation despite an altcoin market that has seen dips. Along with these developments, the market sentiment and even though the coin was noting a fall, holders in the market increased by at least 10 million within an hour, as per Santiment’s data.

Although the market was not soaring, at press time, the LINK marines and smaller investors still have faith in the coin’s future. Even though Bitcoin has stolen the show, LINK may make a comeback with a resting BTC market.

Are the prospects for a Bitcoin ETF high in 2021?