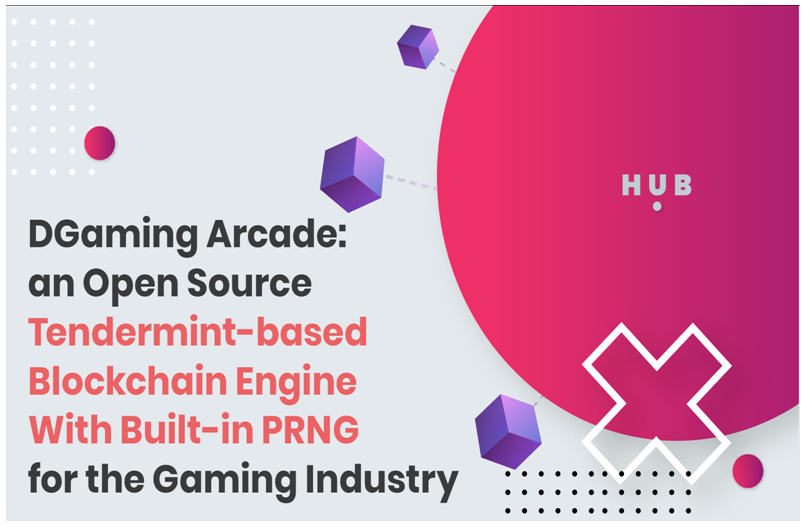 DGaming, a technology company that seeks to push the decentralized gaming industry towards mass adoption, has announced the open-source release of their Tendermint/CosmosSDK hack with distributed PRNG suitable for applications. The open-sourced code can be viewed in the DGaming Github repository.
The DGaming Arcade is part of the ecosystem of products and solutions being created by DGaming to help push the industry towards mass adoptions. To date, they have released The DGaming Store, and The DGaming Wallet, two solutions designed to improve the user experience for players to make games and their assets more accessible.
DGaming also announced The DGaming Hub, a decentralized hub in the Cosmos network, to connect standalone gaming blockchains to the economic ecosystem. Their latest project, The DGaming Arcade, is aimed at developers to help them implement fast and unbiased PRNG into their stand-alone blockchain games.
One of the most significant benefits of blockchain gaming is that it provides a provable fairway for players to enjoy their games. An in-built PRNG that is fast, and truly unbiasable, is vital for the game’s integrity. It can be a significant undertaking if developers wish to create it on their own.
However, with The DGaming Arcade, developers now have access to a ready-made, Tendermint-compatible PRNG that can be used within the Cosmos ecosystem. It’s now more viable for developers to create a standalone, application-specific blockchain with custom logic and PRNG. These application-specific blockchains can connect to The DGaming Hub in the Cosmos network.
DGaming’s Chief Technology Officer, Vasiliy Shapovalov stated,
“I think that the Cosmos ecosystem is due to a Cambrian explosion of consensus protocols and state machines suitable for different applications. The permissionless nature of inter blockchain communication will let people experiment on the base layer without losing access to the economical ecosystem and user interfaces. The DGaming Arcade is one example of that, we’re trying to integrate an equip powerful model of the BLS threshold signature with CosmosSDK-based PoS mechanics.”
The open-source project is available immediately in the DGaming Github repository, and DGaming invites all interested parties to implement it into their projects.
For further information, please contact:
DGaming Chief Technology Officer, Vasiliy Shapovalov.