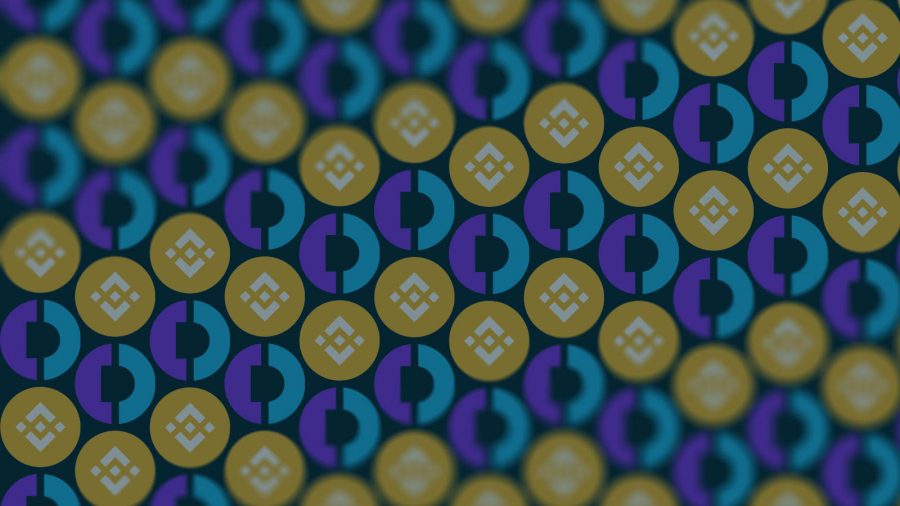 There isn’t a trader or even hobbyist in the industry who hasn’t heard of Binance. Shooting out of nowhere to become the world’s largest cryptocurrency exchange by trading volume, the Binance Coin [BNB] ICO was one of 2017’s most successful. And its exchange token is currently tearing up the charts. Now firmly nestled among the top 10 cryptos, what does this mean for DGTX and the future of exchange tokens?

Clearly, not every exchange has such a charismatic and influential leader at its helm as Changpeng Zhao, now one of Crypto’s most important personalities. In the same vein, not all exchanges have such a clear use case for their tokens or ambitious plans for creating their own blockchain either.

However, in general, exchange tokens do have great potential for ROI since they are built into the exchange with the goal of increasing demand. As such, when handled correctly, they will always have a strong use case, which translates into a need. Exchange users need the token; the token demand rises as a result, along with its price.

In the case of BNB, the token allows users on the exchange to receive certain discounts on trading fees when paying in BNB. To encourage greater demand for BNB, there is also a discount for users wanting to buy them to pay fees.

This discount reduces over time, presumably with the goal of capturing investors, increasing price and attracting further investors as the benefits of owning BNB become clear.

In the first year of operation, Binance sold BNB tokens with as much as a 50% discount. This has since been reduced to 25% and over years three and four will be reduced to 12.5% and 6.24% respectively.

BNB holders also have further uses for their exchange tokens than simply paying trading fees. They can now use them to invest in ICOs launched on the Binance platform Launchpad. Holders of more than 500 BNB can also trade at additionally reduced prices.

In addition to that, the BNB exchange token can even be used to pay for goods and services in the high street in some parts of the world, despite its volatility.

Perhaps one of the most compelling use cases for BNB though is that it will be the only means of payment for new listings on its decentralized exchange [DEX]. The Binance Chain will charge close to $100K for new coin listings.

BNB Is Currently on a Bull Run

Why has BNB seen such a spike in price lately? Surging by more than 60% in one month and still rising? 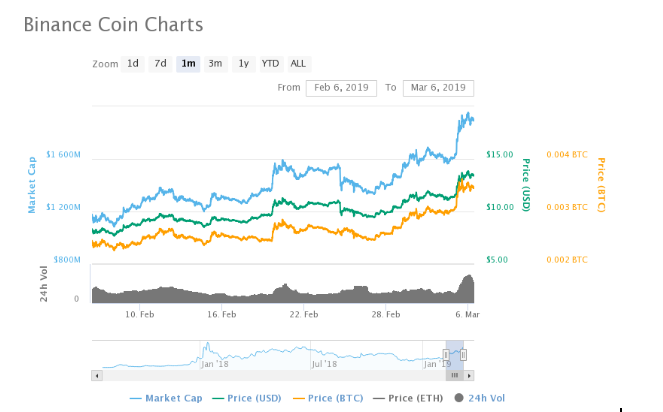 As Binance grows closer to launching its fully decentralized exchange and releasing Binance Chain, demand for BNB is rising. Similar to the Ethereum blockchain, users on it will be able to create their own tokens and all the gas fees are payable in BNB.

It’s the updates and announcements on these developments that appear to be pushing up demand for the BNB token.

Another Use for the BNB

This latest bull run shows that another use for the BNB token, beyond an exchange token, is as an investment vehicle. After all, if you had bought into the BNB token ICO when the coins were worth just $0.10, you would have made a decent profit by now in spite of the bear market. BNB is currently trading at $15.01. 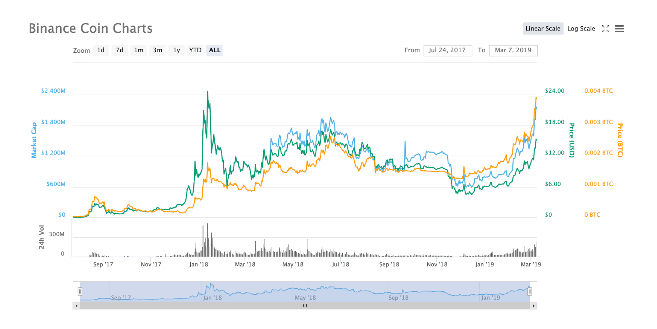 Of course, this presents a sort of double-edged sword for regulators, since a clear utility and exchange token also shows clear signs of being a security. The BNB token’s performance is linked to that of Binance and this is one of the main factors that keeps Binance at the gates when it comes to U.S. investors.

However, it also illustrates the enormous potential of exchange tokens in providing investors with ROI.

DGTX Exchange Token Is Already Proving Its Worth

The DGTX exchange token has all the characteristics of taking off in earnest like the BNB. There are already many parallels that we can draw even before the public launch of the commission-free futures exchange.

Like Binance’s Changpeng Zhao, founder and CEO of Digitex Futures Adam Todd is a visionary and charismatic leader who held a sell-out ICO in January 2018. The DGTX ICO sold out in just 17 minutes.

The DGTX token has also, like BNB, bucked the bear market trend by going on a tearing bull run in October 2018 ahead of the awaited demo of the exchange at the Malta Blockchain Summit hitting a record high of over 14 cents and a 1,400% ROI from its ICO.

While the token later followed the general market trend in November, it is also at the start of a new bull run this month. With over one million users anxiously waiting for the launch date of April 30, DGTX may quite possibly hit a new ATH. 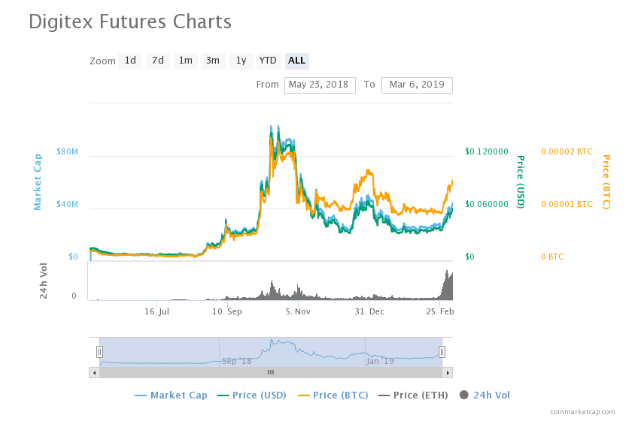 This would seem to be due to some key announcements from the company. The launch of the Digitex Treasury, a transparent and sustainable funding plan for the exchange’s future, and the setting of a public launch date, April 30.

Digitex also revealed a partnership with trading platform experts Spotware. The DGTX is currently trading at $0.082, making gains of well over 90 percent in less than a month and providing investors with over 800% ROI from its ICO currently. Again, despite the bear market. 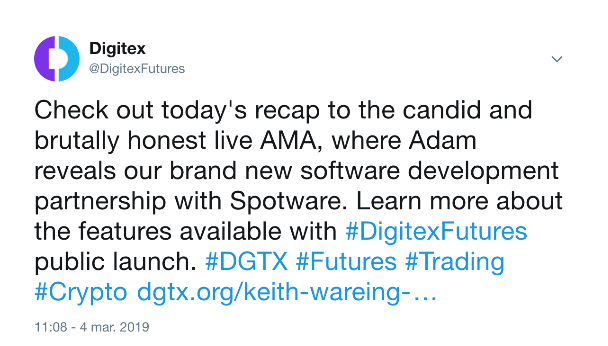 The Clear Use Case for DGTX

All trades on the exchange must take place in DGTX. This provides a constant demand for the token, which therefore drives up its price. As more traders flock to the platform to take advantage of commission-free trading, the token price will rise.

Digitex Futures is able to cover the operational costs of the exchange thanks to its revenue model of token issuance and token appreciation. This means that, for the first time, the exchange’s interests are aligned with those of its users. Instead of siphoning profits out of the liquidity pool, both the exchange and its users want the price to rise.

Digitex Futures, like Binance, has loftier goals in sight than being just a commission-free cryptocurrency futures exchange. From public launch and thanks to its partnership with Spotware, the makers of cTrader, the exchange will offer traditional futures markets along with cryptos [BTC, LTC, ETH] in the shape of Forex, indices, selected stocks, commodities, and metals.

Moreover, the exchange will release commission-free spot trading later in the year and also provide its users with decentralized account balances.

Digitex won’t be a decentralized exchange like Binance eventually will. However, it will combine the best of centralized features, such as its super fast order matching engine and one-click ladder trading interface, with the security of not holding on to user funds.

At the forefront of innovation, Digitex is the first hybrid exchange to be integrating Ethereum’s scaling solution, Plasma protocol, into its technology stack in order to offer decentralized account balances. The company was personally approached by Ethereum-approved team Matter Inc. to make Digitex one of its first use cases.

The high security of the exchange along with the addition of traditional futures markets will make the audience for the exchange potentially huge. And in fact, the company already has well over one million people signed up to its waitlist for public launch.

It will be interesting to see the evolution of the Digitex Future exchange upon launch and the performance of its DGTX token. But from where we’re standing now, it has all the hallmarks of being the next BNB.