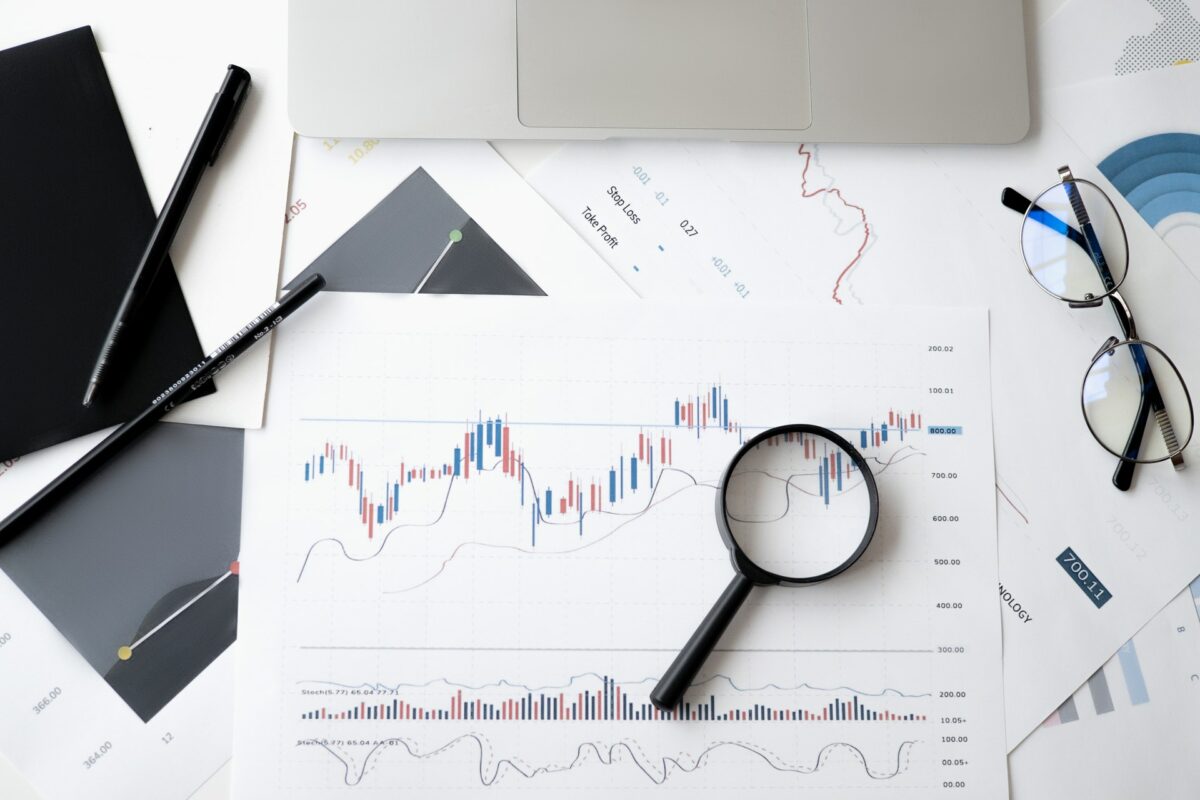 The entire cryptocurrency market has been facing severe bearishness over the past few weeks. The king of altcoins, Ethereum broke down below crucial support levels and would incur selling pressures from all around. That effect would automatically trickle down to the other smaller altcoins in the market like VeChain.

However, thanks to its recent rally, Solana seemed to be in a relatively better place to continue its upward trajectory if market sentiments improve. 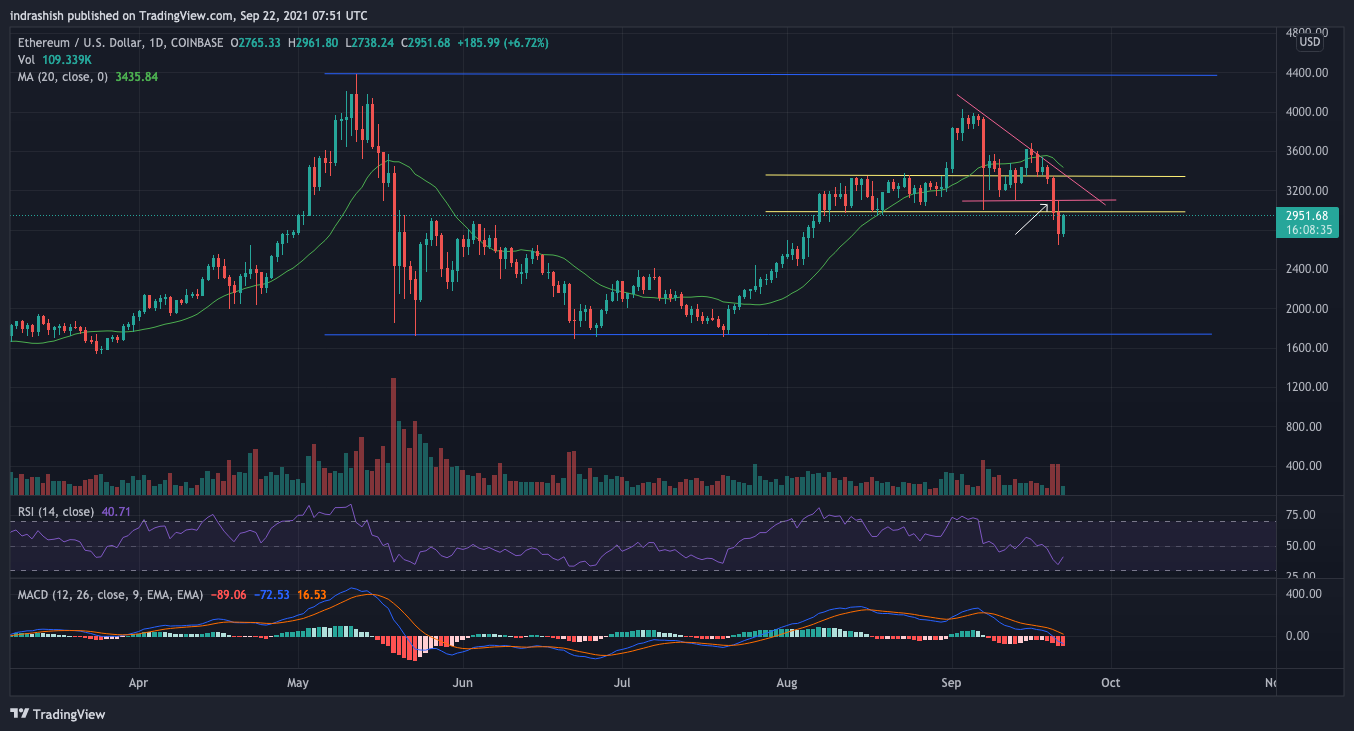 Ever since the correction that happened on El Salvador’s Bitcoin Day ETH/USD has been trading in a very narrow range between $3100 to $3500. It had briefly broken out of the range, only to fall back down into it, before correcting even more.

This was a worrisome signal since it broke down (white arrow) below the descending triangle pattern on the chart as depicted by the pink lines. Ethereum prices also broke below the next support level of $2990 as depicted by the yellow trend line. So unless the prices are able to rally back from current levels to the range of $4000-$4400, the short term future for this counter remained bleak.

The Relative Strength Index dropped below 40 mark which would add to the selling pressure in this currency pair. The MACD, which suffered a bearish crossover a few weeks back entered the negative territory too. The prices have also moved significantly below the 20-day Moving Average line (marked in green) to further add to the bearishness. 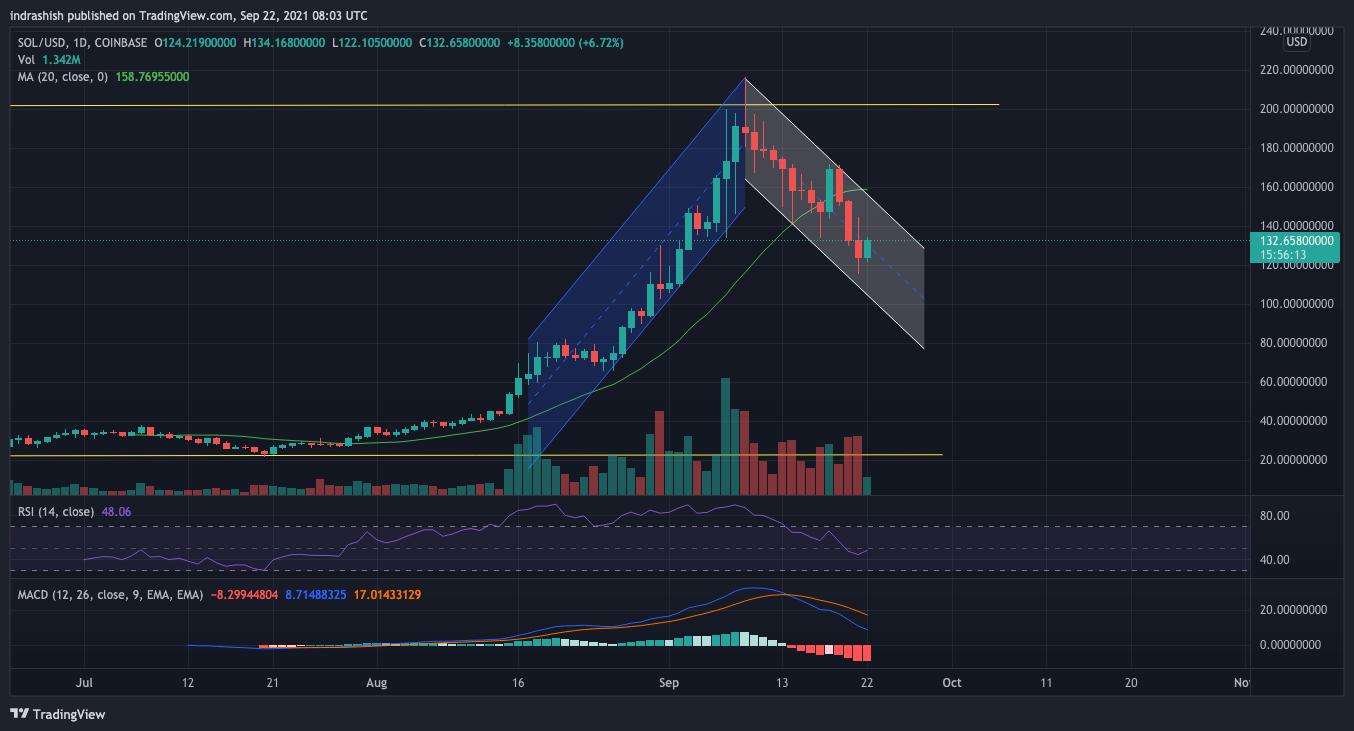 Solana has been one of the best performing coins in the past month and a half and its rally propelled it to the seventh biggest coin by market capitalization. Since mid-August, 2021 it rallied nearly five times in price (blue channel), before correcting sharply a month later in line with the entire market and that correction turned into a bearish trend ever since.

Due to the nature of the recent rally, the only logical level of support for the prices would come near $20. However, if Solana prices are able to breakout of the white channel from current levels to above $160, the earlier rally may resume.

Despite the major correction over the past few days from $200 to current prices, indicators had turned extremely bearish yet. The Relative Strength Index remained near the 50 mark so there was still some bullishness.

The MACD which suffered a bearish crossover still remained well within the positive region as well. The prices however, broke down below the 20-day Moving Average (green) but again, it isn’t too far away to retest those levels. So overall, bullish sentiment in this particular coin still persisted. 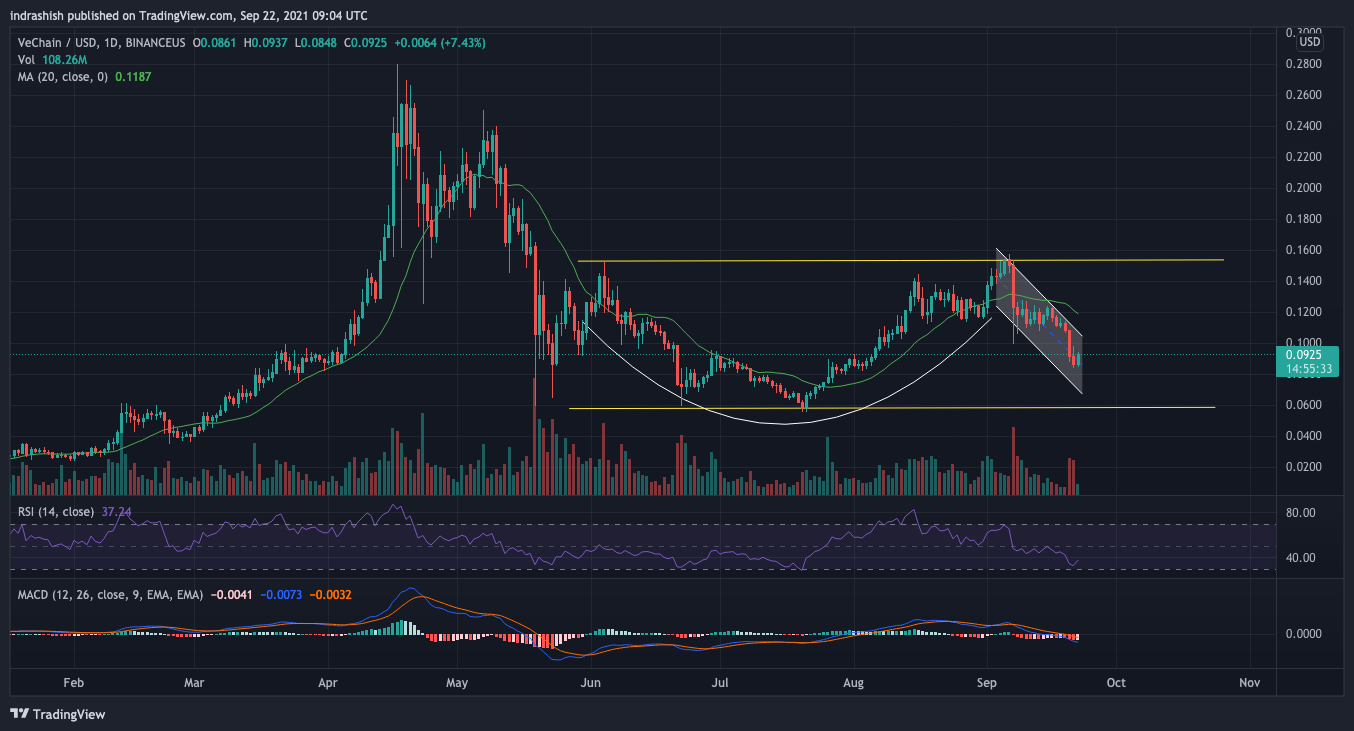 The VET/USD currency pair was extremely volatile and fell significantly from its all time highs. Since then it was trading within a very wide range however, a promising chart pattern was beginning to emerge for this particular coin.

A bullish cup and handle pattern was seen (white lines) and a breakout over $0.12-$0.16 can result in a major rally. The level of support for VeChain was around $0.06 and that should hold fine based on historical data.

Although, the indicators did not show as much enthusiasm on the bullish side. The Relative Strength Index touched 30 levels and currently was around 37 which was very weak. The MACD too breached the zero line and crossed over into the negative territory.

The prices also dropped below the 20-day Moving Average (green) over two weeks ago and were not able to break out of it ever since. So overall, this coin, much like many others in the market, faced the heat of extreme bearishness in the market and would require a convincing breakout over $0.16 to be bullish again.

The key to Litecoin’s price resuming its ascent is…