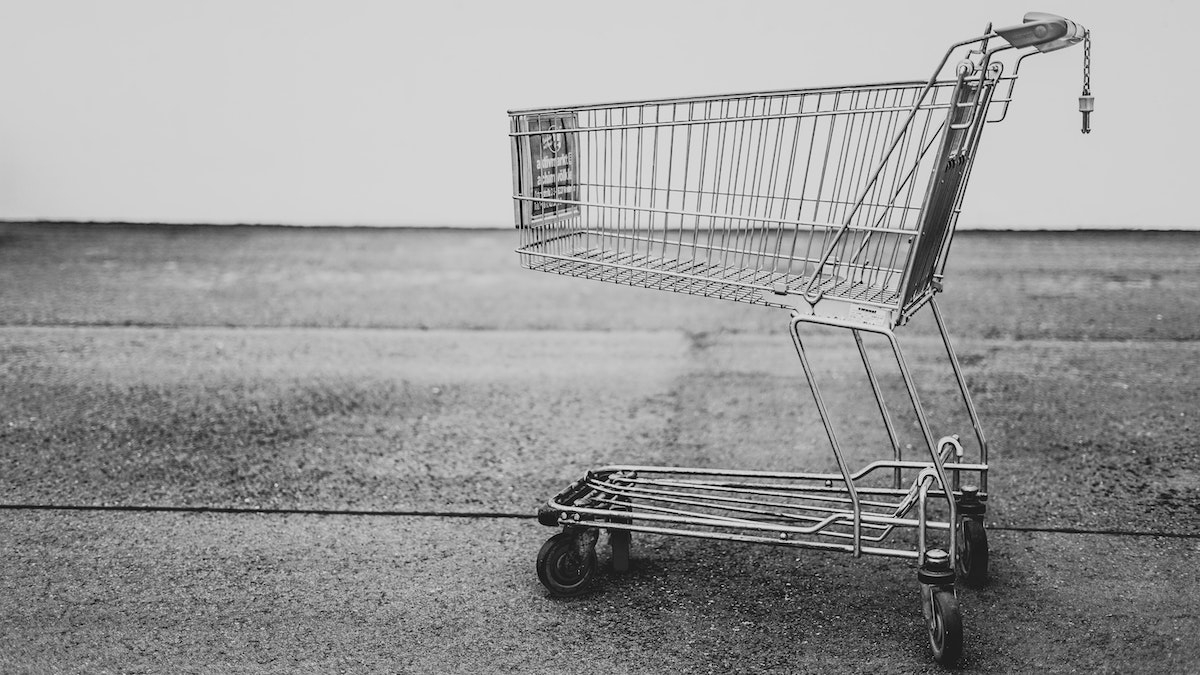 Bitcoin prices continue to consolidate this week, compressing into an increasingly tight area below the $40k mark. Long-term holders seem to run out of patience as accumulation trends softened in the short term despite extremely constructive long-term demand trends.

According to a report from blockchain analytics firm Glassnode, long-term holders of Bitcoin had increased their spending level. Uncertainty and macro risks were current headwinds that precipitated the increase in the sell-offs last week. Thus, affecting the LTHs as well as shaking some short-term holders out of their positions.

Post Jan 2022, the accumulation trend score fluctuated between a value of 0.2 and 0.5. This highlighted the impact of global macro uncertainty on investor sentiment.

In addition, coins older than six months accounted for 5% of total spending, a level not seen since last November. This was marginally more bearish than recent weeks. Although, it was not at levels that signified widespread fear or loss of conviction.

The spending activity related to LTHs further indicated de-risking from the market. However, HODLing remained the predominant investing strategy.  This is because, on-chain indicators for Bitcoin, more specifically Coin Days Destroyed (CDD) traded consistently higher than a typical accumulation phase. The aggregate sum of coin-day destruction over the last 90-days remained historically low. 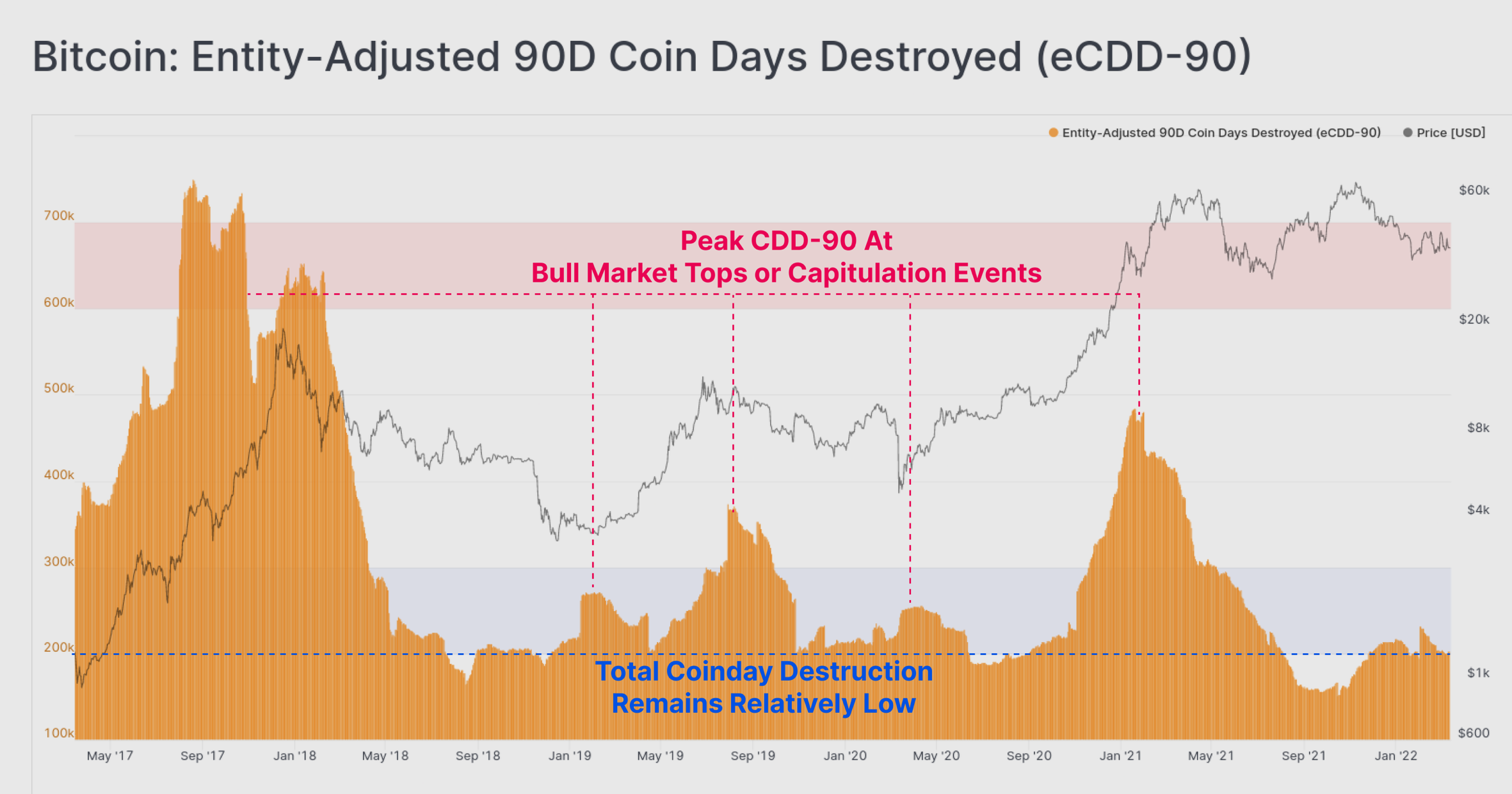 “During bear markets, the CDD-90 metric trades at low levels as investors slowly accumulate coins and there is an aggregate preference for HODLing.”

This suggested that accumulation and HODLing was the preferred behavior pattern at present. It would spike higher following capitulation events, as fear and panic created a final wave of sell-side pressure. Thereby, exhausting all remaining bears.

Also to be noted, short-term holders (STH) who held coins for less than 155 days continue to decline in number, but not necessarily due to selling. Glassnode suggested that while it was common for STH to sell;

“(…) the recent decline in STH supply can only occur when large portions of the coin supply are dormant and crossing the 155-day age threshold, becoming Long-Term Holder supply.”

However, this might not hold for long. The profit/loss ratio of STH supply traded near the all-time low set in mid-2021. As per the provided graphical data below, 82% of STH coins were at a loss. Indeed, the most likely source of sell-side pressure

This could indicate at the later stage of a bear market- when investors send their coins to cold storage for the return to positive profit margins. 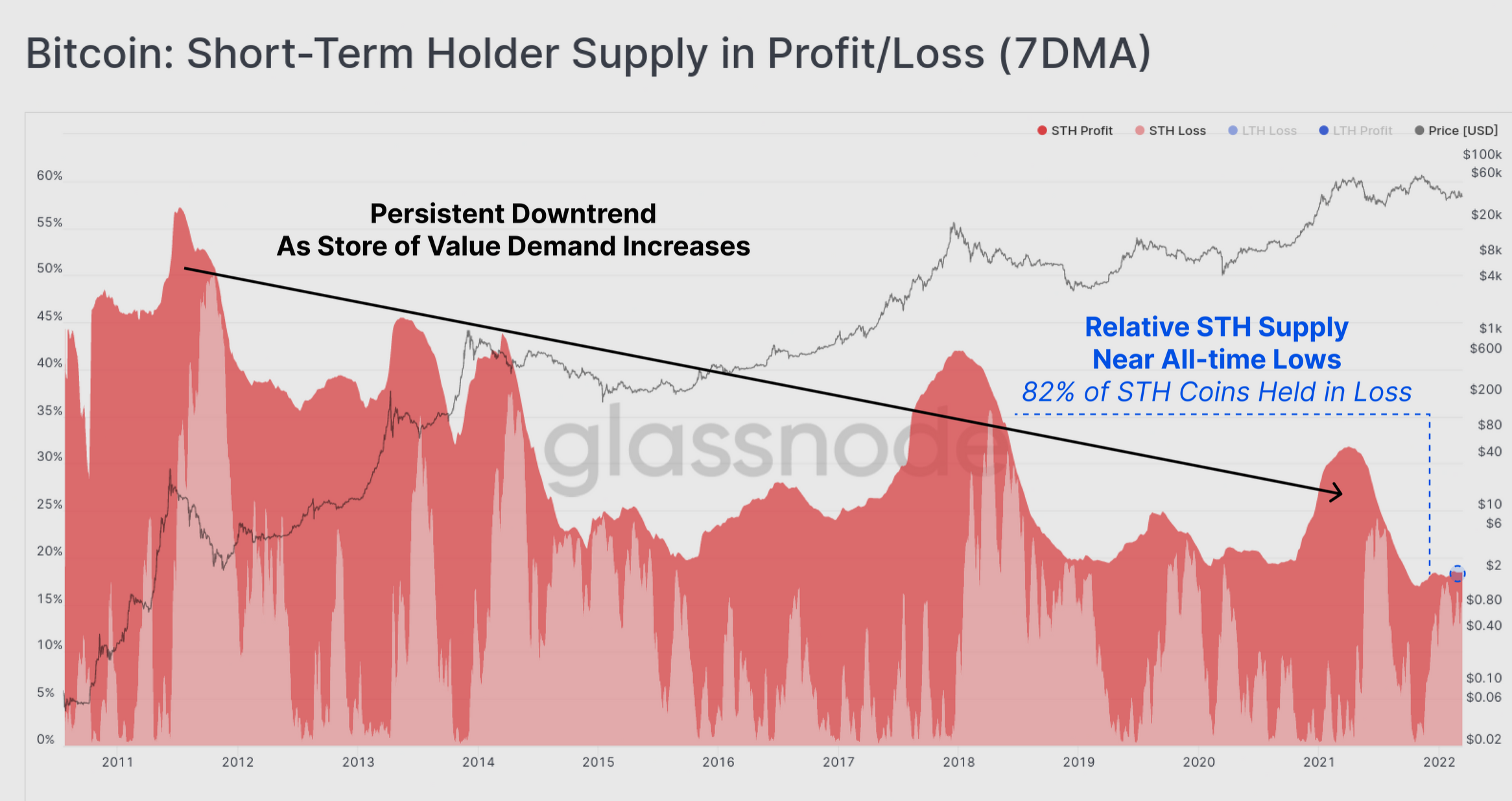 Nonetheless, the illiquid supply of Bitcoin became 3.2x bigger than the highly liquid one. In fact, a growing number of institutions kept entering BTC.

99% — Currently over 99% of all #Bitcoin volume comes from transactions of over $100k
The dominance of institutions and change in market structure accelerated in Q3 2020 pic.twitter.com/Lo0ieCrPZG