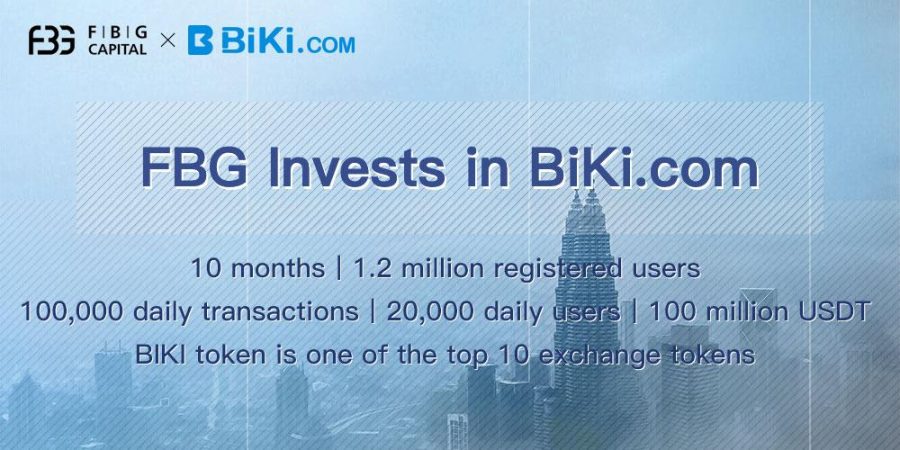 Fast-growing cryptocurrency exchange BiKi.com has recently attracted yet another slew of investments, this time from influential blockchain investment institutions Genesis Capital and FBG Capital.
Crypto fund Genesis Capital’s purported mission of discovering and supporting early-stage projects with the most potential is particularly apt in the case of BiKi.com. In under a year, the infant exchange has managed to accumulate more than 1.2 million registered users and more than 100K daily active users, not to mention its impressive climb to top 15 rankings on the rungs of the global crypto exchange ladder.
Genesis’ current investment portfolio includes esteemed projects the likes of Tron, Quarkchain, Egretia, and Arcblock, to name a few. In total, Genesis has invested 2 million in BiKi.com, the first million on 27th May followed by another million on 29th May.
Previously backed by Silicon Valley VC Sequoia, digital asset management firm FBG Capital, whose past investment projects have increased 10 to 100 times, has also set its sights on BiKi. FBG has long gained industry respect for discovering and investing in projects such as 0x, Zilliqa, OmiseGO, IOST and Aelf, years before they became successful.
FBG’s strategic investment in BiKi will see multi-level co-operation between the two parties which includes FBG providing professional and market resources that will aid BiKi in increasing its market share and implementing trading platform improvements. The enthusiasm of FBG CEO Zhou Shouji, who has been featured on the cover of Forbes, has certainly improved branding for the young exchange, with his friendly recommendations of BiKi skyrocketing the value of its token by 300% in one week.
Ethan Ng, CEO of BiKi.com SEA, said:
“We are extremely honored that FBG has such great faith in Biki. FBG has continually shown amazing foresight in their investments and this partnership is a clear signal that FBG believes BiKi is going places; especially now, with their support, we will no doubt achieve even better project quality, services and branding.”
Not Just Another Exchange
Notably, BiKi.com‘s strategy of listing not only the top 100 most popular tokens but also emerging high-quality projects on the exchange has stood it in good stead. With the tendency of investors to flock to trending projects, using users to attract other users is a core competitive advantage for exchanges.
Its focus on conversion marketing during a bear market in late 2018 and early 2019 using unconventional user-growth tactics has also proven to be effective. By converting a non-crypto audience into new exchange users through Chinese e-commerce platforms, BiKi was able to generate daily real transaction volumes of 20 to 100 million USDT, with its net profit in May reaching RMB 10 million, approximately USD 1.5 million.
Targeting foreign market expansion within a competitive timeline, building community partners worldwide as well as providing substantial support for listed projects also sets BiKi apart from its peers.
With corporate giants like Facebook, Goldman Sachs, JP Morgan coming out with digital currencies, coupled with mainstream media’s constant coverage, cryptocurrencies have finally gained mass acceptance. Should market conditions continue to improve, a high influx of new investors entering the market can be expected, with exchanges being the greatest benefactors of this new wave of users.
Huobi co-founder and BiKi.com’s largest investor Jun Du said:
“This year’s ‘miracle’ should belong to BiKi. With quality digital assets and strong consumer demand going hand-in-hand, BiKi will likely emerge a dark horse when the bull market breaks out again.”

About BiKi.com
Headquartered in Singapore, BiKi.com is a global cryptocurrency exchange that provides a digital assets platform for trading more than 100 cryptocurrencies and 127 trading pairs. Since beginning operations in Aug 2018, BiKi.com is considered one of the fastest-growing cryptocurrency exchanges in the world with an accumulated 1.2 million registered users and 100,000 daily active users, ranking within the top 15 exchanges globally.
Company Contact:
Chang Jie Lin, BiKi.com
Mail to +65-94556702
Media Contact:
Cecilia Wong, yourPRstrategist
Mail to +65-91826605

APAC BLOCKCHAIN 2019: Going beyond the hype to capture the strategic value of this revolutionary technology