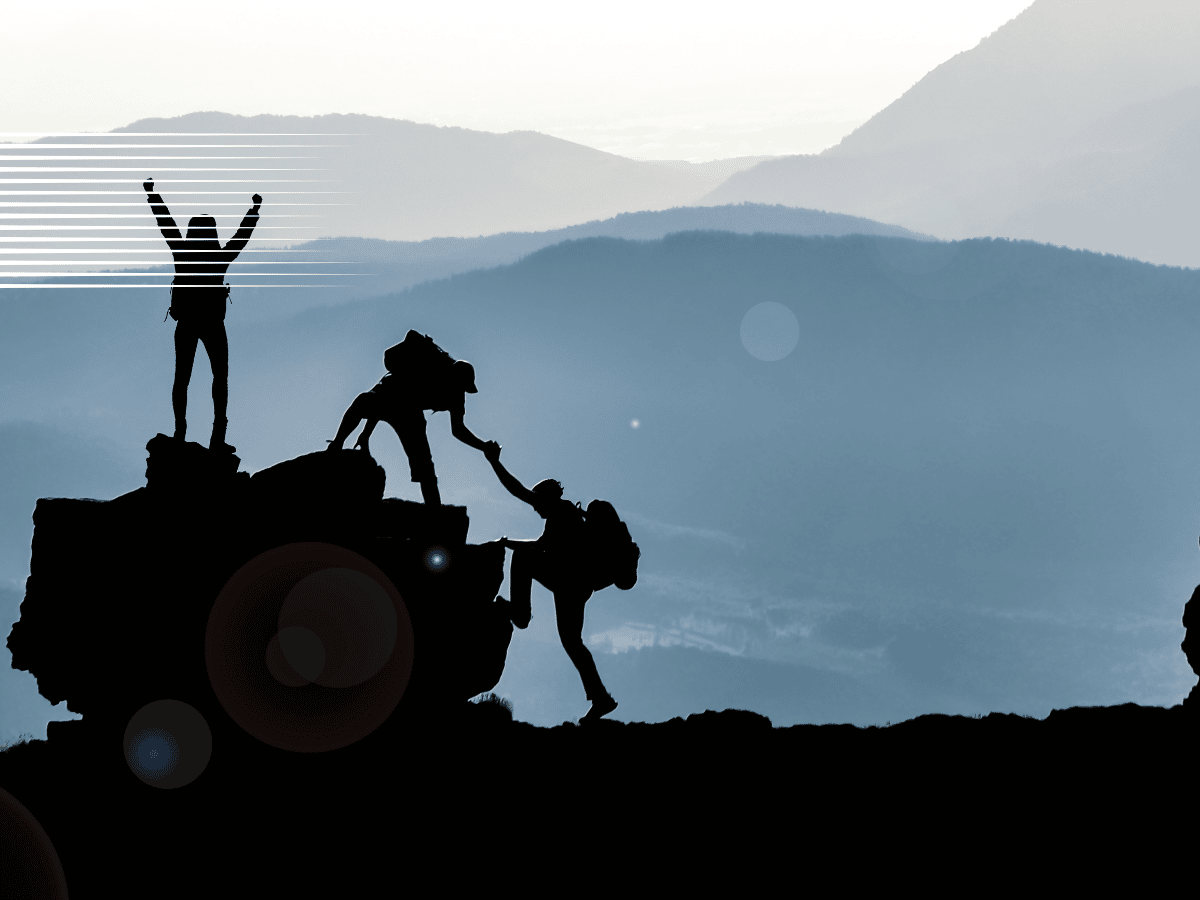 Decline and primarily depreciation was the story of the Filecoin [FIL] till we hit Q3 of 2022. Interestingly, the decentralized storage network recorded the first positive revenue growth since the HyperDrive upgrade.

Recall that the HyperDrive upgrade took place in the second quarter (Q2) of 2021 to expand the Filecoin storage onboarding. Unfortunately, FIL had not recorded much success in revenue growth until this revelation by Messari, a leading crypto market intelligence provider.

Let's dive into some metrics from this past quarter and what's ahead. 🧵 pic.twitter.com/8U3E1sqYzQ

Filecoin didn’t witness any traction in Q1 and Q2 of 2022 owing to extreme uncertainty looming around the entire cryptocurrency market. However, as per Filecoin’s latest report, it grew 9% in protocol revenue in Q3. This growth led to an increase of $1.8 million and as such more fees were generated from the token holders’ transactions.

Ahead here; can’t catch a break there

Despite the breakthrough, Filecoin could not get ahead in all ramifications. According to the same report, the Filecoin network could not eliminate the decrease in its supply-side revenue, which went down by 4%. 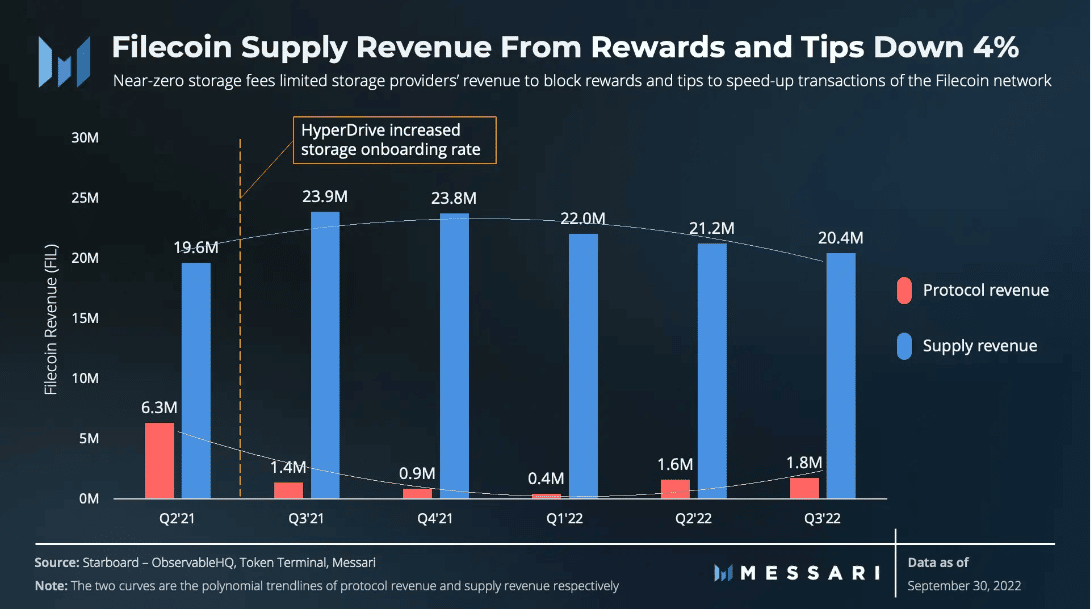 Additionally, Filecoin seems to have achieved the goals of the upgrade as the storage utilizations grew six times Year-on-Year (YoY). This increase also spread its effect on other parts of the FIL network.

For context, the six-time growth helped Filecoin provide more block rewards for storage providers. In turn, the FIL storage deals increased by 82% as compared to the last quarter.

Per its price, FIL did not seem ready to leave behind the woeful Q3 performance. At press time, the altcoin had shredded 3.39% in the last 24 hours while trading at $5.06. According to CoinMarketCap, there was no contrasting position per its volume, which decreased by 40.56% within the same timeframe.

Will FVM change the momentum?

After the HyperDrive upgrade, Filecoin can look forward to the FVM integration. According to the FIL team, FVM would allow computation and programmability on the Filecoin network. While the FVM testnet is due for November 2022, Santiment revealed that preparation may have begun for the event.

Based on data from the on-chain analytic platforms, FIL’s development activity also witnessed a surge. Despite decreasing to 46.11 on 14 October, it reversed to an increase at press time, with the value at 49.67.

In other respects, FIL registered some high strides on 3 and 12 October per its social dominance. However, interest and discussions around the coin seemed to have dwindled as the social dominance remained at 0.013%.

On the charts, it seemed that FIL was less concerned about breaking out of the bears. But would the upcoming FVM testnet and launch play any role in creating better fortunes?

Per the Exponential Moving Average (EMA), FIL seemed destined for further bearish momentum in the short term. This was because the 50 EMA (yellow) maintained a position above the 20 EMA (blue). Albeit, FIL investors, could find the indications from the 200-week EMA, which showed bullish signs in the long term. 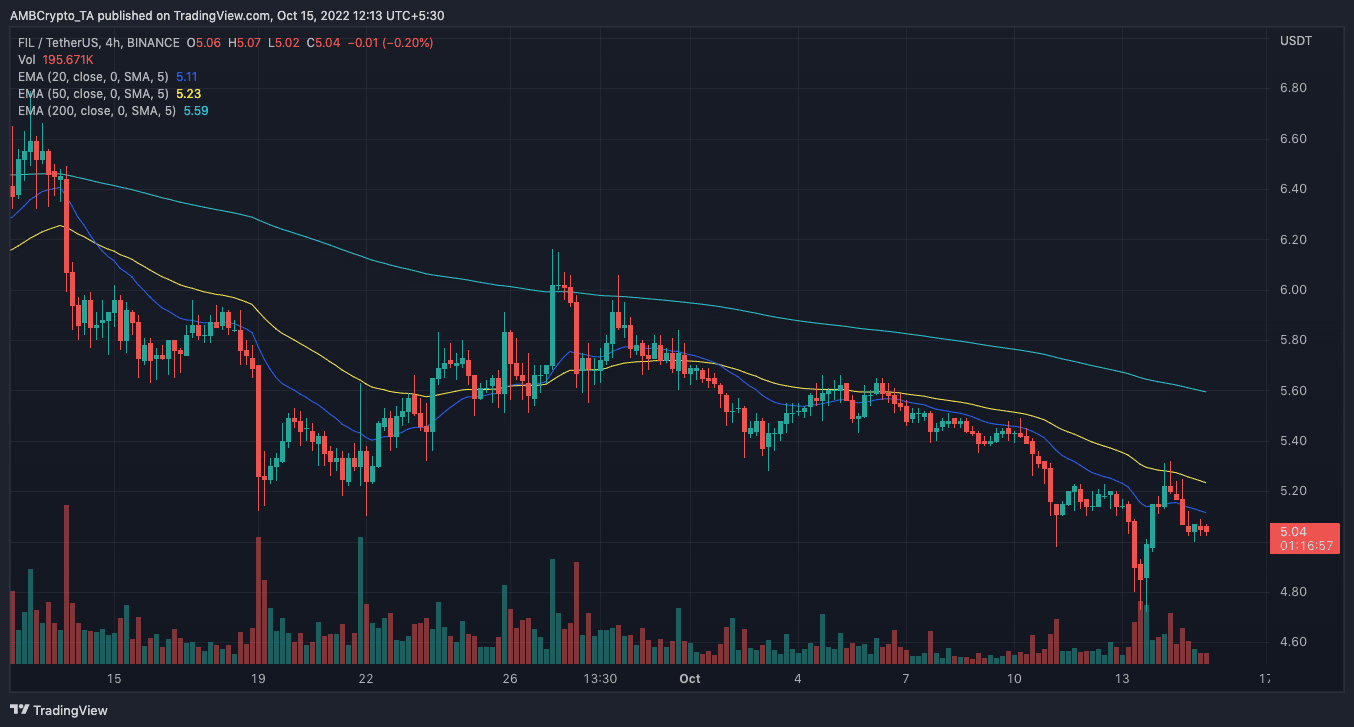 Related Topics:FILFileCoinFilecoin Price Prediction
Up Next