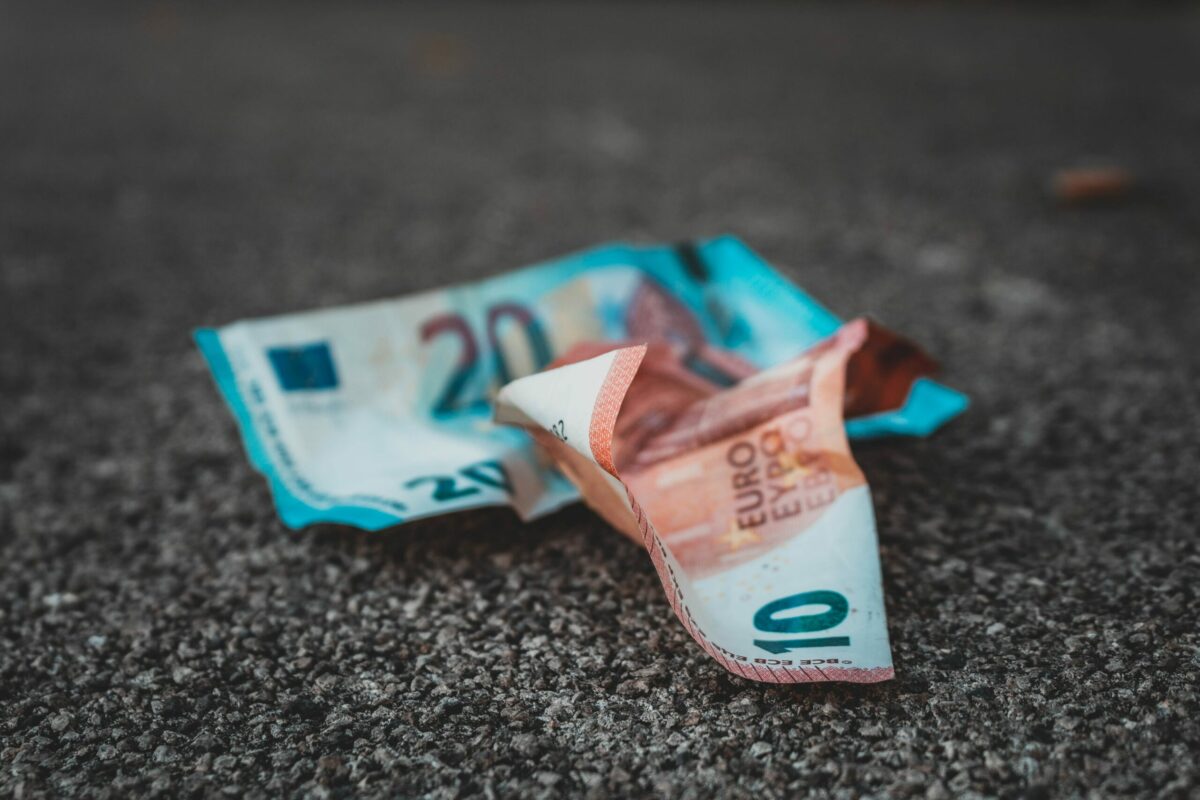 “We are printing money, we are creating government bonds, we are borrowing on unprecedented scales. Those are things that surely create more of a risk of a sharp dollar decline than we had before”. These are words from Larry Summers, Former Chief Economist of the World Bank, as concerns over inflation continued to rise amidst a heavily short market.

The Federal Reserve indicated that they are edging towards a discussion about tightening monetary policy, as the dollar held against the euro and the yen this week.

Gold is widely regarded as an asset for hedging against Inflation, but it is important to reiterate Bitcoin’s case. And another cryptocurrency, which might be falling into a new light.

Gold vs Stock: the CPI conversation

When it comes to the basic understanding of the effects of inflation, it translates to the reduction of purchasing power. Therefore, investing in assets during inflation should aim to appreciate more than the CPI i.e the Consumer Price Index. CPI includes the cost of services, utilities, food, transportation, etc which goes up during inflation hence reducing cash purchasing power.

Talks about inflation always lead to the idea of buying gold, and according to data, it has been effective…sometimes. 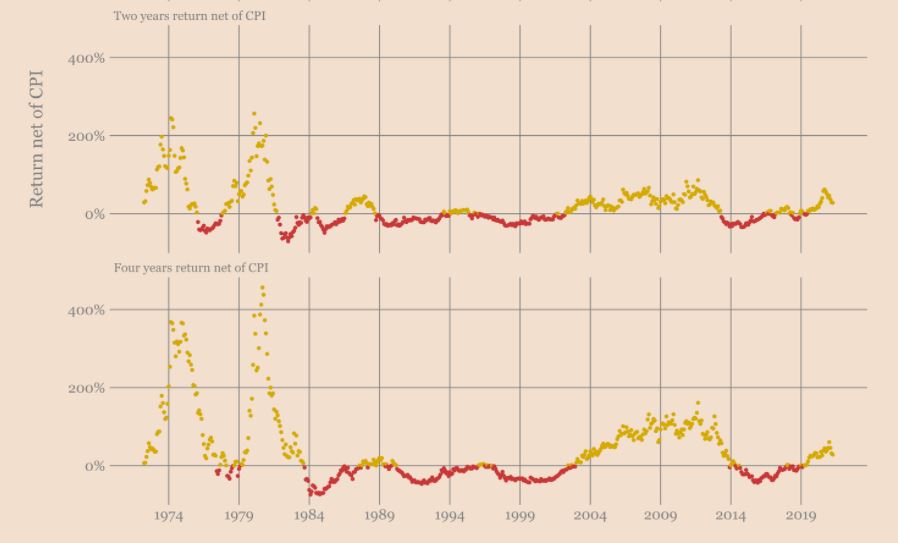 Analyzing hedging against the mid-inflation period i.e 1-4 years, it can be observed that gold was a brilliant hedge during the 1970s and early 2000s. However, during the 80s and 90s, gold did not perform as well as expected. The main issue was that it became a commonality for people to buy gold to tackle inflation. When inflation wasn’t the concern, gold didn’t really perform to improve more than the CPI. So, it was more like cyclic protection.

Stock provided a similar safety net. However, investing in stocks would not have protected investors against inflation in the 70s. It performed well in the mid-80s, and through the 2000s, it was neutral. 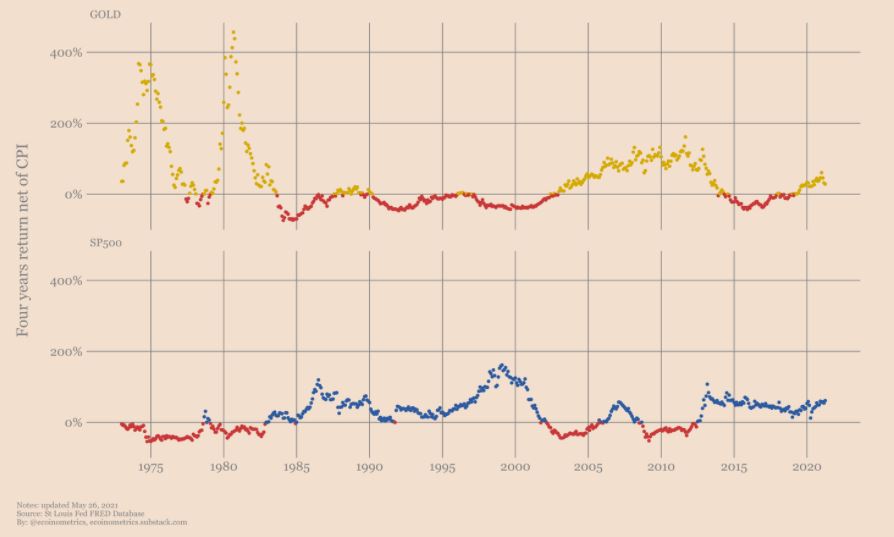 The revealing factor was that Gold and Stocks provided protection in cycles against inflation, and they followed the opposite paradigm. Hence, investors possibly do not have a track record of recovery in both cycles, consistently.

The case for Bitcoin as an inflation hedge has been discussed on an extensive level but the recent decline raised criticism yet again. However, when we crunch down the numbers, Bitcoin has a different story to tell. 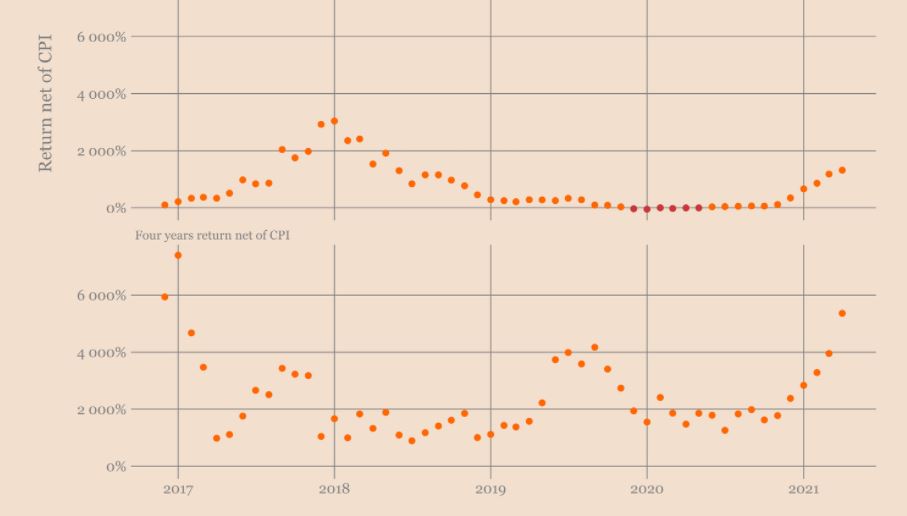 Bitcoin might not be the answer to inflation yet, but it’s place is undeniable in the present conversation.

Now, with Ethereum, it can be considered a surprise inclusion.
A misconception with digital assets is that coins without a fixed supply will act as inflationary currencies, whose market value will decrease in time. Bitcoin maximalist regularly raises this concern against Ethereum, whenever ETH is considered as a store-of-value.

While Bitcoin has a fixed supply, Ether follows a fixed issuance schedule, where every block issues coins into circulation.  No matter the number of active users, number of transactions, or the market price of ether, the total supply is programmed to increase gradually.

However, this is where it gets interesting. For a long time, the fixed issuance schedule of ether has undergone alterations. 4 years back, it was 5 ETH/per block. 2 years before, it was 3 ETH/block and currently it is down to 2 ETH/block. So technically, the supply is reducing, and ETH demand has certainly outpaced supply growth.

EIP 1559 can change everything

Ethereum is now reaching a point, where fee-burning protocol will further reduce ETH supply. EIP 1559, the controversial yet highly anticipated protocol is supposed to go live in the next couple of months, and depending on the activity of the network, EIP 1559 could burn more ether through base fees than the amount of new ether issued into circulation through miner block rewards.

Now the long-term outcome is definitely not guaranteed. Yet, Ethereum is beginning to tick the right boxes, and with Bitcoin, it can make its presence known, in the inflation-hedge debate.

3 reasons why this event will push Cardano in this direction