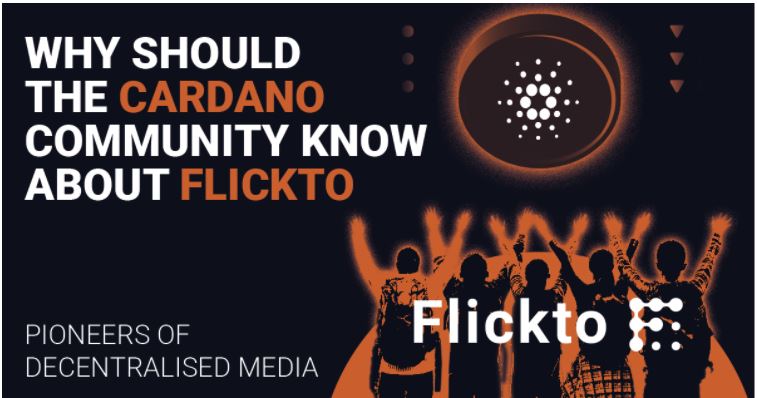 If there was a word to encapsulate Flickto, it would be disruptive. Not in a sense of nuisance or arrogance, but more of a renaissance. The Cardano ecosystem has heard whispers of “Decentralised Media”, a term that is pioneered by Flickto. It aims to give the power back to content creators as well as the consumers. For too long, media conglomerates have centralized the power between a select few hands, diminishing the chance for creativity to be expressed to its deserved degree.

Charles Hoskinson, the founder of Cardano, is well known for his vision of a decentralized future which has caught traction with millions of people around the world. DeFi has been an emerging technology that is revolutionizing traditional finance through creating a decentralized space that encourages trust, accessibility, and efficiency. The way that Cardano is “enabling economic empowerment to those who need it the most” is synonymous with the ethos of Flickto in its mission to build positive, meaningful and unbiased narratives.

New industries always follow a first-mover advantage that can be utilized. Flickto has made its inception into this space as a Cardano-powered media incubator providing an alternative to traditional financing and business models that places unique human experience and diversity at the forefront while aiming to generate sustainable profits from the projects that the community help to develop, produce and distribute.

How does Flickto utilize Cardano?

Blockchain’s technology assimilates into a more accessible and universally available network is evident through the smart contract developments that enable communities to safely get behind projects, thus accelerating their development. With courtesy of the Cardano Proof of Stake mechanism, it has allowed for funding through an ISPO model, which stands for Initial Stake Pool Offering. Staking ADA with the $FLICK token provides you with a great community environment, that directly impacts projects that promote diversity and positive influences through multiple measures;

To ensure fairness, the staking of the $FLICK token is tailored to have proportional representation to prevent those with larger holdings getting an unfair voting advantage, especially as this would be counterintuitive to Flickto’s objectives.

As hinted at in the introduction, this term, coined as DeMe, fundamentally is the concept of distributing decision-making power from a centralized authority (Hollywood, big money, legacy media corporations and politics) to the consumers, creators and communities who interact with the media. The media space has a wealth of influence, yet there has been a stagnation in the levels of creativity we have seen. This is only to mention one of the overarching issues that can be found with a centralized structure, which fuels the immense budgets for feature films as well as adding to the power structures established that create a secluded system that blocks out underrepresented communities.

To keep the ball rolling, Flickto and Muesli Swap will be holding a live twitter space on Thursday at 5pm, which will be one not to miss as Muesli Swap’s CEO will be there to answer any questions! More information on the partnership will be discussed and be sure to check out the socials below.

Ethereum ‘Merge’: The final public testing phase for ETH is slated on…